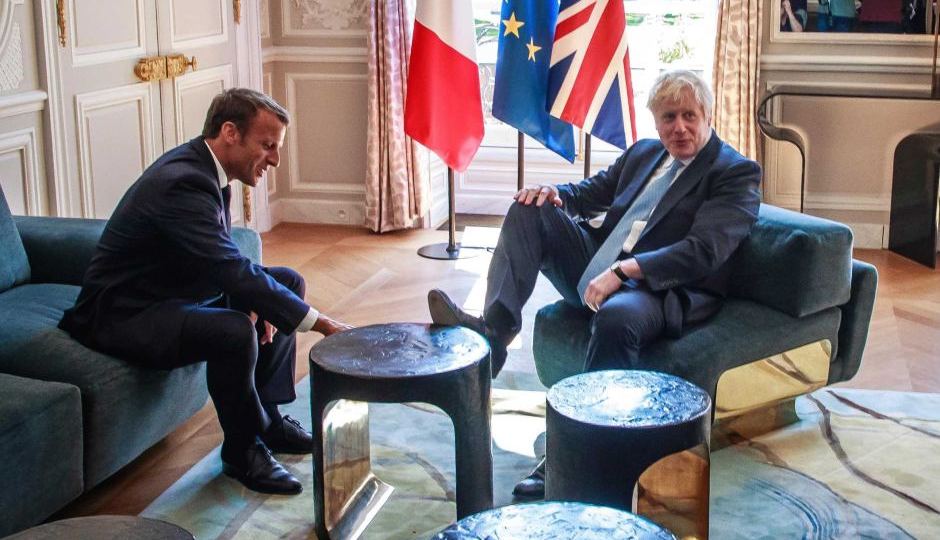 Britain's Prime Minister Boris Johnson gets comfortable with Mr Macron during their meeting at the Elysee Palace. Photo: AAP

Mr Johnson met Mr Macron at the Elysee Palace a day after talks in Berlin with German Chancellor Angela Merkel, who challenged Britain to come up with acceptable alternatives to the agreed safety net provision for the UK-Irish land border.

More than three years after the United Kingdom voted to quit the European Union, it is still unclear on what terms — or indeed whether — the bloc’s second largest economy will leave the club it joined in 1973.

Talks over lunch were constructive, a French official said.

Mr Macron left the door open to Britain seeking a solution to the Irish “backstop”, but said any alternative must respect both the integrity of the EU single market and stability on the divided island of Ireland.

In the month ahead, we will not find a new withdrawal agreement that deviates far from the original.”

On his first trip abroad since entering 10 Downing Street a month ago, Mr Johnson has warned Ms Merkel and Mr Macron they face a potentially disorderly no-deal Brexit on October 31 unless the EU does a new deal.

Speaking in The Hague, Ms Merkel said she had not meant to set a deadline when saying on Wednesday a solution to the Irish border issue could be found within 30 days, but to “highlight the urgency”.

The British pound, sensitive to the prospect of a “no-deal” exit, rose 1 per cent against both the dollar and the euro on her comments.

WATCH: Here’s the Reuters video of Boris Johnson putting his foot on the Elysee furniture. It seems President Macron was making small talk suggesting the table would work equally well as a footstool should the PM want to recline, which Johnson then jokingly does pic.twitter.com/dnv37t9mS4

Mr Johnson told Mr Macron that he believed it was possible to agree a deal before October 31, and that he had been “powerfully encouraged” by what he had heard from Ms Merkel on Wednesday.

“Let’s get Brexit done, let’s get it done sensibly and pragmatically and in the interests of both sides and let’s not wait until October 31,” Mr Johnson said.

Let’s get on now in deepening and intensifying the friendship and partnership between us.”

Mr Johnson is betting the threat of “no-deal” Brexit turmoil will convince Ms Merkel and Mr Macron that the EU should do a last-minute deal to suit his demands.

He has repeated promises to leave on October 31 — with or without a deal.

He said the EU did not want a “no-deal” scenario, but would be ready if it happened.

Mr Macron said any new solution to the problem of the Irish border had to be found in the next month.

Signalling the ball was in the UK’s court, he said: “If we cannot find alternatives, then it will be because of a deeper problem, a political one, a British political problem.”

And for that, negotiations can’t help. It will be up to the Prime Minister to make that choice, it won’t be up to us.”

The political crisis in London over Brexit has left allies and investors puzzled by a country that for decades seemed a confident pillar of Western economic and political stability.

Many investors say a “no-deal” Brexit would hurt the economies of Britain, the EU and the wider world, roil financial markets and weaken London’s position as the pre-eminent international financial centre.

After Brexit, the frontier between Ireland and the UK province of Northern Ireland will be the only land border between the EU’s single market and Britain.

The EU wants to ensure it does not become a back door for goods to enter the single market – which guarantees free movement of goods, capital, services and labour.

Ireland for its part says physical checks could undermine the 1998 Good Friday agreement, which brought peace to Northern Ireland after more than 3,600 died in a three-decade conflict between unionists who wanted the province to remain British and Irish nationalists who want it to join a united Ireland ruled from Dublin.

The backstop, negotiated by Mr Johnson’s predecessor Theresa May, provides for Britain to remain in a temporary customs union with the EU after Brexit, avoiding the need for any “hard” border infrastructure, until a better solution is found.

But Mr Johnson said in Paris: “Under no circumstances will the UK government be instituting, imposing, checks or controls of any kind at that border.”

“We think there are ways of protecting the integrity of the single market and allowing the UK to exit from the EU.”

Brexit supporters acknowledge there may be short-term disruption from a ‘no-deal’ exit but say the UK will thrive if cut free from what they cast as a doomed experiment in integration that has led Europe to fall behind China and the United States.