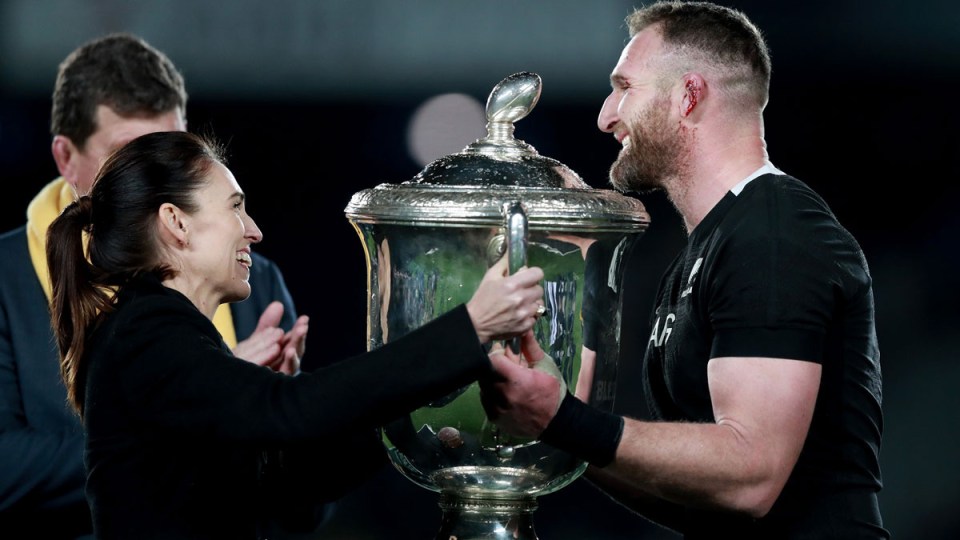 Jacinda Ardern had a plush reason to smile after New Zealand condemned the Wallabies to another Bledisloe Cup loss. Photo: Getty

Prime Minister Scott Morrison has been forced to tow a furry companion around Canberra for an entire week after losing a Bledisloe Cup bet to New Zealand prime minister Jacinda Ardern.

The Wallabies, searching for its first series triumph over the All Blacks in 18 years, instead suffered a humiliating 36-0 blackout at the New Zealand side’s Eden Park fortress over the weekend.

And it seems the nation’s highest office bearer had plenty riding on the result.

His counterpart across the ditch revealed the outcome of their friendly wager on Monday afternoon, posting a photo to Instagram showcasing Mr Morrison’s new buddy sitting on his Canberra office desk.

A little wager with the Australian Prime Minister before the Rugby may or may not be why he now has this kiwi companion for the rest of the week. Thanks for being a good sport @scottmorrisonmp

“A little wager with the Australian Prime Minister before the Rugby may or may not be why he now has this kiwi companion for the rest of the week. Thanks for being a good sport @scottmorrisonmp,” Ms Ardern wrote.

One can imagine discussions over the plush punishment played out alongside heated climate talks at last week’s Pacific Islands Forum, in which Ms Ardern declared Scott Morrison must ‘answer to the Pacific’.

But Ms Ardern may have to invest in more plush pals before the upcoming Rugby World Cup, with South African-born comedienne Urzila Carlson challenging her to another wager.

“You’ll both have to get little springboks for the World Cup…” Ms Carlson replied.

The Australian men’s national rugby union side provided Mr Morrison false hope of vanquishing its Bledisloe hoodoo when it obliterated its New Zealand rivals 47-26 in Perth the previous week.

But like other Australian rugby fans, he’s now been left wanting for another year.

However, it’s not the first time the trans-Tasman figureheads have locked horns over the sport.

Former prime minister Malcolm Turnbull was forced to don an All Blacks tie in Parliament after losing a bet to then-New Zealand prime minister John Key in 2015.