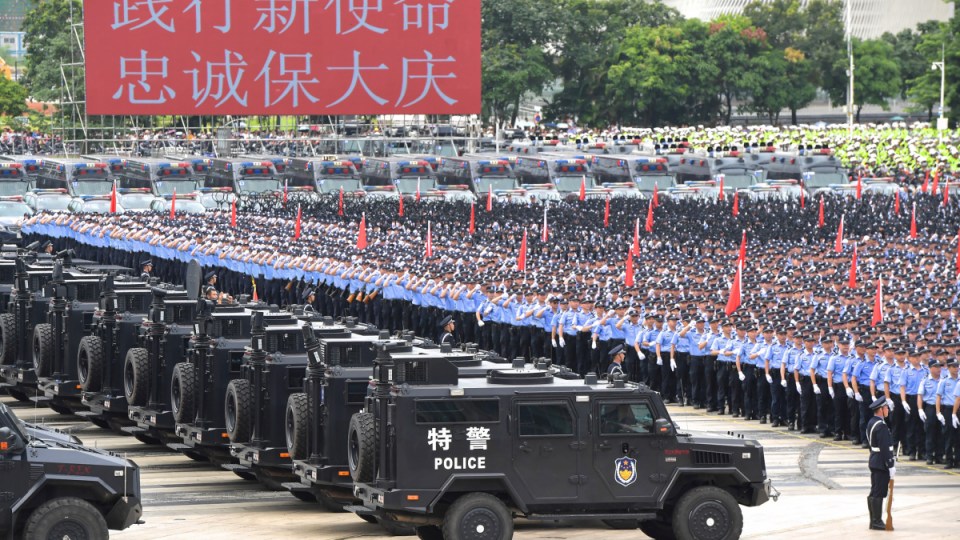 Chinese police took part in a drill on August 6 at Shenzhen, across the border from Hong Kong. Photo: AFP/Getty

Hong Kong is bracing for more mass protests over the weekend as China warned it could use its power to quell demonstrations.

The warning came as US President Donald Trump urged Chinese President Xi Jinping to meet personally with the protesters to defuse weeks of tensions.

The exercises came after the US State Department said it was “deeply concerned” about the movements, which have prompted worries that the troops could be used to break up protests.

Ten weeks of confrontations between police and protesters have plunged Hong Kong into its worst crisis since it reverted from British to Chinese rule in 1997.

The Civil Human Rights Front, which organised million-strong marches in June, has scheduled another protest for Sunday.

China’s ambassador to London issued a stark warning, saying Beijing could use its power to quell the Hong Kong protests if the situation deteriorated further, repeating charges that some protesters had shown “signs of terrorism”.

“The central government will not sit on its hands and watch,” Liu Xiaoming told reporters.

“We have enough solutions and enough power within the limits of (the) Basic Law to quell any unrest swiftly,” Liu added, referring to Hong Kong’s mini-constitution, which states that the Hong Kong government can ask the Chinese garrison in the city to help maintain order.

The Friday edition of China’s influential state-controlled Global Times tabloid also warned that China had the option to “forcefully intervene”, and lashed out at what Beijing describes as US interference in Hong Kong.

“If Hong Kong cannot restore the rule of law on its own and the riots intensify, it’s imperative then for the central government to take direct actions based on the Basic Law,” it said, saying the Shenzhen PAP deployment was “a clear warning”.

The paper said the situation in Hong Kong “won’t be a repeat of the June 4th political incident in 1989”, referring to the bloody military crackdown on pro-democracy demonstrations in Beijing’s Tiananmen Square 30 years ago.

White House national security adviser John Bolton warned against a repeat of Tiananmen in an interview on Wednesday, and Trump on Thursday urged Xi to meet with the protesters, saying it would lead to an end to tensions.

“If President Xi would meet directly and personally with the protesters, there would be a happy and enlightened ending to the Hong Kong problem. I have no doubt!” Trump tweeted.

If President Xi would meet directly and personally with the protesters, there would be a happy and enlightened ending to the Hong Kong problem. I have no doubt! https://t.co/eFxMjgsG1K

A statement from China’s foreign ministry on Thursday said Beijing had noted Trump’s comment that Beijing needed to resolve the crisis in Hong Kong on its own, while Liu, the Chinese ambassador in London, accused unidentified foreign forces of fomenting the protests.