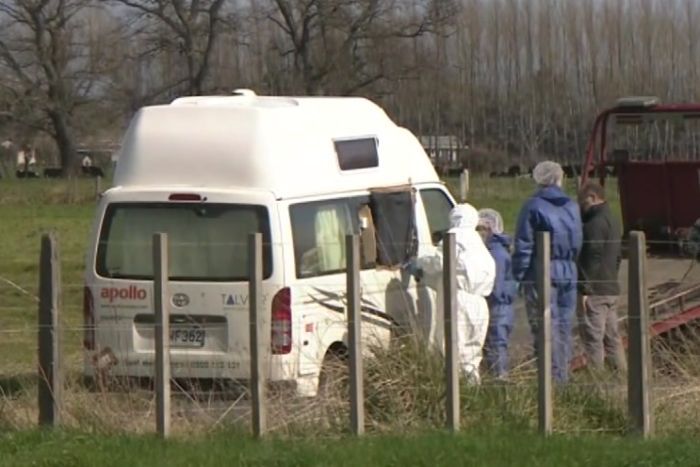 A major manhunt is underway in New Zealand for a gunman after an Australian man was shot dead in a random attack in a coastal town on the north island.

Sean McKinnon, 33, was killed while sleeping in an Apollo rental campervan in Raglan, outside Hamilton, about 3am on Friday.

A manhunt for the gunman is under way.

“This is a tragic incident. Inquiries indicate that this was a random attack,” Detective Inspector Graham Pitkethley told reporters in Hamilton on Friday.

Mr McKinnon was sleeping in the campervan with his 32-year-old Canadian fiancee Bianca when the gunman fired a number of shots into the vehicle.

Police said she escaped and fled to a nearby property to raise the alarm, while the gunman stole the campervan with the dying Mr McKinnon inside.

Mr McKinnon was from southwest Victoria.

“He loved to to surf big waves down the coast. He charged five metre waves,” Mr Smith said.

“Seanny Mac was always a legend. He would do somersaults off the Port Campbell pier with the kids. He always had time for everyone.”

Raglan is a well-known surfing spot for big-wave surfers. Mr McKinnon’s campervan was parked in the Te Toto Gorge track carpark, not far from the water.

Police say the gunman demanded the keys to a white 2017 Toyota Hiace campervan before shooting the Australian.

Detective Inspector Graham Pitkethley told reporters in Hamilton on Friday police were notified about 3.20am that an offender had approached a van and shots were fired”.

About 8am on Friday, police located the van with the man’s body inside on Gordonton Road, 80km away from the Raglan crime scene.

A manhunt has been launched across the Waikato district to find the gunman.

Detective Inspector Pitkethley said police are working on the assumption the gunman is still armed. He also called for any witnesses who saw the campervan after the shooting to come forward.

“It is understandable and concerning to have an armed offender outstanding but I want to reassure the public we are working hard to identify and locate the offender.

“It is our absolute priority,” he said.

Forensic police are examining the campervan for evidence.