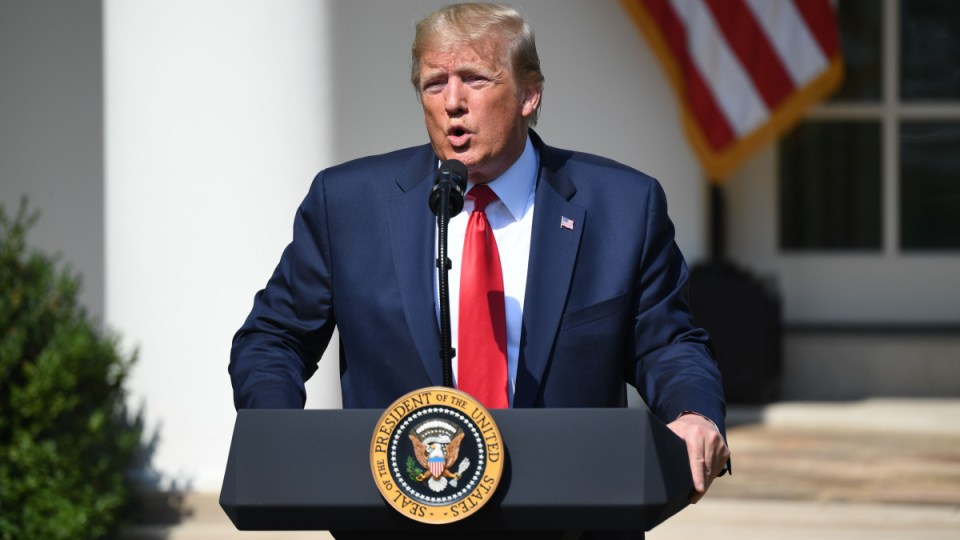 Donald Trump has weighed in on the Hong Kong protests. Photo: Getty

US President Donald Trump has tied the possibility of a trade agreement with China to a peaceful resolution to the pro-democracy protests in Hong Kong.

Mr Trump, who took to Twitter on Thursday to request a personal meeting with Chinese President Xi Jinping, said China must treat the former British colony “humanely” before any deal is struck.

“Of course China wants to make a deal. Let them work humanely with Hong Kong first!” Trump said on Twitter.

“I have ZERO doubt that if President Xi (Jinping) wants to quickly and humanely solve the Hong Kong problem, he can do it. Personal meeting?” Trump said.

I know President Xi of China very well. He is a great leader who very much has the respect of his people. He is also a good man in a “tough business.” I have ZERO doubt that if President Xi wants to quickly and humanely solve the Hong Kong problem, he can do it. Personal meeting?

On Wednesday, the Dow Jones Industrial Average lost 800 points, or 3.05 per cent – its biggest percentage drop of 2019.

Also on Wednesday, the Office of the US Trade Representative (USTR) said it would delay tariffs some Chinese products – including “cell phones, laptop computers, video game consoles, certain toys, computer monitors, and certain items of footwear and clothing” – until December 15.

“We’re doing it just for Christmas season, just in case the tariffs have an impact on US customers,” Mr Trump said.

A US State Department spokeswoman said on Wednesday that the US was “deeply concerned” about Chinese paramilitary movement on the Hong Kong border.

Chinese state media has said the vehicles were gathered in the area for military exercises, and not directly due to the unrest in Hong Kong, However, the massing came shortly after the central government in Beijing said weeks of pro-democracy protests in the former British colony were beginning to show the “sprouts of terrorism”.

The State Department’s expression of concern came after senior US politicians from both the Democratic and Republican parties called on Mr Trump to take a tougher line with China as worries grew over a possible Chinese intervention in Hong Kong.

Mr Trump, who has been seeking a major deal to correct trade imbalances with China, has faced criticism from Congress and elsewhere for not taking a stronger public line on Hong Kong and for his characterisation of the protests earlier this month as “riots” that were a matter for China to deal with.