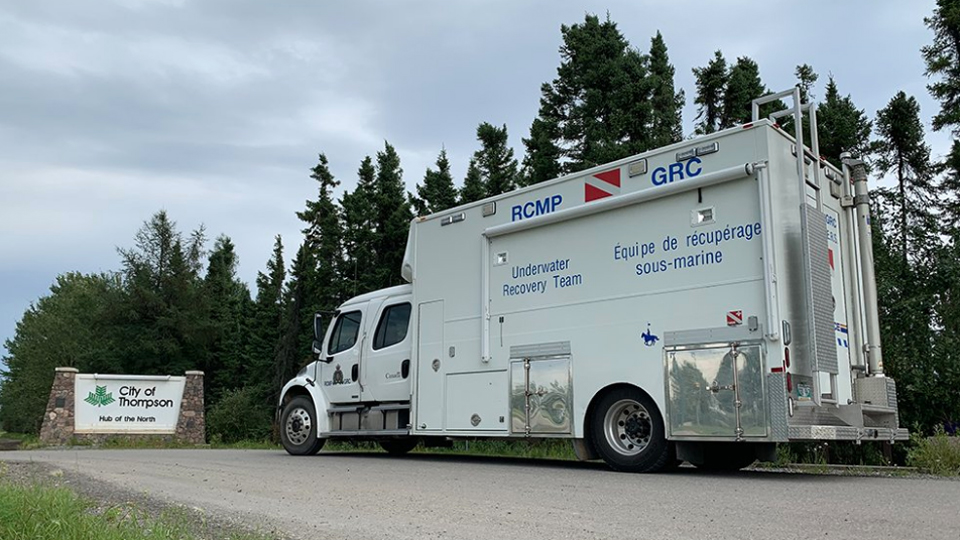 Canadian police brought in specialist divers to search for the teenagers. Photo: Twitter/RCMP

Teenage fugitives Kam McLeod and Bryer Schmelgsky appear to have fled into the wilderness, with police confirming they have found items “directly linked” to the duo on the banks of a river in northern Manitoba.

McLeod and Schmelgsky, both 19, are suspected of embarking on a murderous highway rampage in Canada last month that left Australian tourist Lucas Fowler, his US girlfriend Chynna Deese and botanist Leonard Dyck dead.

The discovery of the items on the edge of the Nelson River on Friday, near the remote town of Gillam, led the Royal Canadian Mounted Police to send a dive team to search the waterway on the weekend.

The RCMP kept the discovery of the items a secret until Tuesday.

They declined to say what the items are.

“To ensure the integrity of the investigation, no further information about the items will be provided at this time,” the RCMP said.

On Aug 2, several items directly linked to the suspects were found on shoreline, 9km along the Nelson River. RCMP Underwater Recovery Team did not find additional items. Roadblock on PR 290 has been removed, but officers remain in the Gillam area. #rcmpmb https://t.co/eHFxdLg6UM

The items were found near where a damaged and abandoned rowboat had been found earlier, sparking a search of the river by specialist divers.

The site was also about nine kilometres from where the duo are suspected of setting fire to their Toyota RAV4 getaway car on July 22 near Gillam.

McLeod and Schmelgsky have vanished since then, with no confirmed sightings announced by the RCMP.

The RCMP said divers did a thorough underwater search for about 29 metres around the area where the boat was found but “the search did not uncover any additional items linked to the suspects”.

On Friday afternoon, #rcmpmb officers searching from a helicopter, located a damaged aluminum boat on the shore of the Nelson River. RCMP Underwater Recovery Team (URT) will conduct a thorough underwater search of significant areas of interest today. pic.twitter.com/NwewjD9qH1

After the discovery, police set up a roadblock at the nearby ghost town of Sundance and sent in more officers.

Authorities continue to search the wilderness around the remote town of Gillam.

The rampage began on July 15 more than 3000 kilometres west, in the province of British Columbia when Mr Fowler, 23, the son of a high-ranking NSW police officer, and his girlfriend Ms Deese, 24, were found shot dead and left in a ditch on the side of a BC highway.

The body of Professor Dyck was discovered four days later on another BC highway, two kilometres from an abandoned and burning pick-up truck that had been driven by Schmegelsky and McLeod.

Schmegelsky and McLeod drove a stolen grey Toyota RAV4 3000 kilometres east to Gillam before torching it and apparently fleeing into the wilderness.

Survival experts said the teenagers have would struggle to stay alive in the swampy, bug-infested wilderness for more than a week without appropriate clothing and shelter.