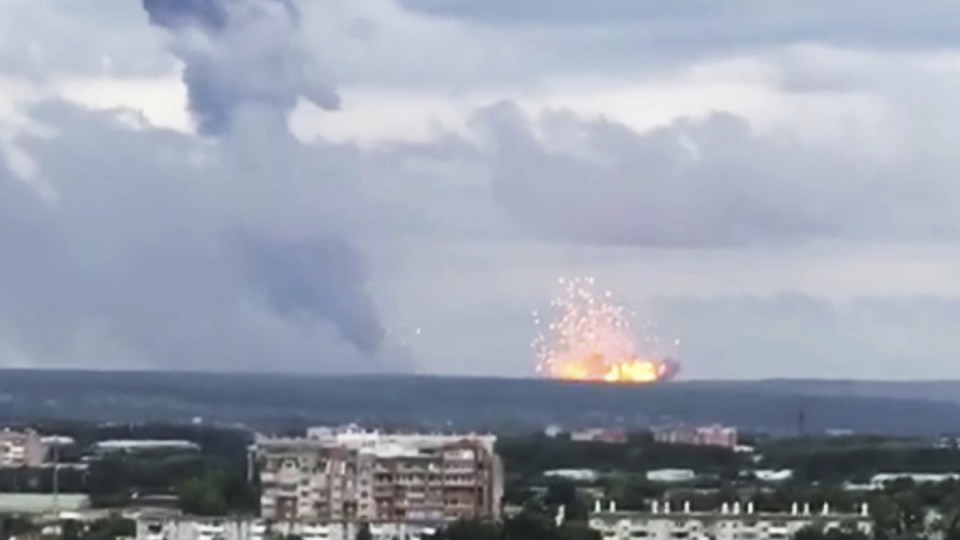 The ammunition explosions, seen from about 10 kilometres away. Photo: AAP

One person has reportedly been killed and at least seven injured, including a child, after a series of massive explosions at an ammunition store on a Siberian military base.

Nearly 3000 people have already been evacuated from villages within 20 kilometres of the base in Russia’s far east, with authorities intending to evacuate nearly 20,000 in total.

Photographs of the incident showed flames reaching high into the sky above the Krasnoyarsk Territory Arsenal, followed by clouds of belching black smoke that continued into the night.

“Ammunition has been exploding for five hours by now … Several thousand pieces have blown up,” a source told Russia’s state-run TASS news agency.

The blasts started about 1pm on Monday (Moscow time) and the depot reportedly contained tens of thousands of artillery shells. A state of emergency was declared in the Achinsk district as blasts continued to rock the dump.

“The shells are exploding one by one. Haze and smoke are drifting from there,” he said.

TASS said it had been told at least one soldier had died, although that report was denied by the country’s Defence Ministry.

Video from local girls basketball team that was on workout when explosions happened pic.twitter.com/f08Rqs4QfY

Children at a nearby summer camp were taken to safety while soldiers at the base hid in bomb shelters.

An aluminium refinery just 30 kilometres from the military base has also suspended operations. It has evacuated all but essential staff as a safety precaution.

The cause of the blast was not immediately clear.