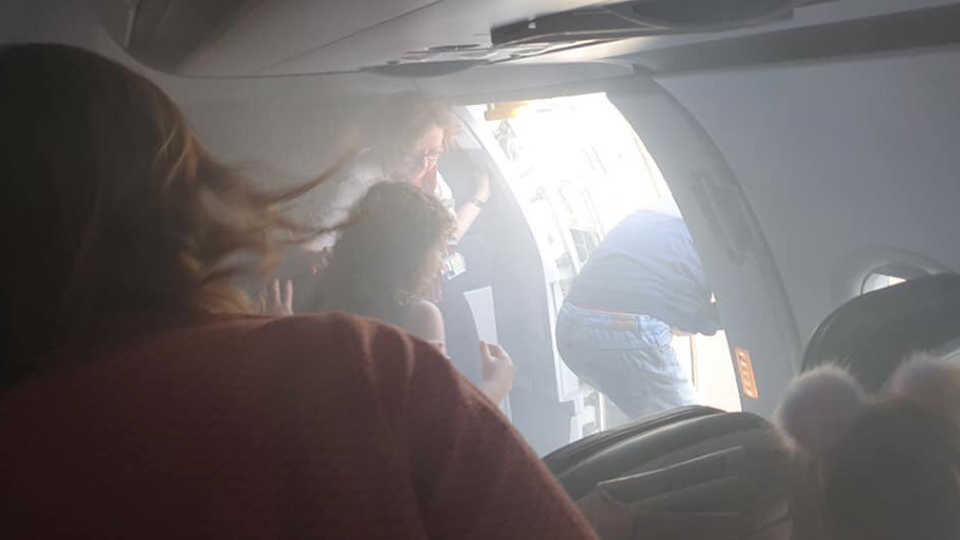 Passengers were ushered off the smoke-filled plane and down emergency slides. Photo: Twitter

Passengers onboard a British Airways flight have told of their horror after the plane’s cabin suddenly filled with smoke just minutes before landing.

British Airways confirmed an “incident” had occurred on the flight, which left London on Monday at 3.10pm (local time) bound for Spain.

Passenger Rachel Jupp, who was with her children, told BBC News smoke filled the cabin “very quickly” about 10 minutes before the plane’s scheduled landing in Valencia.

As the Airbus A321 aircraft began to descend quickly, Ms Jupp said she heard calls for passengers to “get down” so they could breathe cleaner air near the floor of the aircraft.

She said the pilot, who she believed was wearing a gas mask, did a “really good job” to make a “pretty smooth landing”.

After flight BA422 touched down, passengers slid down emergency chutes onto the runway. On the instructions of emergency workers, they then ran as far from the plane as possible.

British Airways has apologised to passengers onboard the flight, but has faced criticism for its “shocking” handling of the incident.

Passenger Gayle Fitzpatrick said on Twitter there was no announcement about what was happening as white smoke appeared to flood the cabin through the air-conditioning.

#BritishAirways #Valencia #EmergencyLanding Still waiting to hear what actually happened on our British Airways flight from LHR to Valencia in which our cabin filled with smoke in the last 10 minutes of flight, had to disembark via emergency chutes. No comms 60 mins and counting! pic.twitter.com/UywuesxHeC

Some passengers said the lack of communication from British Airways added to the “terrifying experience”. Others were just thankful to have landed safely.

#british_airways shocking handling of the emergency scenario at Valencia. Plane full of smoke, no oxygen, no announcements on the plane and no staff dealing with anything in the airport. The most terrifying experience of my life and no reaction from you. Shocking!! pic.twitter.com/N4ljWSogRn

.@British_Airways terrifying experience on flight to Valencia. Felt like horror film. Thankfully everyone safe. Flight filled with smoke and had to be emergency evacuated. #britishairways pic.twitter.com/NT4Gtme9kl

Travellers who were delayed overnight were given free accommodation at a local hotel, said BBC News.