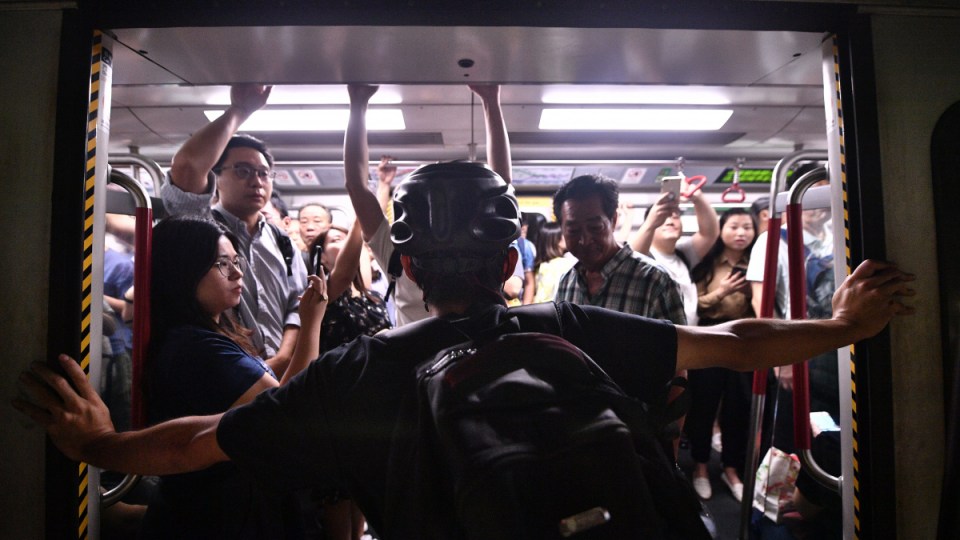 A protester holds up a commuter train by blocking its doors open on Monday morning. Photo: Getty

More than 200 flights have been cancelled at Hong Kong airport as a general strike called to support pro-democracy protests starts to bite.

Public broadcaster RTHK said on Monday that domestic carriers such as Cathay Pacific and Hong Kong Airlines were the most affected.

A citywide strike and demonstrations in seven districts in Hong Kong have been called for Monday afternoon. They follow a weekend of clashes with police on the streets.

There was also commuter chaos across Hong Kong on Monday morning as protesters blocked train and platform doors to prevent trains leaving stations during the peak hour.

Subway and train operator MTR said services had been partially suspended on four lines because of door obstructions.

Civil disobedience at its finest.🤣🤣🤣🤣

General strike in Hong Kong today, drivers in Tai Po are helping out by practicing their turning skills.#hongkongprotests #strike pic.twitter.com/Vb7kbEVJVP

The latest action brought chief executive Carrie Lam out to speak publicly on Monday, for the first time a fortnight. She warned that the protests might destroy Hong Kong.

Ms Lam said the protests that have gripped the former colony for months were a challenge to China’s sovereignty, and reiterated that the demonstrations were pushing Hong Kong to the verge of an “extremely dangerous situation”.

Ms Lam said protesters were using widespread disquiet against a proposed, then suspended extradition bill as a cover to hide “ulterior motives”.

“Those ulterior motives are going to destroy Hong Kong, to risk ‘one country, two systems’, and also to proceed with, what they call, revolution,” she said.

She again rejected calls for her to resign and said the government would be resolute in maintaining law and order.

Long lines of traffic could be seen across Hong Kong island leading into the heart of the business centre on Monday morning, and hundreds of people were stranded at the airport.

China’s official Xinhua news agency said on Sunday: “The central government will not sit idly by and let this situation continue. We firmly believe that Hong Kong will be able to overcome the difficulties and challenges ahead”.

The departures & arrivals boards of the Hong Kong Airport are displaying some 140+ cancelled flights for 5 August, the day of a planned major citywide strike. Here are just a few. Most are Cathay/Cathay Dragon flights. #HongKongProtests pic.twitter.com/RBkxR78DJU

Protests across Hong Kong throughout summer started as a movement against an extradition bill that would have allowed residents to be sent to mainland China to stand trial. They quickly expanded into demands for an investigation into alleged police abuse at protests and the dissolution of the legislature.

Tens of thousands of pro-democracy protesters returned to the streets on Sunday, calling for a general strike. One group briefly blocked access to the Cross Harbour Tunnel, causing traffic chaos, while others set up barricades on shopping streets.

The action brought the streets of Mong Kok, one of the world’s most densely populated areas, to a standstill as shops and malls shut their doors early in anticipation of possible clashes with riot police.

China is reported to have massed forces across the border in Guangzhou, raising fears the protests could be crushed as was Beijing’s pro-democracy movement by the Tienanmen Square massacre.