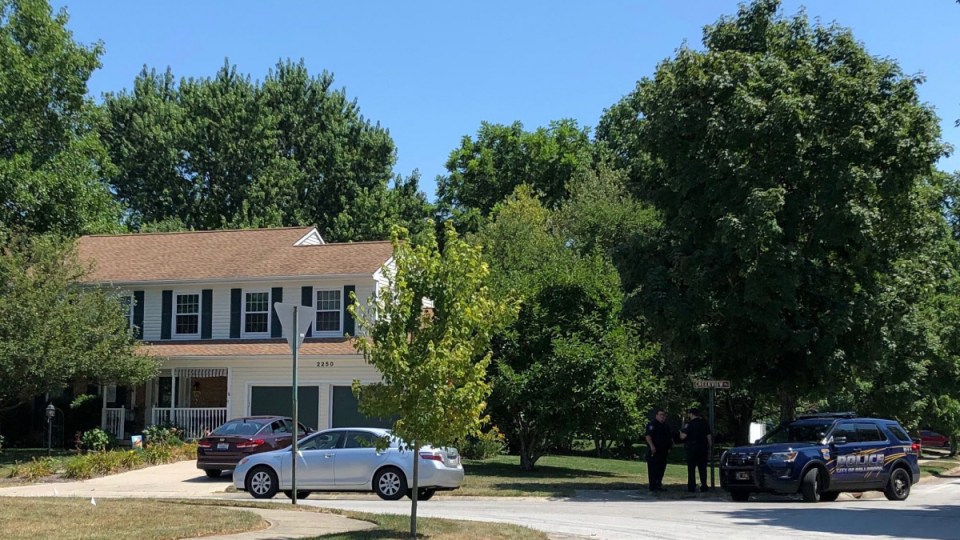 Police attend the family home of suspected shooter Connor Betts, whose sister was killed in the attack. Photo: AAP

The Ohio shooter’s sister is among nine innocent people dead and at least 26 injured in another mass shooting in the US early on Sunday.

Police say 24-year-old Connor Betts killed his 22-year-old sister Megan and eight others at or near Ned Peppers Bar on East Fifth Street in the city of Dayton’s Oregon District before he was fatally shot by police.

It comes just hours after the killing of at least 20 people in the US border town of El Paso, Texas.

US President Donald Trump has ordered flags to be lowered to half mast following the two shocking killings in the US in less than 24 hours.

Today, I authorized the lowering of the flags to half-staff at all Federal Government buildings in honor of the victims of the tragedies in El Paso, Texas, and Dayton, Ohio….

“We had officers in the immediate vicinity when this shooting began and were able to respond and put an end to it quickly.”

Dayton Mayor Nan Whaley said at a subsequent media briefing that the alleged gunman was carrying a .223-calibre rifle and had high-capacity magazines with him.

If the police had not responded so quickly “hundreds of people in the Oregon District could be dead today,” Ms Whaley said.

Lieutenant Colonel Carper earlier said there was no known motivation for the shooting, during which the “suspect was firing a long gun with multiple rounds at the victims”.

Dayton Daily News said it was working to confirm eyewitness accounts that a person who was denied entry into the bar opened fire.

Several area police departments responded to a “Signal 99” broadcast asking for all available police to respond to the district.

Agents with the FBI and ATF are also on scene.

The paper reported of a public Facebook post from a person named James Williams: “Sad people are not right. I’m safe. Happened right in front of the patio where I was sitting in front of Neds. The guy in front of Ned Peppers’ door is the active shooter.

“He tried to go into the bar but did not make it through the door. Someone took the gun from him and he got shot and is dead.

“There are at least eight people dead right by the picnic table where I was on the street. A bunch of people taken to the hospital. I don’t know how any … this place is a disaster.”

#OregonDistrict #update Lt. Col. Carper: at 1:22am active shooter situation began in oregon district. The shooter is deceased. There are 9 others also deceased. At least 16 others went to area hospitals with injuries.

A hospital spokeswoman said 16 shooting victims had been admitted for treatment.

The Oregon District is a historic neighbourhood near downtown Dayton that is home to bars, restaurants and theatres.

“We are devastated by this tragic, senseless event,” it said.

“We are incredibly thankful for the quick response of our Dayton Police Department and all first responders. We are heartbroken for the victims and their families.”