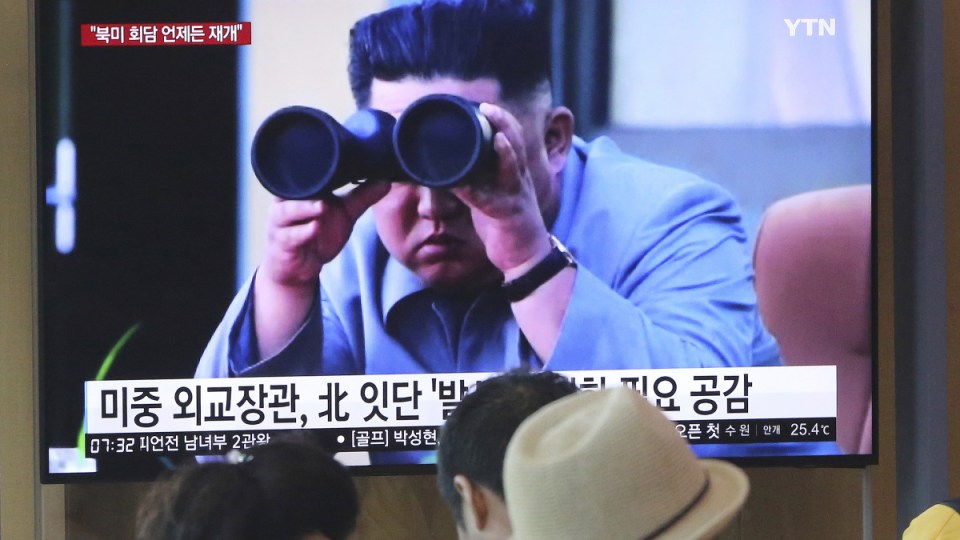 Kim Jong-un watches with 'great satisfaction' the three rounds of weapons tests during the past week. Photo: AAP

US President Donald Trump says recent test-firings of multiple rocket launcher systems by North Korea were “not a violation” of an agreement signed in Singapore by the two countries in 2018.

In a series of tweets on Saturday, Mr Trump said leader Kim Jong-un “does not want to disappoint his friend with a violation of trust”.

“There may be a United Nations violation.

“Chairman Kim does not want to disappoint me with a violation of trust, there is far too much for North Korea to gain – the potential as a Country, under Kim Jong Un’s leadership, is unlimited,” he wrote.

….Chariman Kim has a great and beautiful vision for his country, and only the United States, with me as President, can make that vision come true. He will do the right thing because he is far too smart not to, and he does not want to disappoint his friend, President Trump!

The range would be enough to cover the metropolitan area surrounding Seoul, where about half of South Koreans live, and a major US military base just outside the city.

Kim Jong-un reportedly expressed “great satisfaction” after supervising another test-firing of a new multiple rocket launcher system on Friday, a day after South Korea’s military said it detected North Korea firing projectiles twice into the sea off its eastern coast in its third round of weapons tests in just over a week.

He had supervised the first test of the same rocket artillery system on Wednesday.

Experts say the North’s increased testing activity is aimed at ramping up pressure on Washington and Seoul over stalled nuclear negotiations with the US and planned US-South Korea military exercises, and that its weapons displays could intensify in the coming months if progress in talks isn’t made.

A report by Pyongyang’s official Korean Central News Agency (KCNA) didn’t include any direct mention of the United States or South Korea.

South Korea’s presidential office had said the US and South Korean militaries shared an assessment that Friday’s launches were likely of short-range ballistic missiles.

South Korea’s military had also concluded the weapons North Korea tested on Wednesday are ballistic missiles and maintained its assessment even after the North described them as a newly developed “large-calibre multiple launch guided rocket system.”

North Korea said those tests were designed to deliver a “solemn warning” to South Korea over its purchase of high-tech, US-made fighter jets and the planned military drills, which Pyongyang calls an invasion rehearsal.

The North also tested short-range missiles on May 4 and 9.

On Thursday, Mr Trump said he wasn’t worried about the weapons recently tested by North Korea, calling them “short-range missiles” that were “very standard”.

Meanwhile, US Secretary of State Mike Pompeo, before leaving Bangkok for an ASEAN meeting of regional foreign leaders, said they were ready to continue diplomatic talks with North Korea.

“We stand ready to continue our diplomatic conversation with the North Koreans. I regret that it looks like I’m not going to have an opportunity to do that while I’m here in Bangkok. But we’re ready to go.”