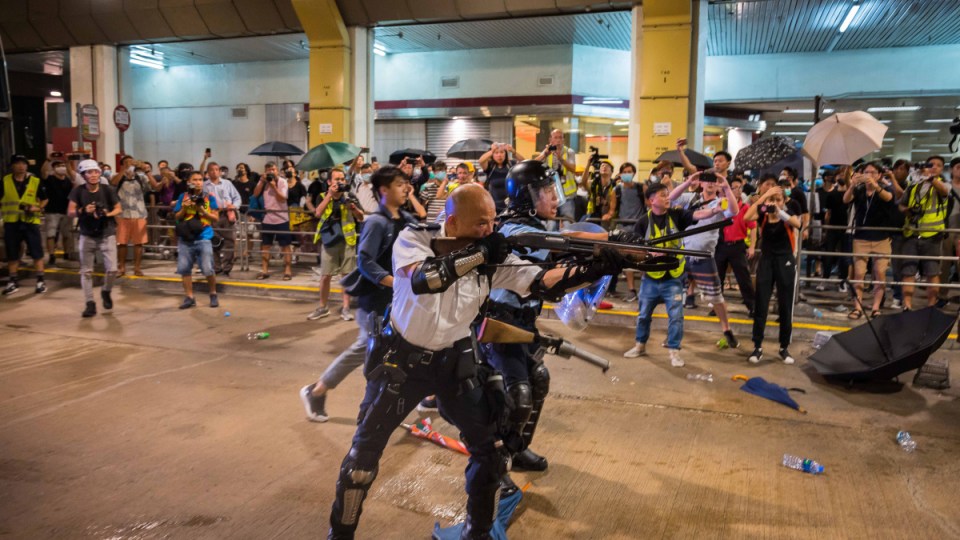 Violance has escalated between police and protestors. Photo: Getty

The US is monitoring a “congregation” of Chinese forces on Hong Kong’s border in a worrying sign the official response to protests against a controversial extradition bill might be about to escalate.

The nature of the Chinese buildup is unclear, but a White House official has told Bloomberg that it involves units of military or armed police.

China warned on Monday that the civil disorder in the former British colony had gone “far beyond” peaceful protest after police deployed tear gas over the weekend.

On Tuesday, it said the violence in Hong Kong was a “creation of the US”, a charge denied by the White House official.

In an editorial on July 25, The China Daily accused the US of turning a blind eye to vandalism by protesters in Hong Kong, saying it had instead “blithely talked about freedom of speech and the right to peaceful assembly”.

“Beijing will not hesitate to take whatever action it thinks necessary to defend the nation’s sovereignty and territorial integrity,” the editorial said.

Early on Wednesday, hundreds of people surrounded a police station in Hong Kong chanting “free the martyrs” after 44 activists were charged with rioting following the most recent clashes between protesters and police defending China’s representative office.

It was the first time the rioting charge has been used during protests that erupted over an extradition bill that would have allowed people in Hong Kong to be sent to mainland China for trial. Another man was charged with possession of an offensive weapon.

Police fired tear gas and rubber bullets on Sunday as they sought to defend China’s main representative office from protesters who set up road blocks and hurled bricks and sticks.

What started three months ago as rallies against the extradition bill, has evolved into a wider backlash against the city’s government and its political masters in Beijing.

The near daily protests have disrupted business, piled pressure on the city’s government and stretched its police force, which some have accused of using excessive force.

Late in July, an attack on protesters by a gang of men in white T-shirts, some armed with poles, was blamed on Chinese-backed triad gangs.

On Wednesday morning, hundreds of protesters gathered at the Kwai Chung police station, where some of the activists were to be freed on bail. Clashes broke out between the protesters and police. One officer brandished a gun to ward off the crowd.

Rioting carries a maximum 10-year jail term in Hong Kong. Activists say they have done nothing wrong and are only seeking justice. In the driving rain, many chanted “liberate Hong Kong,” and “revolution of our time”.

Please help HongKong and it’s people as the Chinese are gathering at its border.
They are a democratic country
They like us me deserve freedom
After all isn’t that a fundermental right if every human being on this planet
Isn’t this what we fight and die for
HongKong needs help

Besides calling for the extradition bill to be scrapped, rather than its suspension so far, protesters have also demanded the resignation of city leader Carrie Lam, an independent inquiry into the police’s handling of the crisis and the unconditional release of all those arrested.

Some of the activists were due to appear in court on Wednesday.

Paul Sullivan, an international security expert at the National Defense University, told Bloomberg that China views the Hong Kong protests in terms of their long-term impact on the regime’s central power.

“The Chinese most likely have a very long-term perspective on this, and they aren’t going to be one China and two systems anymore,” he said.

“My sense is that they want to completely chew up Hong Kong and make it part of the central part of China, maybe to improve their trading and economic base.”

Charles Lipson, a political science professor at the University of Chicago, told Bloomberg that the US’s options for intervention would be limited.

“There’s very little the US can do, should do, or will want to do prior to a major crackdown,” Professor Lipson said.