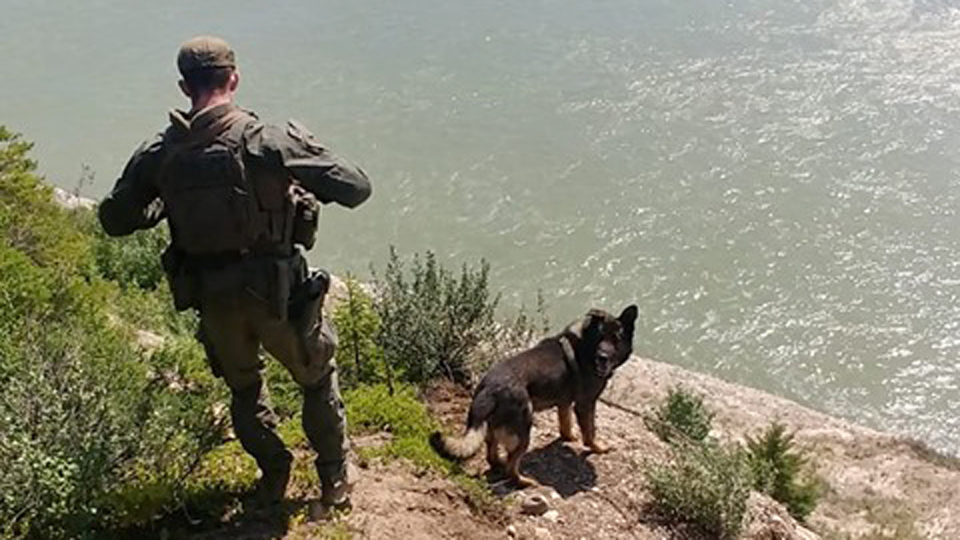 The RCMP has refocused its hunt for the missing teenagers back in Gillam. Photo: RCMP

The fugitive Canadian teenagers suspected of three murders were reportedly stopped by police as they fled eastwards across the country – only to be let go again.

Kam McLeod, 19, and Bryer Schmegelsky, 18, were stopped by indigenous police for a routine check for alcohol as they drove through a dry community in a Manitoba First Nations reserve on July 23, according to Canada’s Global News.

Band councillor Nathan Neckoway said the routine check came in Tataskweyak Cree Nation. It is near Split Lake, which is about 169 kilometres from Gillam, where the massive police and military manhunt for the pair has been centred for several days.

“We weren’t aware of their status, of them being wanted,” Councillor Neckoway said. “Apparently after they came to our community, that’s when they sent out that wanted [status].”

Canadian police have said the last confirmed sighting of Schmegelsky and McLeod was in Split Lake. They have evaded police for more than a week.

The two young men are the chief suspects in the murders of Australian Lucas Fowler and his American girlfriend Chynna Deese. They have also been charged with the shooting murder of 64-year-old Leonard Dyck – and have been labelled “Canada’s most wanted men” by local media.

On Monday, there were reports the teenagers had been spotted scavenging for food by a volunteer patrol group, the Bear Clan, which is helping to protect the remote Indigenous community of York Landing. York Landing is about 100 kilometres from Gillam.

Bear Clan founder James Favel told the ABC a patrol spotted a suspicious pair of men at a garbage dump, on the outskirts of the of the community.

“While doing perimeter checks on the First Nation [community] they came across two men who seemed to be scavenging food out of the garbage dump,” Mr Favel said.

“That struck them as odd of course, because everybody else is holed up in their residences, so they immediately reported to RCMP [Royal Canadian Mounted Police].”

Authorities descended on the remote York Landing community, whose 200 residents were told to stay inside with windows and doors locked. But, despite searching with helicopters, drones and on foot with dogs, nothing was found.

“They [the pair] did notice that they’d been spotted by our guys so they bolted right away,” Mr Favell said.

“They went across the road towards the lagoon and then disappeared into the tree line.”

The RCMP continues to urge people in the remote northern Canadian town to remain inside and lock their doors.

It is critical that residents of York Landing remain vigilant & stay indoors as much as possible with their doors locked, & to report anything suspicious by calling their local police immediately.

The Mounties said they had been unable to confirm if Monday’s sighting was actually Schmegelsky and McLeod. In a tweet on Tuesday morning (ADST), they said they would continue to devote resources to the York Landing and Gillam areas.

“Our officers on the ground have not made contact with the individuals, and so we are not yet in a position to confirm that these are the wanted suspects,” a police spokesperson said.

Mr Favel said he doubted the fugitives would get far in a very harsh landscape.

“This is very rough terrain and it would be very hard for them to make any real distance, so I think [the police] won’t let up until they catch them, if it is indeed them,” he said.

“Everybody is kind of on edge, there’s a huge police presence, they’re going door to door, so everybody’s freaked out a little bit.

“People have been sheltering in place, their lives have come to a halt during this process, and I just hope it comes to a peaceful resolution very shortly, so people can get back to their regular lives.”

No new sightings of suspects. Officers are searching cottages, cabins, waterways, & along the rail line for any signs of the suspects. This search of remote areas is being conducted both on foot & in the air. The terrain is immense & varied w/lakes, ponds, muskeg etc. #rcmpmb pic.twitter.com/9xp5eg8GnI

A member of the Manitoba Trappers Association told Canada’s APTN National News the climate and topography were tricky.

“We barely even had a summer,” said Ron Spence, who added the rivers would be swimmable but cold.

“With these heavy rains that we’ve been having, they’re going to have a challenge if they’re not experienced in bush life.

“We have rocky areas, swamp, muskeg. The bugs here are a reality — mosquitoes, sandflies and horseflies.”

Mr Spence also said traplines — routes along which hunters set traps for animals — ran for hundreds of kilometres across the region, and could be a problem for the fugitives.

“They could be strung up in somebody’s trap or keeping out of sight in a trapper’s cabin,” he said.

“No one’s checking them [the traps] right now.”