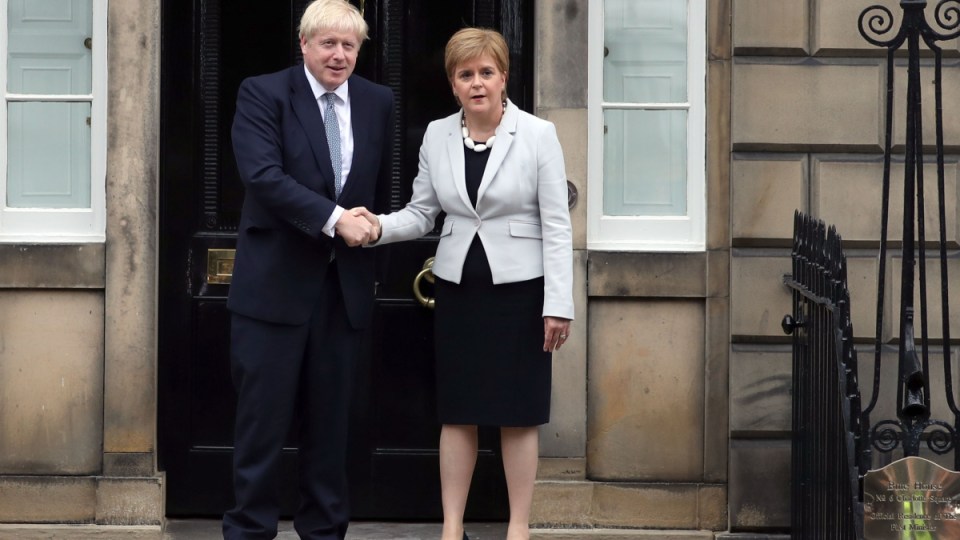 New British Prime Minister Boris Johnson has been booed during his first official visit to Scotland.

The boos came from a crowd gathered in Edinburgh for Mr Johnson’s meeting with Scottish First Minister Nicola Sturgeon on Monday (local time).

Mr Johnson and Ms Sturgeon shared a frosty handshake outside her official residence, Bute House, and posed for photos before heading inside.

Earlier, Ms Sturgeon had hit out at Mr Johnson and the potential no-deal Brexit the British government is preparing for on October 31.

“Scotland has been ignored throughout the Brexit process and it is now time for everyone who cares about the future of Scotland to come together to chart our own course and say to the Tories, stop driving our country towards disaster.”

During an earlier visit to the British submarine base at Faslane in Scotland, Mr Johnson debuted a new weatherproof jacket emblazoned with the title “Prime Minister” – and pledged to “go the extra thousand miles” to get a new exit deal with the European Union.

Boris Johnson has a jacket that says Prime Minister on it pic.twitter.com/wnYdM8gNJl

It came as Britain’s Daily Telegraph reported that his government will to launch the biggest government propaganda campaign since World War II to try to rally the public behind his Brexit plan.

His new Conservative government will spend £100 million ($A179 million) within three months as a major part of the campaign, the newspaper quoted government sources as saying.

It said the advertising drive would include “an unprecedented marketing blitz on billboards, radio and television”.

Ms Sturgeon tweeted that the idea was “a shameful waste of money” – setting up a feisty dynamic for the pair’s meeting.

Mr Johnson has vowed to withdraw Britain from the EU by October 31 –with or without a deal.

The Telegraph said the new PM had ordered his ministers to “go into overdrive to prepare for a no-deal exit”, launching daily cabinet briefings on the Brexit progress.

The British currency tumbled to a 28-month low on Monday after Mr Johnson’s statements.

Many investors have said a no-deal Brexit would send shock waves through the world economy, tip Britain’s economy into a recession, roil financial markets and weaken London’s position as the pre-eminent international financial centre.

Mr Johnson’s bet is that the threat of a no-deal Brexit will persuade the EU’s biggest powers – Germany and France – to agree to revise the Withdrawal Agreement that former PM Theresa May failed three times to push through parliament.

“The Withdrawal Agreement is dead, it’s got to go. But there is scope to do a new deal,” Mr Johnson said at Faslane.

“We are going to go ahead and come out of the EU on October 31.”

He also said that the Irish border backstop, designed to prevent the return of a hard border between Ireland and the British province of Northern Ireland, was “no good, it’s dead, it’s got to go”.

Under the backstop, Britain would remain in a customs union with the EU “unless and until” alternative arrangements are found.

The 27 other EU members, though, say publicly and privately that the Withdrawal Agreement, including the backstop, is not up for barter. Many EU diplomats say they believe an election in Britain is highly likely.

Mr Johnson’s promise to deliver Brexit, with or without a deal, has put him at odds with some in his party who oppose a “no deal” exit, including its Scottish leader Ruth Davidson.

“She is right to think that we should be going for a deal, not no deal,” he said.

“If our partners won’t move, won’t take out the backstop, won’t even begin to change that Withdrawal Agreement, they won’t compromise at all, then of course we have got to get ready for no deal.”

Gordon Brown, a Scot and a former prime minister, said this month Mr Johnson might be the last United Kingdom prime minister, as he might be on a collision course with Scottish nationalists.