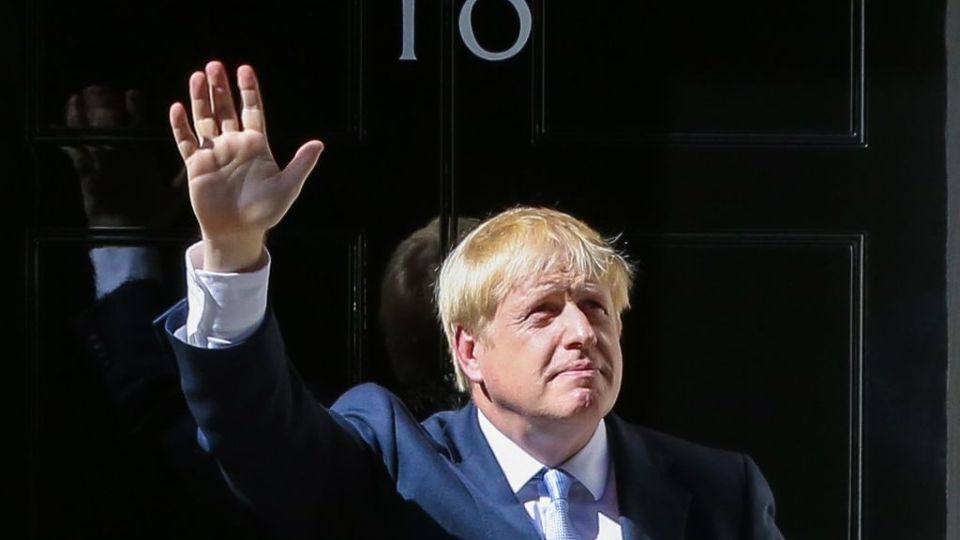 Even if his government falls, PM Boris Johnson will schedule an election for after Brexit's no-deal deadline. Photo: Getty

Boris Johnson has taken a knife to his predecessor’s cabinet on his dramatic first day as Britain’s new prime minister.

In what has been described as a “summer’s day massacre” by one Tory, more than half the cabinet has been sacked or resigned.

It is one of the biggest culls of senior government jobs in recent British history, with the ebullient new prime minister appointing his own hand-picked posse, offering key roles to leading Brexiteers.

After his official appointment with the Queen, Mr Johnson headed straight to Downing Street where he delivered his first address, deriding the “doubters, doomsters and gloomsters” who do not think he will succeed in finalising Brexit.

Protesters briefly halted progress of the motorcade en route to Buckingham Palace when climate change activists formed a human chain in The Mall.

(Greenpeace) Protesters blocking Johnson on the way to see the Queen. pic.twitter.com/wg1cAs2ron

Mr Johnson has set an absolute deadline of October 31 to exit the European Union – just 99 days away – and told his nation he would achieve this “no ifs, ands or buts”.

Standing outside 10 Downing Street on Wednesday, Mr Johnson said that “after three years of unfounded self-doubt, it is time to change the record”.

He is sending the strongest message yet to the EU that he will be taking a distinctly tougher approach to negotiating a revision of the Brexit divorce deal.

“We are going to fulfill the repeated promises of parliament to the people and come out of the EU on October 31, no ifs or buts,” Mr Johnson said.

Famed for his bravado, quips in Latin and blond mop of hair, Mr Johnson replaces Theresa May whose inability to deliver Brexit led to her downfall.

Ms May received a standing ovation from MPs at her final appearance as leader in the House of Commons chamber before she her own resignation appointment with the Queen.

She gave her final speech outside 10 Downing Street after saying her goodbyes to staff who lined the corridors, cheering and clapping.

In a moment of rare humour, as Ms May paid tribute to her husband Philip when a protester shouted “stop Brexit” to which May quipped: “I think the answer to that is, ‘I think not’.”

Mr Johnson gave Britons a glimpse at his priorities and policy plans in his first speech.

It was classic Johnson: upbeat but vague, a scattershot spray of promises from more police on the streets to better broadband to high animal welfare standards – and “a new deal, a better deal” on Brexit.

Many investors say a no-deal Brexit would send shock waves through the world economy, tip Britain’s economy into a recession, roil financial markets and weaken London’s position as the pre-eminent international financial centre.

“To all those who continue to prophesy disaster, I say yes – there will be difficulties though I believe that with energy and application they will be far less serious than some have claimed,” Mr Johnson said, watched by his girlfriend, Carrie Symonds, and his staff.

Some early key appointments to his cabinet include former Home Secretary Sajid Javid – a banker before entering politics – given the key role of chancellor and Priti Patel as the new British Home Secretary.