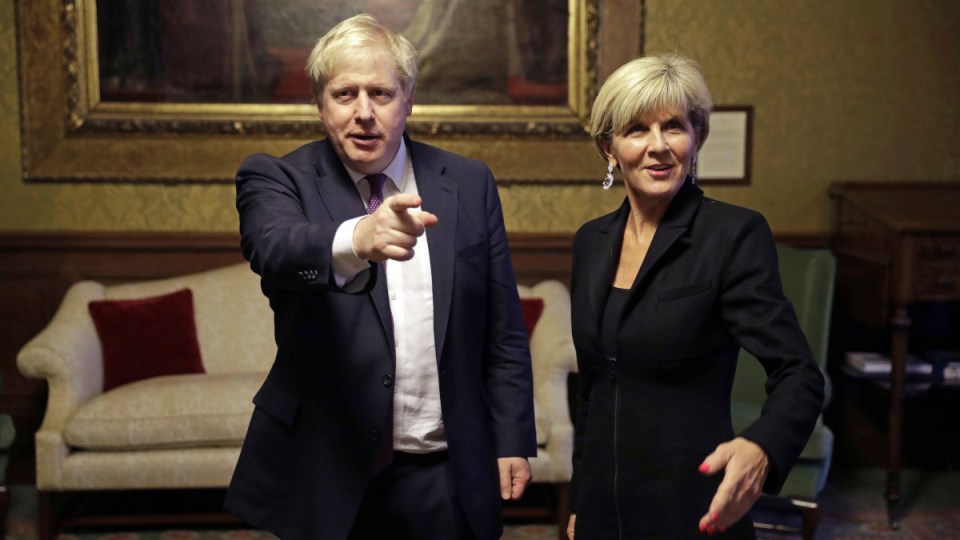 New British PM Boris Johnson has an “unusually close” relationship with Australia, according to former foreign minister Julie Bishop – who expects the bond to become even tighter now he leads the UK.

Mr Johnson was elected as leader of the UK Conservative Party and elevated to prime minister-designate overnight.

“Boris Johnson has an unusually close relationship with Australia for a British prime minister,” Ms Bishop told the Seven Network on Wednesday.

“He was here for the annual Australia-UK ministerial forum. I hosted him in Sydney and he spent several days here reminiscing about the good times he’s had in this country.”

Ms Bishop said the flamboyant British leader knew many Australian politicians and public figures well, and had spoken publicly about his “love and affection” for the country.

“I think we’re very well positioned to have an even stronger relationship with Britain,” she said.

“Of course, post-Brexit there will be enormous opportunities for us to increase our trade relationship with Britain and political and strategic ties more generally.”

Ms Bishop, who worked with Mr Johnson when he was British foreign secretary, said he had a great interest in the Pacific and spoke often about wanting to visit more often.

“It would be a mistake to ever underestimate Boris Johnson,” she said.

Prime Minister Scott Morrison took to Twitter to congratulate Mr Johnson, who will replace Theresa May after winning the Tory leadership.

“I look forward to working with him and catching up at the G7 next month,” Mr Morrison said.

“He has a reputation for getting things done and making things happen. I wish him all the best as he charts the way forward for the UK. We have a great relationship with the UK and it will remain so with Boris.”

“I look forward to continuing our dynamic and enduring partnership with Great Britain,” Ms Payne posted on Twitter.

Ms May will leave office on Wednesday after seeing the Queen at Buckingham Palace.

Meanwhile, her replacement comes to office with a long list of media gaffes that includes taking out a 10-year-old boy during a 2015 rugby exhibition, calling gay men “tank-topped bum boys” and getting stuck on a zip line at the 2012 London Olympic Games.

He is a man with plenty of tales – some of them Australian.

It’s time to get to work to deliver Brexit by 31st October, unite the party, defeat Jeremy Corbyn – and energise our country!

So what is Boris Johnson’s connection to Australia?

During a holiday in the Northern Territory in 2013, Mr Johnson visited a crocodile farm and kissed a baby crocodile named after Prince George.

It’s understood the crocodile came from an egg that was laid on the same day the Duke and Duchess of Cambridge announced they were having a baby.

Before proceeding with a kiss, Mr Johnson asked: “Is this politically advisable? Does everybody have to kiss a croc, is this a standard thing?”

He said the “royal family… should definitely meet George before he gets turned into a handbag”.

IN NO PARTICULAR ORDER: A COLD BLOODED REPTILIAN OVERLORD, AN ANIMAL THAT WOULD EAT ITS YOUNG, AND A SALTWATER CROCODILE. pic.twitter.com/VoQRsuOfkj

But kissing a croc isn’t the prime minister’s only interaction with the great Australian outdoors.

Speaking to The Canberra Times in 2015, Mr Johnson recalled how he “once spent a night sleeping in a roundabout” in Australia’s capital when he was a teenager in the 1980s.

“I was driving there and I was about 18 and I got totally lost and I dossed down for the night in a roundabout – well, I woke up and discovered it was a roundabout,” Mr Johnson said.

He said he pitched his tent on the roundabout in the middle of the night and got bitten by insects.

“It was terrible,” Mr Johnson told the newspaper.

“I thought it would be OK, then I got woken up by the traffic and then I looked at my hands, my hands had swollen up like blown-up washing up gloves because I had been so badly bitten.”

Around the world, Mr Johnson’s antics have provided inspiration for countless memes and jokes – even from North Korea.

If Boris can tackle brexit negotiations like he tackles a 10 year old then I am confident if a good deal. #boris @Conservatives @BorisJohnson @rahu1n https://t.co/m7bVTxnjwu

Britain’s new PM gets the Julie Bishop tick of approval