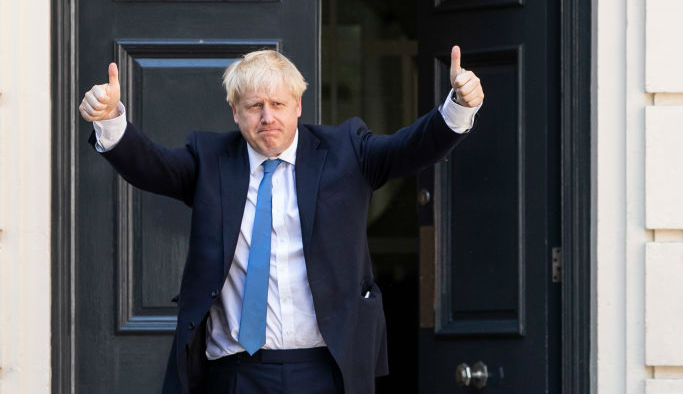 Boris Johnson confirms his leadership win with a thumbs up. Photo: Getty

He’s a flamboyant figure known for his ambition, untidy blond hair and cursory command of policy detail and he has won the ballot to become Britain’s next Prime Minister.

Mr Johnson, variously known as BoJo or Britain’s Trump, will replace Theresa May to officially become the nation’s 77th prime minister on Wednesday.

He easily beat fellow leadership contender and former foreign secretary, Jeremy Hunt, with almost double the votes at 92,153 to 46,656 in the Conservative membership ballot.

Mr Johnson will lead the government at one of the most tumultuous times in Britain’s modern history as it tries to complete its Brexit divorce from the European Union.

“We are going to energise the country,” he said.

“We are going to get Brexit done on 31 October and take advantage of all the opportunities it will bring with a new spirit of can do.

“We are once again going to believe in ourselves, and like some slumbering giant we are going to rise and ping off the guy ropes of self doubt and negativity.”

A former London mayor, he wooed Conservatives by promising to succeed where Ms May failed and lead the UK out of the European Union on the scheduled date of October 31 – with or without a divorce deal.

However his convincing victory is already catapulting the UK towards a showdown with the EU and a constitutional crisis at home, as British MPs have vowed to bring down any government that tries to leave the bloc without a divorce deal.

While his ascendancy received the expected warm congratulations from world leaders, the EU warned of “challenging times ahead” and ruled out renegotiating the terms of Brexit, telling the new British leader that any major change to the divorce terms was off limits.

Ursula von der Leyen, who will take over the powerful European Commission from November, said they had a “duty to deliver something which is good for people in Europe and the United Kingdom”.

Mr Johnston’s leadership may also trigger resignations on his own side of politics, with Education Minister Anne Milton leading the way while several other Conservative ministers have announced they will resign to fight any push for a “no-deal” Brexit.

Ms Milton, who felt the departure from the EU should be “managed”, said her decision to step down was the “right thing to do”.

Chancellor Philip Hammond and Justice Secretary David Gauke have signalled their intention to resign if Mr Johnson became PM, following Alan Duncan, who quit as a Foreign Office minister on Monday in protest at a likely Johnson victory.

“Boris Johnson has won the support of fewer than 100,000 unrepresentative Conservative Party members by promising tax cuts for the richest, presenting himself as the bankers’ friend, and pushing for a damaging no-deal Brexit,” Mr Corbyn tweeted.

He added: “The people of our country should decide who becomes the prime minister in a general election.”

Within half an hour of the news, US President Donald Trump tweeted his congratulations, saying: “He will be great!” and telling a function in Washington “a really good man is going to be the prime minister of the UK now”.

“They call him Britain Trump. That’s a good thing.”

Congratulations to Boris Johnson on becoming the new Prime Minister of the United Kingdom. He will be great!

The two men have recently been complimentary about each other although in 2015, Mr Johnson accused Mr Trump, then a candidate for office, of “stupefying ignorance” that made him unfit to be president.

Australian Prime Minister Scott Morrison also tweeted his congratulations, saying he looked forward to catching up at the G7 next month.

“He has a reputation for getting things done and making things happen. I wish him all the best as he charts the way forward for the UK. We have a great relationship with the UK and it will remain so with Boris,” Mr Morrison tweeted.

Iran’s foreign minister Mohammad Javad Zarif reached out to the new leader, tweeting that Tehran did not seek confrontation with London amid a tense stand-off between the two countries over seized oil tankers in the Persian Gulf.

“I congratulate my former counterpart, @BorisJohnson on becoming UK PM,” Zarif said on Twitter. “Iran does not seek confrontation. But we have 1500 miles of Persian Gulf coastline. These are our waters & we will protect them.”

“The May govt’s seizure of Iranian oil (tanker) at behest of US is piracy, pure & simple,” Zarif added.

Ms May announced her resignation in May and stepped down after Britain’s Parliament repeatedly rejected the withdrawal agreement she struck with the 28-nation EU.

Mr Johnson insists he can get the EU to renegotiate – something the bloc insists it will not do.

If not, he said, Britain must leave the EU on October 31 “come what may”.

Pro and anti-Brexit protests were held outside the PM’s Downing Street residence on Tuesday as Britain awaited the decision.

Mr Johnson will preside over a House of Commons in which most members oppose leaving the EU without a deal, and where the Conservative Party lacks an overall majority.