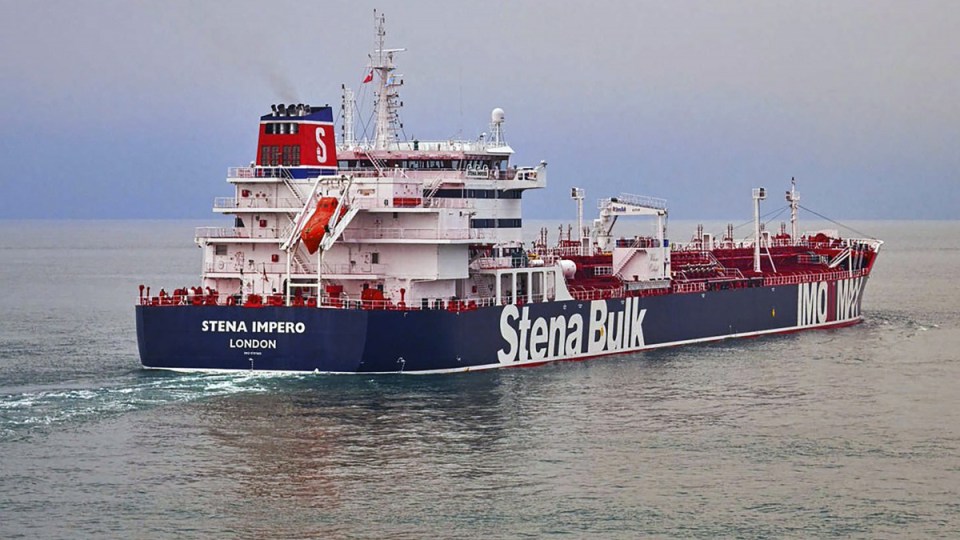 Contact with the British oil tanker Stena Impero and its 23 crew lost after it was reportedly seized by Iran in the Persian Gulf. Photo: AAP

Defiant Iran has upped the ante in the Persian Gulf, claiming to have seized a British oil tanker and its 23 crew.

Defying US warnings against ‘harassing’ vessels, Iran’s state media reports its Revolutionary Guard captured the British Stena Impero in the Strait of Hormuz for “not following international maritime regulations”.

The tanker was taken to a coastal area and turned over to the authorities to take the necessary legal steps, Iran state television said.

The UK government believed a second vessel, the British-operated but Liberian flagged Mesdar, had also been captured but its owners have confirmed the ship is “free to continue the voyage”.

“Communication has been re-established with the vessel and Master confirmed that the armed guards have left and the vessel is free to continue the voyage. All crew are safe and well,” a statement said.

The incidents come amid mounting tensions in the Gulf, with Iran accused of causing trouble in the vital international oil shipping passage as it also ramped up its uranium-enrichment program in retaliation to US sanctions.

It also follows a dispute on Thursday local time between the US and Iran over claims the Americans shot down an Iranian drone that ventured too close to its navy and Iran earlier seizing a yet-to-be identified oil tanker it accused of smuggling.

Also this month Britain seized an Iranian tanker in Gibraltar on suspicion of smuggling oil to Syria.

Britain has responded to the latest incidents, describing Iran’s actions as “unacceptable” and calling for freedom of navigation in the Gulf.

“I’m extremely concerned by the seizure of two vessels by Iranian authorities in the Strait of Hormuz,” Foreign Secretary Jeremy Hunt said.

“I will shortly attend a COBR (national security) meeting to review what we know and what we can do to swiftly secure the release of the two vessels – a British-flagged vessel and a Liberian-flagged vessel.

“These seizures are unacceptable. It is essential that freedom of navigation is maintained and that all ships can move safely and freely in the region,” Mr Hunt said.

The Stena Impero’s owner said they lost contact with the vessel which was on its way to Saudia Arabia before it was intercepted and performed a sharp turn and began tracking towards Iran.

In a statement, Stena Impero’s owner Stena Bulk said the crew was approached by unidentified small crafts and a helicopter at 4pm London time on Friday.

“We are presently unable to contact the vessel which is now heading north towards Iran,” the statement said.

“There are 23 seafarers aboard. There have been no reported injuries and their safety is of primary concern to both owners and managers.

“We are in close contact with UK government authorities.”

A meeting of the UK government’s emergency committee is reportedly taking place to investigate what had happened.

Earlier the US vowed to destroy any Iranian drones flying “too close” to its ships in the Strait of Hormuz after claiming to have shot down a drone.

However Iran dismissed US President Donald Trump’s assertion, saying all its unmanned planes were accounted for.

“If they fly too close to our ships, they’ll continue to be shot down,” a Trump administration official said on Friday, briefing reporters on condition of anonymity.

The US official also dismissed an offer from Iranian Foreign Minister Mohammad Javad Zarif that Iran could immediately ratify a document prescribing more intrusive inspections of its nuclear program if the US abandoned its economic sanctions on Tehran.

Relations between the US and Iran deteriorated last year when Mr Trump abandoned a 2015 international nuclear deal between world powers and Iran.

Under the pact, Iran agreed to restrict nuclear work long seen by the West as a cover for developing atomic bombs in return for lifting sanctions.