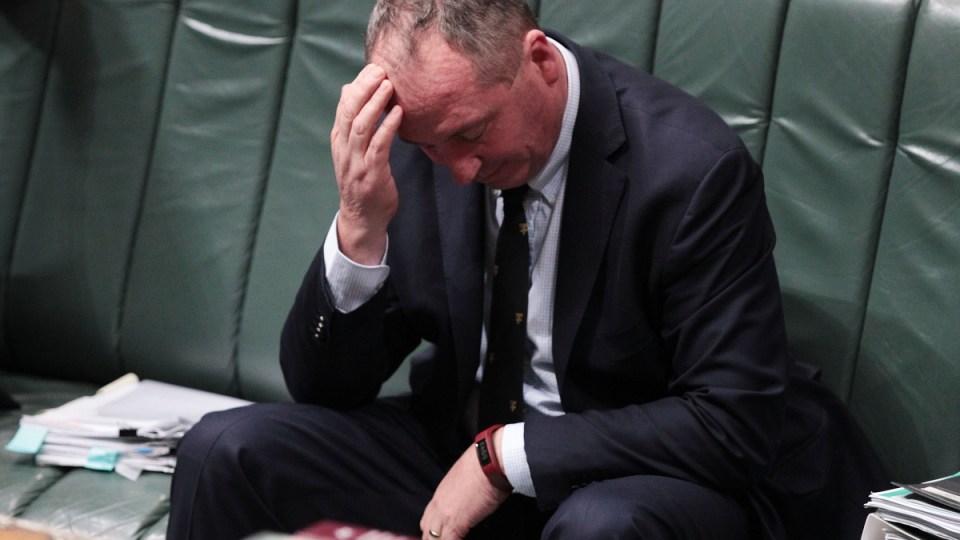 Not praying, thinking. Barnaby Joyce is sharing big ideas, some of them full of kindness for poor people. Photo: Getty
analysis

It seems as if everywhere we look at the moment, Barnaby Joyce is “showing leadership” on a shopping list of controversial issues.

This is just what humble backbenchers do, says Mr Joyce, who’s relying heavily on the right of Coalition MPs who don’t have a ministry to “freelance” on policy matters.

However Mr Joyce’s commentary this week on nuclear energy, raising Newstart, and an Indigenous voice to Parliament is also a transparent re-branding exercise – the type favoured by disgraced politicians when they’re trying to rebuild their leadership credentials.

You might recall that Mr Joyce was doing a lot of leadership posturing in the lead-up to the May federal election. Some political observers even reported that the former Deputy PM’s return to the Nationals leadership was such an inevitability that it could possibly happen even before the election.

However wiser heads prevailed, cautioning that female voters in particular weren’t ready to forgive the man who not only left the family home for his younger, pregnant mistress, but who was also accused of sexually harassing a respected rural businesswoman.

The leadership putsch was put on hold until after the anticipated electoral slaughter, when Mr Joyce was expected to humbly accept the call to pull together the pieces of the shattered Nationals Party.

Unfortunately, for Mr Joyce at least, that opportunity did not eventuate. In addition to the Liberals, the Nationals fared well in Scott Morrison’s miracle election, leaving the rural party’s leader Michael McCormack secure in his position.

Mr McCormack was unanimously re-elected by his colleagues just days after the election win, with Mr Joyce absent from the meeting due to the impending addition of a second child to his new family.

Retained a chair, no luck with a seat

To add insult to injury, the backbencher missed out on a seat in Scott Morrison’s new ministry and also lost his special drought envoy role, although Mr Joyce did retain a gig as chair of a parliamentary committee.

Using what was left available to him, namely the chairman’s role, Mr Joyce kicked off a campaign to become relevant again by claiming his committee should hold an inquiry into establishing nuclear power in Australia.

Yet again demonstrating his expertise in energy policy, the former accountant claimed in a radio interview last weekend that technological advances had essentially made nuclear energy “safe” – and that impoverished Australians living in regional Australia would vie to live near a nuclear power plant if it meant they would receive lower-cost or free electricity in return. To be fair, this is how the French established their nuclear power stations with minimal community dissent.

These reassuring words may well be what investors with uranium interests told Mr Joyce, but the vested interests omitted to explain how expensive it is to build a safe nuclear power station, and how long it takes.

Meanwhile, solar and wind farms with battery storage can be built in remote locations too, but at less cost and in less time, with no need to worry about long-term radioactive waste. Yet pesky details are not what the Barnaby 2.0 campaign is all about.

As he told one radio interviewer last weekend, talking about unpopular or difficult proposals that could benefit his “people” in rural Australia is what “leadership” is all about.

Mr Joyce didn’t explain however why a humble backbencher needs to be demonstrating leadership. The aspiring leader also claimed this week that the Newstart allowance should be raised because unemployed people in rural and regional Australia can’t survive on the paltry amount, with some resorting to selling dope to make ends meet.

Then there’s Mr Joyce’s ‘leadership’ idea to turn the Senate into the House of Representatives to get more rural and regional people into Parliament.

At the moment, each state or territory elects all its senators, but Mr Joyce wants each state divided into six regions with two senators each, making the senate look a lot more like the House of Representatives, which also has regions (called electorates) that elect one MP each.

To strengthen the credentials for his suggestion, Mr Joyce conscripted Indigenous brothers and sisters to claim that his remodelled senate would lead to more First Nations people being elected.

However this potential over-reach took the MP in a direction he clearly didn’t expect, leading to a challenge during an interview this week about his newfound interest in increasing Indigenous voices in Parliament.

Reminded that he had forcefully misrepresented the call for a constitutionally-enshrined Indigenous voice to parliament as a third chamber, Mr Joyce swiftly apologised for his previous remarks when still deputy PM.

Conservative voters in rural and regional Australia would have lapped up his Sky News-friendly talking points on nuclear power and Newstart, but they will have baulked at his backdown on the “third chamber”, which is the latest topic of outrage on the reactionary network.

This has resulted in an important leadership lesson for Mr Joyce. Trying to be all things to all people may have ruined the leadership merit points he worked so hard to earn this week.