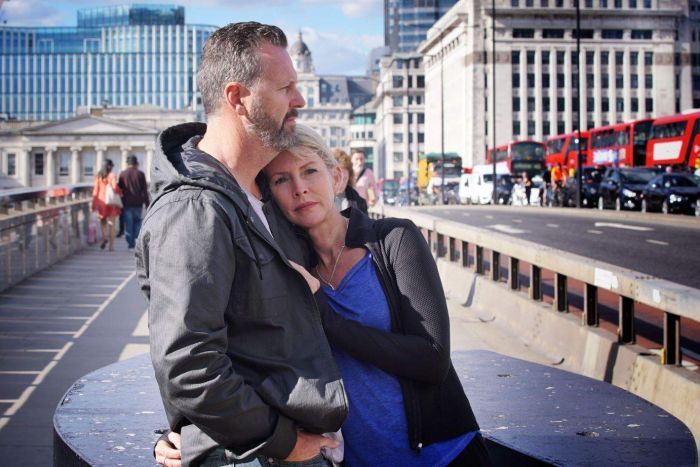 Mark and Julie Wallace visited the area in London where their daughter Sara Zelenak was killed in a terrorist attack. Photo: ABC

The parents of a Brisbane woman murdered in a London terrorist attack have called on UK police to charge the attackers’ family members if they knew about their extremist views but did not report it to authorities.

Sara Zelenak, 21, was one of eight people murdered on June 3, 2017, when three attackers — Khuram Butt, Rachid Redouane and Youssef Zaghba — ploughed down pedestrians in a rented van before embarking on a knife attack at Borough Market.

The rampage lasted 10 minutes, during which time the three men killed eight people and injured 48 others before being shot and killed by specialist police.

Ms Zelenak’s mother and stepfather, Julie and Mark Wallace, have recently returned from the UK, where they attended inquests into the attacks.

The inquests, which were held over two months, found authorities lawfully shot the three attackers and cleared MI5 and police of failing to prevent the attack despite having the ringleader under investigation.

They also determined “the extremist views and conduct of one attacker were known to a number of his close family members in the months and years before the attack” and that these were not reported to authorities.

“The fact those around the attacker knew of the potential dangers and the [ringleader of the attack] was on the watchlist but not watched at that time, for Julie and I, we are quite distraught that potentially it could have been stopped,” Mr Wallace said.

Mr Wallace said some of their questions were not answered by the proceedings, including whether the attackers’ families will be charged.

“I don’t understand the law in the UK, I would like to know whether the families of the perpetrators who have been identified as knowing that they were a potential risk and had plans, will be charged,” he said.

“They should definitely be charged.

“I think that anyone who is planning extremist attacks should be charged, if they know of an attack and don’t report it they are an accomplice,” he said.

“If you have knowledge of the attack you should face the full brunt of the law.”

He said both he and his wife understood public safety and terror prevention were complex issues but believed authorities could have done more to prevent the attack.

He said inquests into the crime haven’t provided them with any real closure and show a “daunting” lack of resources available to monitor terror watchlists at the time of their daughter’s death.

“Preventative measures in an attack like this would be very difficult,” Mr Wallace said.

“It is more about how authorities manage their watchlists and potential attackers, the system needs more resources.

“I understand the resources are limited, there [are] something like 20,000 potential attackers on the list and [authorities] can only watch less than 2,000.”

Mr Wallace said the inquests — which examined the eight victims’ deaths as well as the personal history and background of the three attackers and their preparations — forced them to relive the trauma of losing Sara.

“There were some things that gave us comfort but for us it was more about reliving the event and feeling all those raw emotions again,” Mr Wallace said.

“We spent the first two weeks at the inquest that dealt with Sara, then we chose certain days we wanted to be there because it does take a lot out of you.

“We saw all the video footage, CCTV, so we could see Sara on the town being happy and it is shocking to think that a person goes out for a dinner and never comes home, it’s very traumatic.

“It’s difficult to hear all those things.”

Mr Wallace is in Cairns to raise funds for the grief-support charity Sarz Sanctuary, established following the 21-year-old’s death.

“There will be 14 jet skis that leave Australian waters from Weipa to Papua New Guinea and then return down the east coast and finish at Port Douglas 14 days later,” he said.

“Julie and I really understand that traumatic grief really grabs you and it’s really difficult to work through that.

“We want to give back to people because it helps us personally but it helps people to get back on their feet and to find peace.”