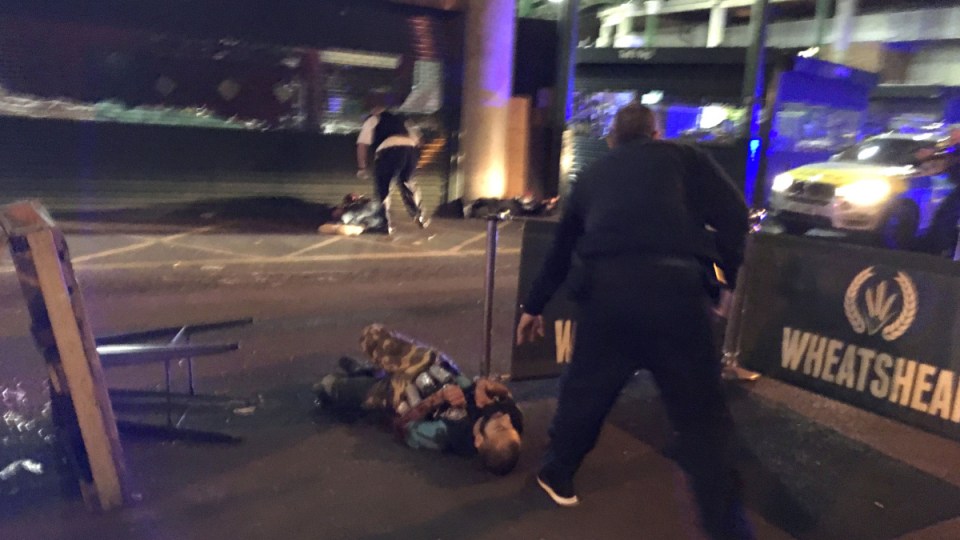 One of the attackers is tackled by a police officer. Photo: Getty

Three men who killed eight people, including two Australians, in the London Bridge and Borough Market terror attack of 2017 were lawfully killed by police after ignoring clear warning shouts, an inquest has found.

The decision comes after two months of harrowing testimony at the Old Bailey in London from witnesses, family members of the victims and law enforcement officials.

On the night of June 3, 2017, the three attackers – Khuram Butt, Rachid Redouane and Youssef Zaghba – ploughed down pedestrians in a rented van before embarking on a knife attack at Borough Market.

The rampage lasted 10 minutes, during which time the three men killed eight people and injured 48 others before being shot and killed by specialist firearm police.

Among those killed were two Australians – 21-year-old Sara Zelenak and 28-year-old Kirsty Boden – a nurse who was killed as she tried to save another victim in the attack.

Newly released amateur video shows unarmed London police and the public coming face to face with the attackers moments before they were shot and killed.

“Straight away, I see that he has a vest, or suicide belt,” PC Bartzos Tchorzweski told the BBC.

“You just have no tools to fight with that kind of danger, so we made a decision to withdraw.”

Screams of “run” are heard on the video and show police officers retreating as they call for back-up from armed officers.

“I guess we are police officers, so we have to do something,” Mr Tchorzweski said.

Two bakers are also seen in the video, armed with a plastic crate and broom, ready to confront the attackers.

Soon after, armed police arrived and fired dozens of shots, killing the terrorists.

Police feared the men may have tried to detonate the suicide vests they were wearing.

However, the vests later turned out to have been fake.

Following the inquest’s decision, Police Commissioner Cressida Dick credited the “extraordinary” bravery of the first responders and the public.

“I want to pay tribute to the tremendous courage and professionalism they showed that night,” she said.

“Faced with an appalling and confused scene they acted calmly, quickly, decisively and in accordance with their training.

“Without their extraordinary efforts so many more people would have been injured or have died.”

In an earlier inquest, focused on the victims of the attack, six families had asked the coroner to criticise the actions of police and security services, by concluding the attack could have been prevented if the planning by the terrorists had been better detected.

The ringleader, Khuram Butt, had previously been under investigation prior to the attack. In 2015 he was identified as a person who could attack the United Kingdom.

But Chief Coroner Mark Lucraft QC said he was “not persuaded” there had been a missed opportunity by MI5.

Mr Lucraft did previously criticise the lack of barriers on London Bridge in the wake of the Westminster Bridge attack three months earlier.

Police recognised the ‘shift in threat’

However, Commissioner Dick said she believed the heightened threat of terrorist attacks during that time helped the preparedness and the response by emergency services during the attack.

“The Paris attacks in November 2015 was a particular watershed moment. We, the police, and our partners, recognised this shift in threat,” she said.

“It was because of this that we had more armed police available across London on the night of June 3, 2017. They were ready and able to respond to the attack.”

“It was because of this that many, many people ran and hid from the danger; that staff in local restaurants and bars took immediate action to get their customers to safety and prevented the attackers from being able to kill or injure many more people than they did.”