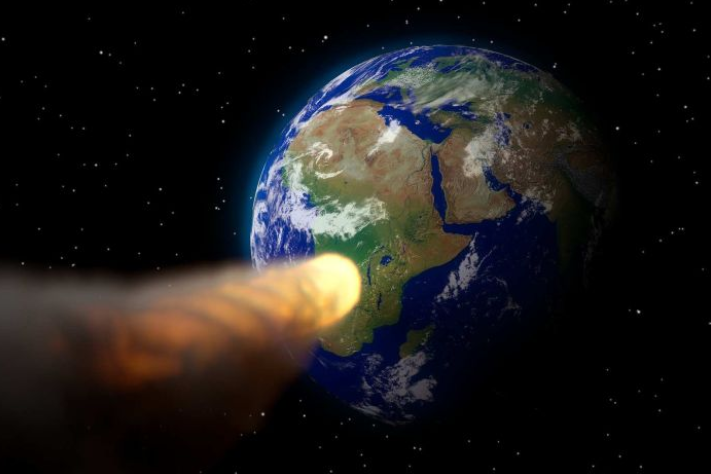 Destination Earth: The plant we share has been hit before and will be struck again -- possibly prompting mass extinctions and life as we know it. Photo: ABC

Dotted along Sydney’s coastal cliffs are derelict, sealed World War II bunkers. Nick Sais believes they’re the kind of resource more Australians should learn about before the next disaster strikes.

“A lot of people just drive past without realising what is at their fingertips if they ever needed to use it,” Mr Sais says.

“They’re huge, they’re absolutely enormous,” he says, pointing to structures that look like hills, some hundred metres across.

Mr Sais runs the group Australian Preppers. While he is preparing for a range of natural or human-made catastrophes, he believes asteroids pose the greatest threat.

It’s not just ‘preppers’ or survivalists who think we should be better prepared for the next catastrophe. In recent years, several new research organisations have sprung up to study what’s known as ‘existential risk’ — the risk to humanity, or life on Earth.

Many of them have released reports describing the likelihood and impact of major disasters, including giant asteroid impacts.

How deadly can asteroids be?

Many asteroids have slammed into Earth with dramatic impacts, including the rock that wiped out many species of dinosaurs about 65 million years ago.

It’s believed that asteroid that created the 150-kilometre-wide Chicxulub Crater off the coast of Mexico would have been around 10 to 15km in diameter.

Australia also bears the scars of asteroid impacts, some of which are larger than the Australian Capital Territory, says astrophysicist Brad Tucker, who works at the ANU’s Mt Stromlo Observatory.

Dr Tucker says an asteroid large enough to create a crater like that would be catastrophic, and not just in the immediate area around where it strikes.

When an asteroid hits the Earth’s atmosphere it explodes, releasing a huge amount of energy. A global monitoring agency for nuclear weapons has detected 26 asteroid explosions with more power than a nuclear bomb in the 13 years between 2000 and 2013.

One of these was the Chelyabinsk meteor that exploded over rural Russia in 2013. It was only 20 metres across, but when it exploded roughly 20km above ground, it briefly shone brighter than the Sun.

It shattered glass, knocked people off their feet, damaged thousands of buildings, and caused more than 1,000 people to seek medical attention.

If an asteroid is larger than that 20m boulder, and actually hits the ground, the consequences can be even more dramatic.

“This layer of dust will block out the sunlight for a very prolonged period of time.

“Vegetation starts to die. The things reliant on vegetation fade away.

“It’s not like the dinosaurs all disappeared in a single instant, it’s a prolonged period of global climate change, something we cannot imagine, that transformed the shape of the Earth quite literally.”

Blind in the southern skies?

NASA’s Near-Earth Object Observations program uses a worldwide network to find and track asteroids and comets. But in 2013, their only asteroid tracking observatory in the southern hemisphere — Siding Spring Observatory in New South Wales — was defunded.

Dr Tucker says this decision has left a gap in our tracking network roughly the size of the entire southern hemisphere.

In the same way we can only spot the Southern Cross in the southern hemisphere, Dr Tucker says we may only be able to spot some asteroids from below the equator.

Lindley Johnson, NASA’s planetary defence officer (yes, that is a real job), agrees the loss of Siding Springs left a gap in the ground-based network. But, he says, we aren’t blind to objects hurtling towards us from the southern hemisphere.

“That is true if your surveys are only done from the ground.”

NASA also uses a space-based telescope called NEOWISE that can track asteroids coming from any part of space, he says.

The NEOWISE satellite has detected about 33,000 near-Earth objects in the past five years.

Mr Johnson also points out that his team has now found 90 per cent of the asteroids 1km across or larger, that come close to Earth.

“The population of those was estimated to be around a thousand,” Mr Johnson says. “We now have almost 900 are in our database.

“We still find one or two a year, and in fact we are working an object right now that we believe is a kilometre that’s just been discovered.”

That said, there are still plenty of smaller asteroids to find.

Mr Johnson has previously described asteroids between 400 and 500 metres across hitting the Earth as “climate change in an afternoon”.

But, he admits, it will take until sometime in the 2050s to find all these objects. To help find the rest, there are also new ground-based tracking stations currently being built in South America and Australia.

“Both a Space Surveillance Telescope that’s going into Western Australia here, and then the Large Synoptic Survey Telescope that is being built in Chile is scheduled to go in operation to 2023,” says Mr Johnson.

Until then, Dr Tucker says we’re relying heavily on unpaid amateurs to help track asteroids in the southern hemisphere. “That is literally the current state of affairs,” he says.

One of those amateurs is John Broughton, who has an impressive track record in astronomy: he’s spotted hundreds of near-Earth objects flying around our planet, including two comets.

He’s so prolific that he has his own Wikipedia page.

Mr Broughton works from his home on the Gold Coast, using a telescope he designed and built himself. His home is now recognised internationally as the “Reedy Creek Observatory”.

“I started actively looking for asteroids in 1997, and I found six new asteroids pretty soon after that,” he says.

Then, in 2004, he noticed something strange on his telescope.

“[The object] was moving perhaps 50 per cent faster than a regular asteroid,” Mr Broughton recalls. “I wasn’t experienced enough at that time to know that that was indicative that it was a near-Earth object.”

This particular chunk of rock was over one kilometre across, and because it was coming close to Earth’s orbit, it was classified as a potentially hazardous asteroid, or PHA.

This is almost exactly how the 1998 film Deep Impact begins — a young Elijah Wood spots an unusual object using his backyard telescope, and a lone astronomer confirms it’s a giant asteroid headed towards Earth. In the film, the astronomer dies in a fiery car crash before he can inform the authorities.

But luckily, in Mr Broughton’s case, he was able to inform the Minor Planet Centre, which catalogues all known near-Earth objects. Other telescopes around the world were immediately trained on the PHA, to better estimate where it was headed.

While he was pretty “blown away” by the discovery, thankfully we all weren’t. Follow-up observations confirmed it wasn’t going to hit Earth.

But even if we could detect an asteroid coming our way, could we do anything about it?

The plan to divert an asteroid

In the 1998 asteroid disaster movie Armageddon, Bruce Willis’ character Harry Stamper is tasked with cracking an asteroid in half with nuclear weapons. In the real world, it’s our NASA planetary defence officer Mr Johnson’s job to figure out the best way to stop an asteroid hitting Earth.

“I like to tell people that I’m the real Bruce Willis, but they kind of laugh at me,” says Mr Johnson, who is confident it’s now possible to avert an asteroid strike — albeit not in a Hollywood kind of way. “This is one major natural disaster that we can prevent,” Mr Johnson says.

The plan is to fire a satellite at a small asteroid that’s currently in orbit around a larger asteroid.

“It’s just a very simple thing of transferring the momentum of that spacecraft and its velocity to the target,” Mr Johnson says.

Even a small impact, from a small satellite, can push an object in space off course, or move it out of its existing orbit. If the DART mission is successful, this may provide a blueprint to divert a larger asteroid headed towards Earth in the future.

NASA also have some other plans they’d like to test, including flying a satellite in orbit around an asteroid, to slowly tug it in one direction.

Explosions aren’t completely off the list either; Mr Johnson says “ablation” might also work to push an asteroid off course. In this instance, a laser or small explosion could launch a jet of rocky material off one side of an asteroid, pushing it off course.

“That creates a subtle jet thrust that again changes the velocity of the asteroid a subtle amount, but enough,” says Mr Johnson, who says Earth getting walloped is a matter of when, not if.

“Do I think we’re going to see an extinction level event in our lifetime? No I don’t,” Dr Tucker says. “Do I think we will see another Chelyabinsk one happen, and people will see it and feel the effects of it? Most definitely.”

But while an asteroid strike could do a lot of damage, it may not be the greatest threat to humanity. Human nature may be our worst enemy, says Mr Johnson.

“I think our biggest risk is forgetting that we are all one human species,” he says. “Currently this is the only place we know of in the universe — Earth — where we are able to live right now.”

Dr Tucker says the problem is that we appear to ignore processes on Earth and in space that happen over long timescales.

“It’s the same treatment of the problem of both climate change and ‘space stuff’.

“It’s always kind of this laissez-faire type, ‘it’s going to happen in the future, we’ll worry about it later’, but that’s not the way to solve it.”

Back in Sydney, Mr Sais is planning ahead.

“No one can say [a disaster] can’t happen here,” he says.

It’ll come from outer space – and could wipe out humanity