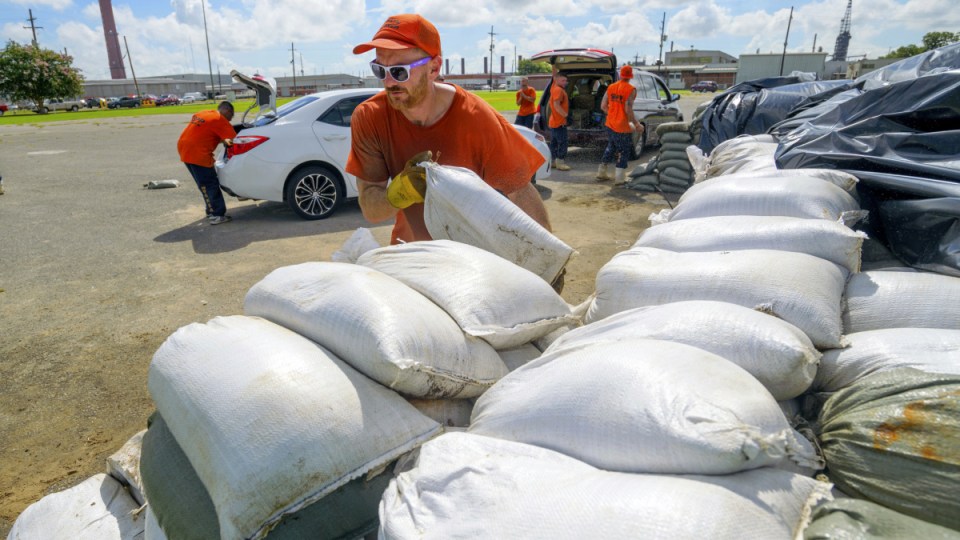 Sandbagging is underway in the US state of Louisiana as Tropical Storm Barry nears landfall. Photo: AAP

Tropical Storm Barry could cause “life-threatening” flood levels as it nears landfall in the US, dumping torrential rainfall on top of already swollen rivers.

The slow-moving storm is bringing extreme rain as it gathers speed towards the state of Louisiana where rivers are already at flood levels.

We’re keeping a close eye on Tropical Storm #Barry this afternoon. Life threatening storm surge and flooding rains will be the main concerns with this system. ⁣

Find and follow your local NWS office here, for the latest on how Barry may impact you: https://t.co/GWrG0hTRHN pic.twitter.com/umRD9P4ONR

President Donald Trump has declared a state of emergency in Louisiana as Tropical Storm Barry moves at a speed of about 8km/hr towards the coast.

Barry will likely strengthen into a hurricane, the National Hurricane Center said, with winds of at least 119km, by the time it reaches the central Louisiana coast on Saturday local time.

It was forecast to bring a coastal storm surge into the mouth of the Mississippi River that winds through the heart of New Orleans, pushing its crest to 5.79m on Saturday local time.

That would be the highest since 1950 and dangerously close to the top of the city’s levees.

Officials from the US Army Corps of Engineers, which maintains the levees, insisted that no significant breaching of the 6m-tall levees in New Orleans was likely.

“There is no system in the world that can handle that amount of rainfall in such a short period,” Ms Cantrell said on Twitter.

The tempest does not yet have hurricane-force winds but it is forecast to bring torrential rains of up to 64 cm in certain places, which officials say risks flooding along the already-swollen lower Mississippi River.

“Major to … record flooding will be possible.”

New Orleans city residents have been warned to stock up on supplies and prepare to shelter in their homes as the storm gathered speed and intensified towards a hurricane.

Some nearby areas were evacuated but the New Orleans mayor said no evacuations were ordered from the low-lying city which strengthened its flood defences after devastating Hurricane Katrina in 2005.

Officials cancelled a Sunday night concert by the Rolling Stones.

The region’s oil production was cut in half as energy companies evacuated offshore drilling facilities.

New Orleans is already saturated after torrential rains flooded streets on Wednesday with local resident Robert Harris, 61, describing it has “the worst week since Katrina”.

Memories of that storm, which flooded much of the city in 2005 and killed 1800 people, are deeply embedded in New Orleans.

The brunt of Barry is expected to skirt the western edge of New Orleans, avoiding a direct hit.

New Orleans residents who plan to ride out the storm flocked to supermarkets for bottled water, ice, snacks and beer, thronging grocery stores in such numbers that some ran out of shopping carts.

Throughout the city, motorists left cars parked on the raised median strips of roadways hoping the extra elevation would protect them from flood damage.

Disease concern for survivors of Afghanistan earthquake
Steve Smith confirmed as starter for first Test against Sri Lanka
Deadly Norway shooting treated as Islamist terrorism: Police
Matildas will be keen to forget 7-0 drubbing by Spain
Upcoming stats will reveal where and how hard rates are hitting economy
Victorian MPs pocket a tidy 2.75 per cent pay raise
Hurricane Barry bears down on The Big Easy
Today's Stories