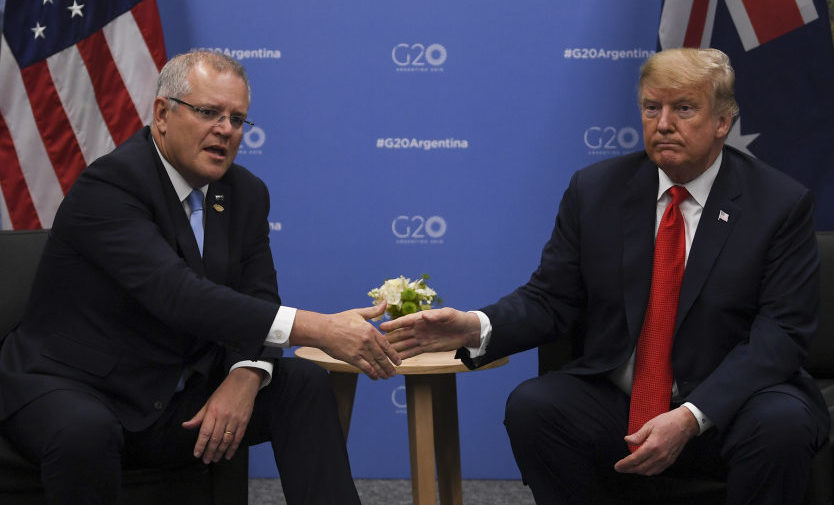 Prime Minister Scott Morrison will be the first Australian leader in 13 years to be hosted at the White House for an official state dinner.

The prime minister’s office has confirmed Mr Trump will play host at a state dinner at the White House for Mr Morrison, following on from their cordial if stilted meetings on the sidelines of the D-Day commemorations in the UK and the G20 summit earlier this year.

It is the first such invitation to an Australian prime minister since President George W Bush hosted John Howard in 2006.

The announcement comes a day after Mr Morrison addressed US military personnel as part of the Talisman Sabre exercises in Queensland involving Australia, New Zealand, the United States, UK, Canada and Japan.

What will they talk about?

Paul Strangio, an associate professor of politics at Monash University, said it was difficult to speculate what topics might be discussed with Mr Morrison at the White House given Mr Trump’s “unpredictability”.

“With Trump, it’s always difficult to know if there is serious policy intent or if he’s struck up some sort of particular bent toward Scott Morrison,” Professor Strangio told The New Daily.

He said a “delicate” subject would be the tension between the US and China.

“The US might be our established ally but China is our key trading partner so any positioning vis-a-vis the Trump administration has to take that into account,” Professor Strangio said.

“Beijing will be watching these developments with interest.”

The political analyst said it was also important to note that 2020 was a presidential election year.

“There is no guarantee Trump will be re-elected, so that’s another thing that we need to keep in mind in terms of aligning ourselves too closely to him,” he said.

Awkward moments with the Trump administration

Australia’s former foreign secretary Julie Bishop recently revealed her partner, David Panton, was mistakenly assumed to be the foreign minister by US First Lady Melania Trump at a 2017 diplomatic meeting in New York.

“All the kings and queens and monarchs and heads of state and prime ministers and foreign ministers are in New York for that one week,” Ms Bishop told an audience at the Adelaide Festival in March.

“Melania, standing by, assumed David was the foreign minister and she said to me: ‘Julie, will you be coming to my ladies lunch tomorrow?’

“And I said ‘No, David’s going to the partners lunch’. She thought about that for a while, thinking: ‘Why would Australia’s foreign minister come to the partner’s lunch?’

“So this went on for a while until the President explained that I was the foreign minister… this isn’t fine.”

In 2017, Mr Trump was made to explain his testy phone call with Malcolm Turnbull shortly after meeting the former prime minister face-to-face for the first time in New York.
Seated alongside Mr Turnbull, Mr Trump dismissed any tensions when asked by the media about ‘that phone call’ in which he slammed Mr Turnbull’s proposal to send 1250 asylum seekers to the US as a “stupid deal”.
“You guys exaggerated that call, that was a big exaggeration,” Mr Trump told the packed media conference.

“We get along great. That was a little bit of fake news.”

“We get along great. Always do,” Mr Trump said.

If things are similarly awkward with Mr Morrison, our PM could always turn to prayer.