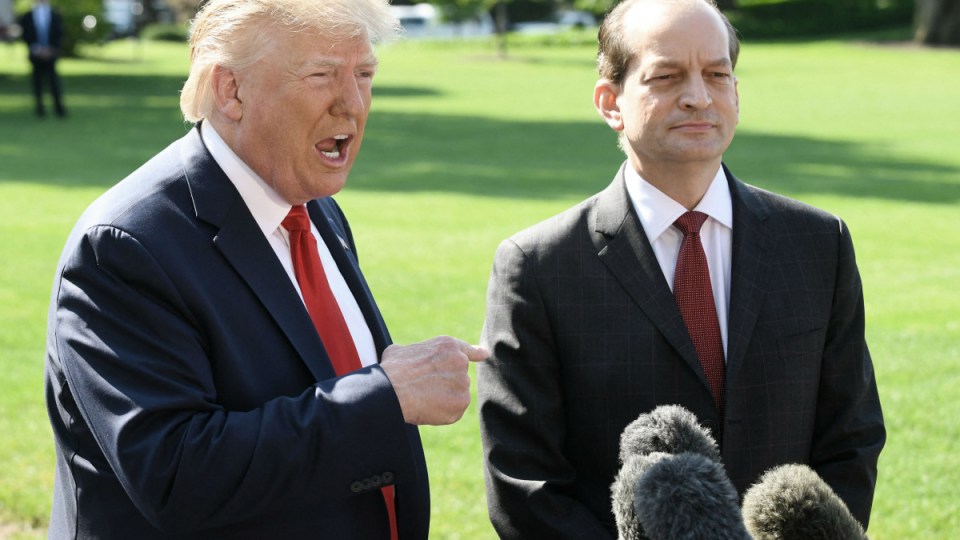 US president Donald Trump joins Alexander Acosta to announce the Labor Secretary's resignation for his handling of the Epstein sex abuse case 10 years ago. Photo: AAP

The Jeffrey Epstein sex abuse case has claimed a scalp in the Trump administration with the resignation of US Labor Secretary Alexander Acosta.

The cabinet member stood down amid fresh scrutiny of his handling of allegations against the billionaire financier more than a decade ago.

Mr Acosta, joined by Mr Trump, told media he did not want to be a distraction to the administration’s work because of his role in Epstein’s first case which critics said had offered a lenient punishment.

“As I look forward, I do not think it is right and fair for this administration’s Labor Department to have Epstein as a focus rather than the incredible economy we have today,” Mr Acosta said.

US prosecutors in New York on Monday accused Epstein, 66, of sex trafficking, luring dozens of girls, some as young as 14, to his luxury homes and coercing them into sex acts.

Mr Epstein, a billionaire hedge fund manager, has pleaded not guilty to the new federal charges.

He had a social circle that over the years has included Mr Trump, former president Bill Clinton and Britain’s Prince Andrew.

Mr Trump, who has fired numerous cabinet and other administration officials as president, said it was Mr Acosta’s idea to step down.

“Alex called me this morning and wanted to see me,” Mr Trump told reporters. “I just want to let you know this is him, not me.”

Mr Acosta was the US attorney for the Southern District of Florida from 2005 to 2009 when he handled Epstein’s first case involving sex with girls, which resulted in a punishment that critics say was far too lenient.

“Mr Acosta now joins the sprawling parade of President Trump’s chosen advisers who have left the administration under clouds of scandal and corruption, leaving rudderless and discouraged agencies in their wake. Taxpayers deserve better,” Democratic US Senator Sheldon Whitehouse said in a statement.

On Wednesday, Mr Acosta held a news conference to defend his handling of the deal, which allowed Epstein to plead guilty to a state charge and not face federal prosecution, saying the sentence would have been lighter if not for the deal.

Democratic US Representative Elijah Cummings, chair of the House Oversight and Reform Committee who has called on Acosta to testify on the Epstein matter, said in a statement:

“Secretary Acosta’s role in approving the extremely favourable deal for Jeffrey Epstein raises significant concerns about his failure to respect the rights of the victims, many of whom were children when they were assaulted.”

The federal prosecutors in New York said they were not bound by the deal arranged by Mr Acosta, which allowed Epstein to plead to a lesser offence and serve 13 months in jail with leave during the day while registering as a sex offender.

In February, a federal judge in West Palm Beach, Florida, ruled that the 2007 agreement violated the victims’ rights. Epstein’s case and Mr Acosta’s role in the plea deal had come under scrutiny earlier this year after an investigation by the Miami Herald.

The Epstein case came up during Acosta’s Senate confirmation hearing but the Republican-majority Senate approved him in a 60-38 vote.