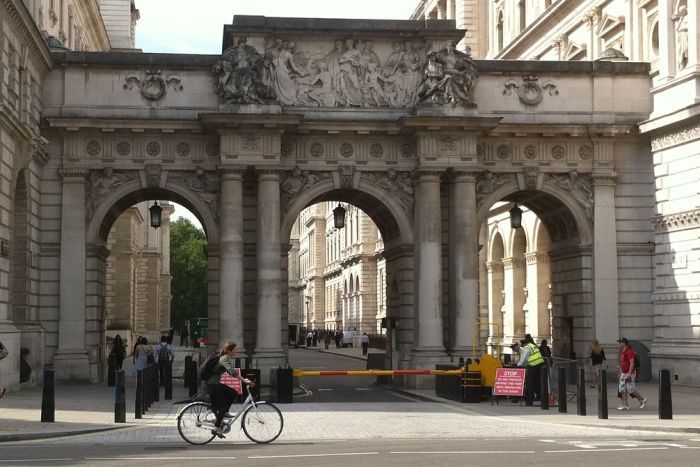 But the fallout could be more wide-ranging, with police asked to join the investigation into who gave the documents to UK newspaper the Mail on Sunday.

Political tensions in the UK are already at breaking point as the country navigates Brexit and seeks a new Prime Minister to replace Theresa May.

While all sides were quick to condemn the leak, the search for who may be responsible for it and their political leanings and motivations will put everyone under scrutiny.

On Tuesday, Conservative MP Tom Tugendhat, chair of the foreign affairs committee, told the Commons he had sent a letter to the Metropolitan Police requesting it to open a criminal investigation.

The Cabinet Office is leading the cross-government investigation into the leak, and on Thursday Downing Street confirmed “initial discussions” have been held with police over the probe.

While many have their suspicions, in some circles the finger-pointing has already begun.

What was leaked and who leaked it?

Emails and diplomatic telegrams (DipTels) going back to 2017 were given to the Mail on Sunday.

DipTels are encoded before they are sent and decoded when they get to the Foreign Office in London, retired British diplomat Sir Ivor Roberts told the ABC.

“An ambassador sends an assessment, a report, an analysis of what’s going on in their home country as long as they think it’ll be useful to be read,” he said.

“When I was ambassador to Yugoslavia during the Bosnian war it was on a daily basis – there was so much happening and so much interest back in London as to what was happening.

“And that will be the view also in Washington, I think the ambassador there will be providing very regular updates.”

He believes those with access to Sir Kim’s memos would be limited.

“The distribution can vary between a very narrow distribution, it depends on what you put on your telegram,” he said.

“You can say ‘personal for’ and then list a handful of people, or you can just put it to the general distribution and say address it to the Foreign Office generally and it will have a very big distribution, maybe hundreds.”

But the fact that the leaked memos span a nearly three-year period will narrow down the field of suspects.

“If it was one document it would be virtually impossible, but the same person dealing with the same subject who’d have access to all of these will be relatively small,” Sir Ivor said.

Bronwen Maddox, director of the Institute For Government, agreed with Sir Ivor’s assessment that the timeframe will aid the search for the responsible party.

“It seems as if there’s two different sorts of cables — ones that would have had quite a wide circulation, but others that are very recent, in the past few weeks, that would only have had a circulation of five to 10 people,” she told the ABC.

“So I think the mood for the officials looking at this is that because some of them were very recent, they’re tipping away from thinking it’s a former disgruntled official and more like someone with current access.”

There is speculation Sir Kim Darroch’s ties with Brussels and the European Union led to the leaking of his memos and ultimately his downfall as ambassador.

Prior to his role as the US ambassador he was Britain’s permanent representative to the EU, and some Conservative politicians believed his pro-Europe stance hindered his performance as a civil servant.

“He has an unbelievably strong commitment to us staying in the EU and that is worrying.

“Many figures in the civil service have had a very tough problem in promoting British interests because they are so embedded in the idea that we should be in the EU.”

Brexiteer and former foreign secretary Boris Johnson is the frontrunner to replace Theresa May as leader of the Conservative Party in just under two weeks, and some say clearing Sir Kim from his role will allow an ambassador with a pro-Brexit stance to be installed in Washington.

Many people would like to see @Nigel_Farage represent Great Britain as their Ambassador to the United States. He would do a great job!

Nigel Farage, leader of the Brexit Party and a man Mr Trump suggested would do a “great job” as ambassador to the US, was quick to jump on the leak to the Mail on Sunday and said Sir Kim was “totally unsuitable for the job”.

Kim Darroch is totally unsuitable for the job and the sooner he is gone the better. https://t.co/ESiefO3UYm

The Mail on Sunday journalist who received the leaks, Isabel Oakeshott, has close ties to Mr Farage and other prominent Brexiteers, even penning a book about them.

But she was quick to hose down the supposed plot against Sir Kim.

“Like I’ve said, sometimes a great story is just that; not some kind of global conspiracy,” she tweeted.

This is ludicrous. Like I've said, sometimes a great story is just that; not some kind of global conspiracy. MASSIVE eye roll. https://t.co/jUrfdQblSM

But Sir Ivor Roberts believes the Brexit narrative is not far from the truth.

“If anyone asked me to speculate I would say I would have thought it would be a Brexiteer minister in another government department who is operating on the basis that Kim Darroch is part of the Foreign Office, the diplomats of whom are still unreconciled to Brexit and are really unreconstructed Remainers, and not particularly sympathetic to Donald Trump,” he said.

“It all matters, because this type of government has to happen confidentially,” she said.

“MPs obviously are partisan but we still think that they are prepared to respect convention, and what you’ve seen in Brexit is people caring so much about their version of the future that they sort of butt through convention.

“I hope this isn’t an example of it, but it feels like it.’

Sir Kim Darroch’s cable leaks about Donald Trump’s White House: Who or what was behind it?