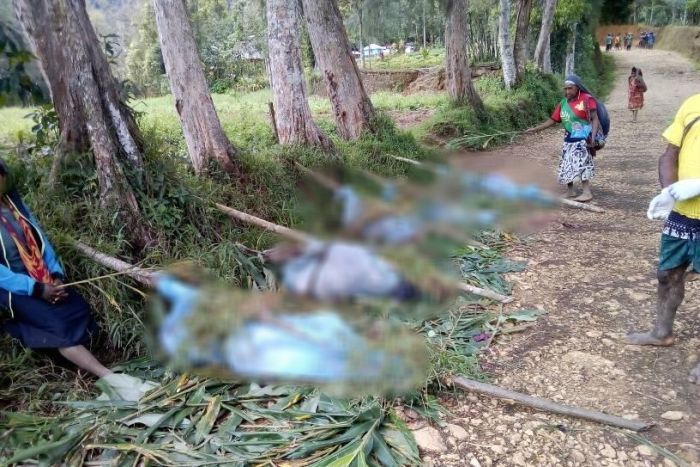 Two pregnant women were among the victims. Photo: ABC/Facebook

At least 16 women and children have been killed in a tribal massacre in Papua New Guinea.

Hela Governor Philip Undialu said the killing took place on Monday in the village of Karida in the Highlands region.

He said while the motive behind the killings was not known, he believed it could be in retaliation for an earlier incident.

But he told ABC’s The World that this was a rare outbreak of tribal violence in the region.

“We’ve never heard of tribal fights happening in this area, it was a spillover of fighting happening in another area, that no one expected,” Mr Undialu said.

The Governor has expressed his condolences, saying he knew several of the victims personally.

Philip Pimua, a worker from the Department of Health who visited the scene, told the ABC he believed eight of those killed were aged between one and 15, and that two of the women were pregnant.

Police spokesman Dominic Kakas said police were unable to confirm the massacre as they were waiting on information from the local commander. He said police would have further information on Thursday.

Brutal tribal violence is a common and ongoing occurrence in Papua New Guinea’s Highlands and officials have long been trying to tackle it, citing its effect on the nation’s development.

‘Today is one of the saddest day of my life’

Overnight, Prime Minister James Marape warned those “killing others” that “I am coming for you”.

“Today is one of the saddest day of my life,” he wrote on Facebook.

“Many children and mothers innocently murdered in Munima and Karida villages of my electorate by Haguai, Liwi and Okiru gunmen.”

He said he had made repeated unsupported requests for “more permanent police” to monitor the area.

“How can a province of 400,000 people function with policing law and order with under 60 policemen, and occasional operational military and police that does no more than band aid maintenance,” Mr Marape said.

“To all who have guns and kill and hide behind the mask of community … I am not afraid to use strongest measures in law on you.”