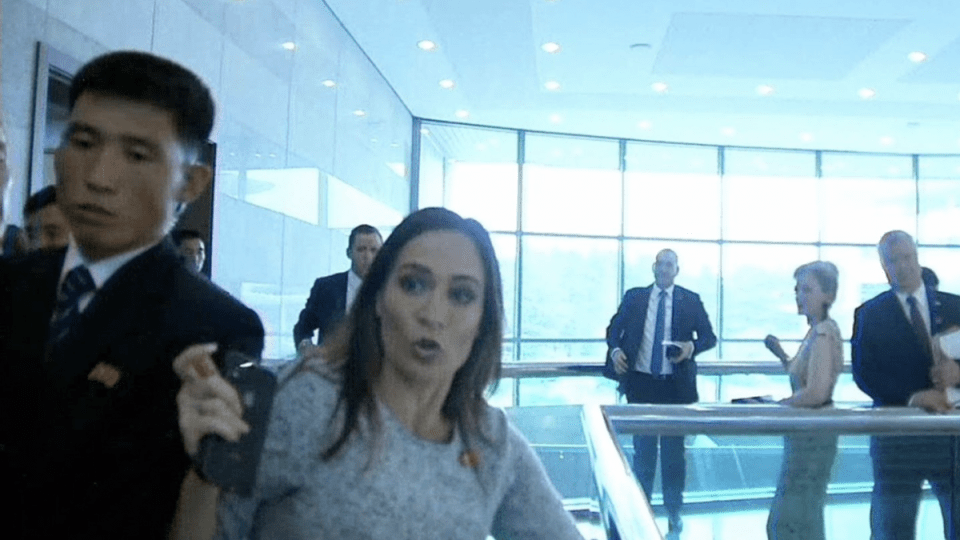 Dramatic footage has emerged showing Donald Trump’s newly-installed press secretary engaged in “an all-out brawl” with North Korean guards behind the scenes of the US President’s meeting with Kim Jong Un.

The scuffle reportedly erupted when North Korean officials tried to physically prevent US journalists from entering the room where Mr Trump spent an hour talking with Mr Kim.

Mr Trump made history Sunday by becoming the first sitting US president to step into North Korea when he met Mr Kim in the Korean demilitarised zone (DMZ).

The meeting marked the first time the leaders of the US and North Korea have met on the front line of the Korean peninsula conflict.

The pair shook hands over the border before Mr Kim invited Mr Trump to step across, echoing his invitation to South Korea’s President Moon Jae-in during their historic meeting in April, 2018.

The two leaders walked a little way into the North, shook hands again in front of North Korean press, and walked back into the South for their sit-down discussion.

It was then that Stephanie Grisham was forced to intervene as Mr Kim’s security guards began pushing and shoving reporters out of the way.

This is the moment White House Press Secretary Stephanie Grisham got into a scuffle with North Korean security guards who were blocking US journalists pic.twitter.com/WSBkdDw17g

Ms Grisham can be heard saying, “Go, go, go”, as she pushed a North Korean official aside to try to create a path to let members of the US press pool into the meeting.

She could also be heard shouting, “Stop, let go” and “I need help here” while others in the background yelled, “US pool”.

A source at the scene described the incident to CNN as an “all out brawl” and said Ms Grisham received bruising in the altercation.

Back home, critics slammed the historic meeting for lacking substance and elevating a ruthless dictator.

Some 2020 Democratic presidential candidates called it a publicity stunt and said Mr Trump wasted an important symbolic move when there has been little sign that North Korea has taken meaningful steps toward denuclearisation.

“Our President shouldn’t be squandering American influence on photo ops and exchanging love letters with a ruthless dictator,” US Senator Elizabeth Warren said in a Twitter post.

Her 2020 rival and US Senate colleague Bernie Sanders did not fault Mr Trump for meeting with Mr Kim.

“But I don’t want it simply to be a photo opportunity, the whole world’s media was attracted there,” Mr Sanders said. “What’s going to happen tomorrow and the next day?”

The meeting, initiated by a spur-of-the-moment tweet by Mr Trump that Mr Kim said took him by surprise, once again displayed the rapport between the two.

As he left South Korea on his flight to Washington, Mr Trump tweeted that he had “a wonderful meeting” with Mr Kim. “Stood on the soil of North Korea, an important statement for all, and a great honor!”

Mr Trump had predicted the two would greet one another for about “two minutes,” but they ended up spending more than an hour together.