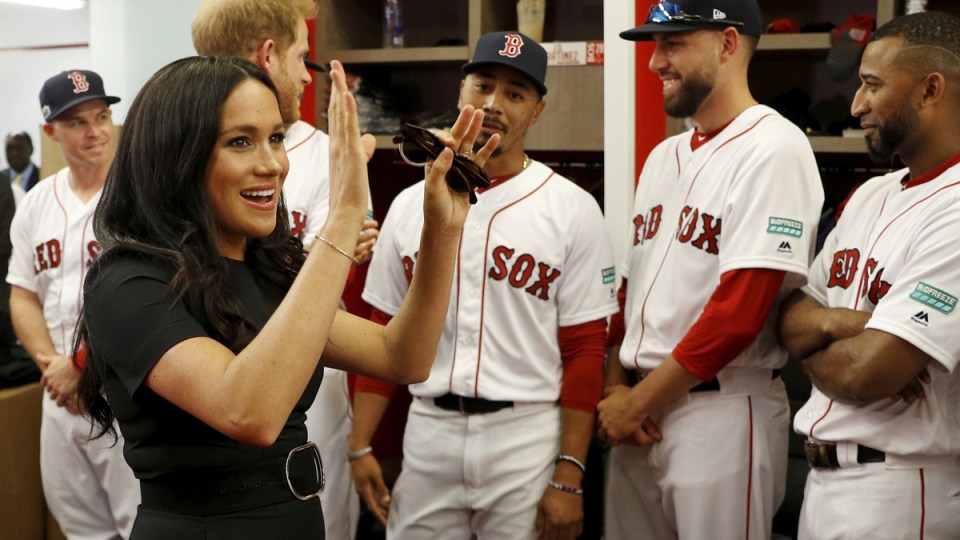 The Duchess of Sussex has made a surprise visit to a match between two of baseball’s biggest teams, where she hugged one of the players who is a distant relative.

Thousands of baseball fans roared as Meghan and the Duke of Sussex entered the field at the London Stadium before the first Major League Baseball game played in Europe.

It was known Harry would be there, and representatives from his Invictus Games Foundation charity threw the first pitches of the match between the Boston Red Sox and New York Yankees.

Before the game, the duchess told the Red Sox squad that she was “so glad they didn’t ask me to do it”.

“So am I,” replied the duke, prompting laughter from his wife and the players.

Players from both teams competed for the support of the royal couple’s newborn son Archie by giving his parents branded baby-sized merchandise when they met them before the game.

In the Red Sox changing room, Mookie Betts was the only player from either side to get a hug from Meghan, and he explained: “We’re family somehow.”

After the hug, Harry turned to the rest of the team to ask whether anyone else wanted to lay a claim to being related to Meghan, with a number of players raising their hands.

The Boston Globe reported last May that outfielder Betts had learned he was a distant relative of Meghan, as their ancestors are from the same part of Alabama, according to an amateur genealogist.

After the game, asked by Fox Sports if he was related to Meghan, Betts said: “Yes I read about it, I was informed, I was informed last year when I found out we were coming.

“So I figured, I hope I get to meet her, and I did, and I gave her a hug, and I think she invited me over for dinner.”

Harry admitted his poor knowledge of the sport to the assembled Red Sox players, asking: “I’m not that current with baseball – who normally wins?”

After the team presented the couple with the presents, the duke assured them they had him and his wife’s support, only to later tell the Yankees they had “beaten next door’s gift”.

The Invictus Games Foundation was chosen as an official charity partner of MLB’s London Series, which sees games played at the home of West Ham United football team on Saturday and Sunday.