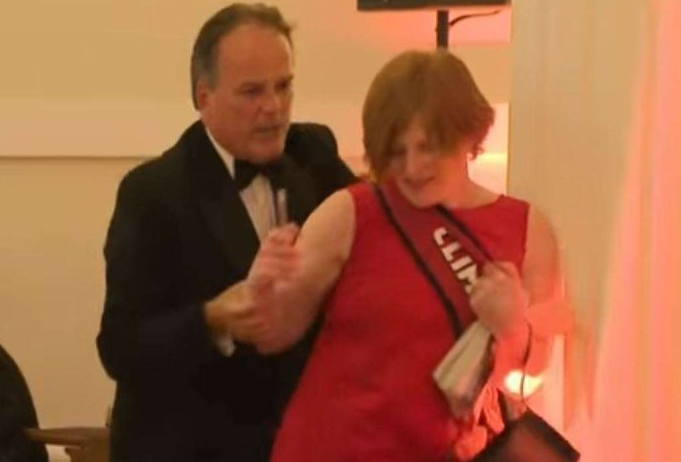 A British MP has been suspended as a Foreign Office minister after he was filmed grabbing a female protester by the neck during a black-tie event in London.

Mark Field, the MP for the Cities of London and Westminster, pushed the Greenpeace protester, identified as Janet Barker of Wales, against a pillar before grabbing her by the back of her neck and walking her out of the event at the iconic Mansion House.

Up to 40 climate protesters from Greenpeace had stormed a speech Chancellor of the Exchequer Phillip Hammond was making about the state of the economy to bankers and politicians.

City of London Police said they were looking into “a small number of third party reports of an assault”, while Mr Field has apologised and referred himself to the Cabinet Office and the Conservative Party for investigation.

Foreign office minister and Tory MP Mark Field has apologised for manhandling this climate change protester and escorting her from a dinner in London last night. Was he in the wrong? pic.twitter.com/uu3bUKAucx

Mr Field said guests felt threatened when the protester “rushed” towards a table and “instinctively acted”.

“There was no security present and I was for a split-second genuinely worried she might have been armed,” Mr Field said in a statement.

“I deeply regret this episode and unreservedly apologise to the lady concerned for grabbing her but in the current climate I felt the need to act decisively to close down the threat to the safety of those present.”

A spokeswoman for Downing Street said Prime Minister Theresa May had seen the footage and “found it very concerning”.

Labour MP Dawn Butler described the video as “horrific”, but some Conservative MPs have come out in support of Mr Field, citing recent threats made against politicians.

Mark Field's actions "were really over the top" and "I didn't expect to be grabbed by the neck" says Greenpeace activist Janet Barker, saying their planned action was to "stand there dignified"

“He panicked, he’s not trained in restraint and arrest, and if you think this is ‘serious violence’, you may need to recalibrate your sensitivities,” he wrote.

“Calm down, move on, and be thankful this wasn’t worse.”