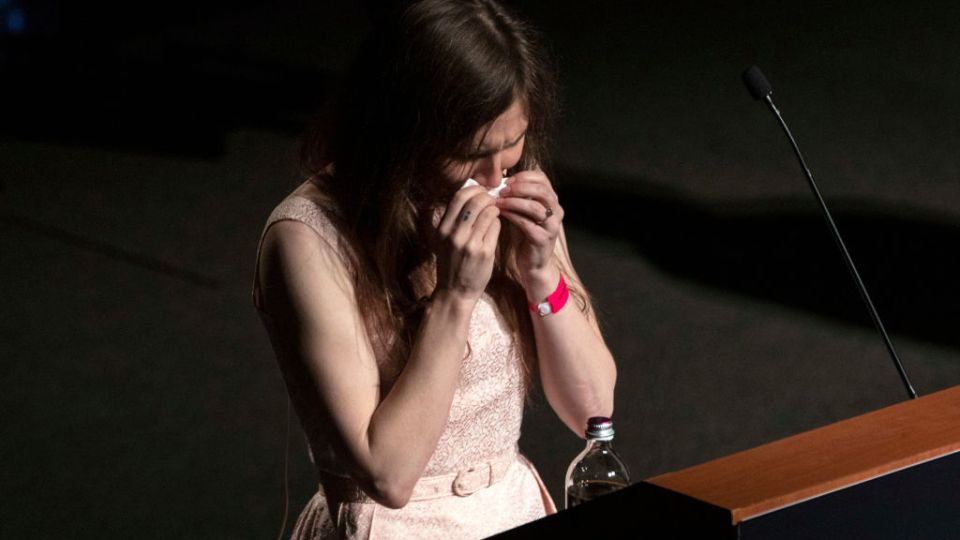 Wrongly convicted murderer Amanda Knox delivers a speech about Trial by Media on her first return to Italy since being freed from prison. Photo: Getty

An emotional Amanda Knox has spoken out in defence of her version of what happened the night her roommate was killed.

On her first return to Italy since being freed from jail after an eight-year legal battle, Ms Knox broke down in tears while giving a speech at a Trail By Media convention.

“I was innocent. But the rest of the world had decided I was guilty,” Ms Knox said at the convention on wrongful convictions and miscarriages of justice in Modena on Saturday.

“My innocence did not save me,” a visibly moved Knox told the audience, saying it was “impossible” for her to receive a fair trial in Italy.

Ms Knox told the audience, which included dozens of journalists, that years after the legal ordeal ended she still faced harassment and mockery.

She will “always be connected with the murder of my friend”, said Ms Knox, who lives in Seattle and works as writer and journalist.

The American captured attention more than a decade ago as a US student living on the outskirts of the medieval Italian town of Perugia.

It was there that her roommate, British exchange student Meredith Kercher, was raped and found dead with her throat slit on November 1, 2007.

Ms Knox spent four years in an Italian prison for the crime. She was definitively cleared in 2015 after an eight-year legal battle conducted in the glare of a global media frenzy.

She accused the media of having built a false narrative around her, depicting her as guilty despite her proven innocence.

Speaking in Italian at the panel discussion titled “Trial by media“, Ms Knox said she was depicted “on the global scene as cunning, psychopath, drugged, whore. Guilty.”

Speaking through tears, she said the media invented a “false and baseless story, which fuelled people’s fantasies”.

Ms Knox is not expected to return to Perugia during her brief stay in Italy, according to the ANSA news agency.