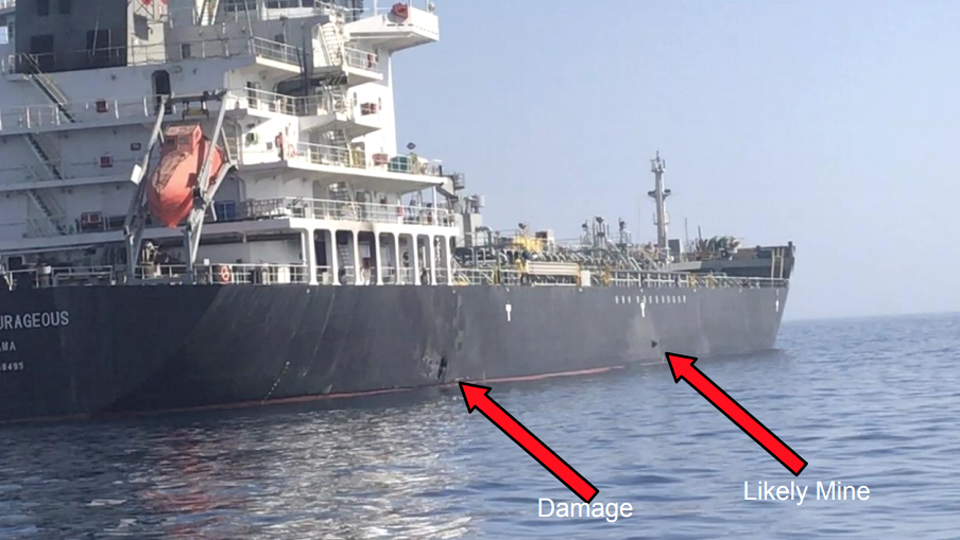 The US military has released a video that it says shows Iran’s Revolutionary Guard removing an unexploded mine from the side of a Japanese-owned oil tanker, as Washington blamed Iran for two attacks rattling global oil markets.

The release appeared to be part of US efforts to convince the international community of Iran’s culpability in attacks on the Kokuka Courageous and the Norwegian-owned Front Altair.

The crews of both vessels abandoned their ships, leaving them adrift in waters between Gulf Arab states and Iran, after the twin blasts.

“[It] was observed and recorded removing the unexploded limpet mine from the Kokuka Courageous ” Captain Urban said.

The Iranian mission to the United Nations said in a statement on Friday (Australian time) that Iran “categorically rejects the US unfounded claim with regard to 13 June oil tanker incidents and condemns it in the strongest possible terms”.

“The US and its regional allies must stop warmongering and put an end to mischievous plots and false flag operations in the region.”

In response, Captain Urban said: “The United States has no interest in engaging in a new conflict in the Middle East … However, we will defend our interests”.

Secretary of State Mike Pompeo told an earlier media conference that the US believed Iran was responsible for the attacks.

“This assessment is based on intelligence, the weapons used, the level of expertise needed to execute the operation, recent similar Iranian attacks on shipping, and the fact that no proxy group operating in the area has the resources and proficiency to act with such a high degree of sophistication,” Mr Pompeo said.

A US Navy ship, the USS Bainbridge, rushed in to assist the stricken vessels, which were loaded with petroleum products.

The Front Altair burned for hours, a fire that charred half of one of the vessel’s sides and sent up a column of thick, black smoke.

Washington also accused Tehran of being behind a similar attack on May 12 on four tankers in the same area, a vital shipping route through which much of the world’s oil passes.

Tensions between Iran and the US, along with its allies, have risen since Washington pulled out of a deal last year between Iran and global powers that aimed to curb Tehran’s nuclear ambitions.

Iran has repeatedly warned it would block the Strait of Hormuz if it cannot sell its oil due to US sanctions.

Iranian Foreign Minister Mohammad Javad Zarif described the incidents as “suspicious” on Twitter and called for regional dialogue. Tehran has also denied responsibility for the May 12 attacks.

Russia, one of Iran’s main allies, was quick to urge caution, saying no one should rush to conclusions about the incident.

While I very much appreciate P.M. Abe going to Iran to meet with Ayatollah Ali Khamenei, I personally feel that it is too soon to even think about making a deal. They are not ready, and neither are we!

UN Secretary-General Antonio Guterres told a meeting of the UN Security Council on co-operation between the United Nations and the League of Arab States: “Facts must be established and responsibilities clarified.”

He warned that the world cannot afford “a major confrontation in the Gulf region”.

Crude oil prices climbed as much as 4.0 per cent after the attacks near the entrance to the Strait of Hormuz, a crucial shipping artery for Saudi Arabia, the world’s biggest oil exporter, and other Gulf energy producers.

“We need to remember that some 30 per cent of the world’s [seaborne] crude oil passes through the straits. If the waters are becoming unsafe, the supply to the entire Western world could be at risk,” said Paolo d’Amico, chairman of INTERTANKO tanker association.

Japanese Prime Minister Shinzo Abe, who was visiting Tehran when Thursday’s attacks occurred, urged all sides not to let tensions in the area escalate.

Britain said it was “deeply concerned” about the attacks.

Germany, which like Britain remains a signatory to the nuclear pact with Iran, said the “situation is dangerous” and all sides needed to avoid an escalation.

US releases video after twin blasts on Gulf oil tankers