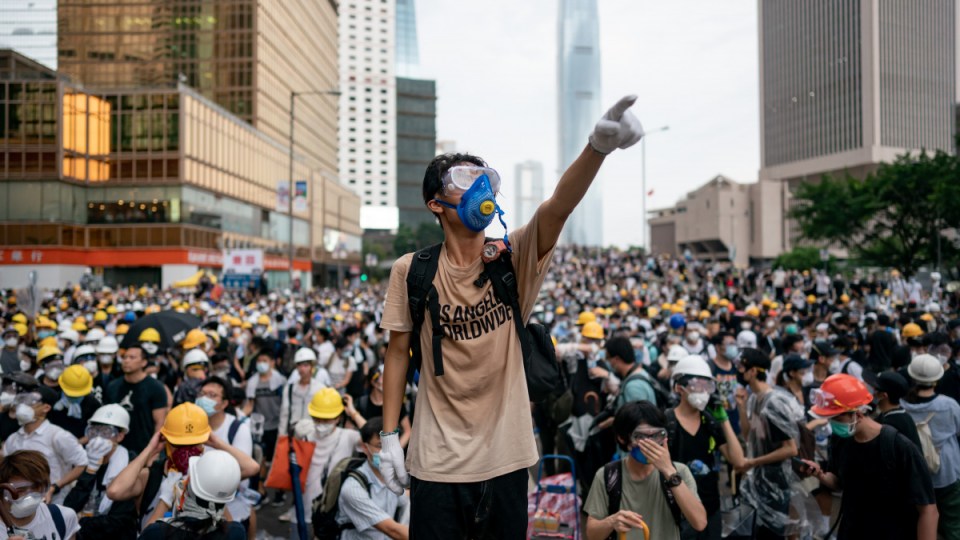 The Chinese government has been accused of attempting to silence the Hong Kong protesters. Photo: Getty

The Chinese government has been accused of attempting to silence the Hong Kong protests by hacking an encrypted messaging app used by thousands of demonstrators.

The messaging app used to organise the protest was hacked and taken offline just as violence erupted in the CBD, with police using rubber bullets and tear gas to disperse the demonstrators.

Hong Kong locals told The New Daily police were “out of control” and they were desperate to get attention on the heavy-handed tactics.

While the intensity of the protests lessened overnight, organisers have said they are planning their return to the streets this weekend.

Eighty-one protesters were injured in clashes with police earlier this week, according to medical authorities.

One journalist shared photographs of his injuries after police pepper sprayed him, with witnesses claiming he was set upon even while seeking help.

“When he was washing at the injury station, police continued to spray him,” one woman told The New Daily.

“Please help us … (get) attention (to) Hong Kong police violence.

“They have full set of arms and excessive violence against weak students … (and) journalists from other countries.”

Meanwhile, Telegram’s founder Pavel Durov announced that the app had been hit by a ‘powerful’ cyberattack that had come from mainland China.

“Historically, all state actor-sized DDoS (200-400 Gb/s of junk) we experienced coincided in time with protests in Hong Kong (co-ordinated on @telegram). This case was not an exception,” he tweeted.

The app was used to disseminate tactics and ensure people got supplies such as masks, cling film, water and milk.

Cybersecurity expert at La Trobe University Dr Stanley Shanapinda said the app was popular among protesters due to its ability to self-destruct messages and host group chats of up to 200,000 people.

“They used it to co-ordinate the protests and the additional security benefit is that Telegram allows for secret chats. You can set a timer and afterwards the message self-destructs,” Dr Shanapinda said.

The attack disabled the service by flooding it with fake message requests sent through computers, which were traced back to China.

“The facts are that most of the source IP addresses are from China and the size of the attack indicates that it was a state. Put one and one together and they make two,” Dr Shanapinda said.

Cutting communication pushes protesters onto other messaging apps such as WhatsApp, where a government may be able to hack the data and see who is organising the protests, he said.

“They can’t co-ordinate, there’s darkness and what that does is force them to use a tool like WhatsApp,” Dr Shanapinda said.

“WhatsApp would have other vulnerabilities that could be exploited by the Chinese government because they would have had access to the content.”

‘We suffered a lot’

This week’s protests have brought the worst violence Hong Kong has seen since Britain handed it back to Chinese rule in 1997.

Mary, a local Hong Kong student, told The New Daily that she had been peacefully protesting on Tuesday before she was tear-gassed by the police.

“To me, it was just all of a sudden, when the crowd under the bridge shouted ‘Back! Step back!’ and then a choking smoke has diffused in the air, my eyes tear [up] and my throat choked,” she said.

“As people stepping back, another tear gas was fired at the side they were walking to, so they had to turn back again. After a few rounds of repetition, the police fired tear gas under the bridge.

“Citizens staying on the bridge were unarmed, unequipped, may even not put on a mask. We suffered a lot.”

She said it turned into chaos as protesters scrambled and some shouted, ‘Please don’t go, Hong Kong needs you,’ before she heard that they were being shot at.

“My friend and I were afraid of the abuse of police force so we left.”

On Wednesday the violence erupted again as the police tried to move demonstrators on, freelance journalist Erin Hale said.

“Basically the riot police moved in on the protesters. I think that the police were afraid of a situation like 2014, where the protesters camped overnight and they stayed for weeks,” she said.

“They were determined to move them on so they used much more aggressive attacks. So many people got hurt. It felt like a battle.”

The protests had calmed down by Thursday night as people wait for the second reading of the bill, but Hale said the mood in the streets was “desperate”.

“People are pretty scared and angry. The feeling is desperation. A lot of people think it’s the last chance for Hong Kong and if it’s implemented there will be no more freedom of speech.”