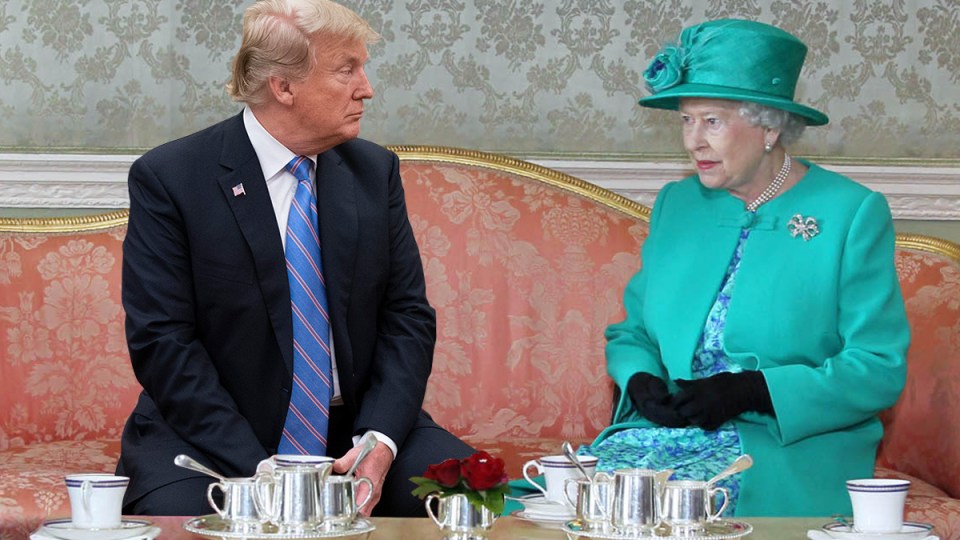 Donald Trump was invited by the Queen for his first official state visit. Photo: AAP

Silverware gleams and tiaras are at the ready, ahead of the June 3 start of Donald Trump’s official state visit to the UK, with all the pomp the occasion entails.

Melania Trump, 49, will accompany her 72-year-old husband, who’ll become the third US president—after George W. Bush in 2003 and Barack Obama in 2011—to be received by the Queen on a state visit.

According to the royal family’s website, a state visit is when the Queen travels to, or hosts, visitors from abroad, with the goal of “strengthening Britain’s relationship with countries across the world”.

One item on the First Couple’s packed, three-day itinerary especially piqued royal watchers’ interest – afternoon tea with the Prince of Wales and Camilla, Duchess of Cornwall, at their home, Clarence House, on day one.

The meeting, which Prince Charles reportedly “agreed” to, will follow a ceremonial welcome in the garden of Buckingham Palace complete with royal gun salute, a private lunch at the palace (reportedly including Prince Harry) and wreath-laying with Prince Andrew at the grave of the Unknown Soldier at Westminster Abbey.

Then it’s tea time. Though they’ve met before – in New York in 2005 – conversation could be awkward, considering Mr Trump and the 70-year-old heir to the throne appear to share little more in common than an age bracket.

A longtime advocate for the environment, Charles may find himself at loggerheads with Mr Trump, should the topic turn to climate change.

In a March 12 tweet, Mr Trump quoted climate-change sceptic Patrick Moore, a Greenpeace founder who has gone rogue, that “the whole climate crisis is not only Fake News, it’s Fake Science” and then added, “Wow!”

Whereas in 2015, Charles addressed the opening session of the United Nations’ Paris conference on climate change: “Your deliberations will decide the fate not only of those alive today but also of generations yet unborn,” he told world leaders. 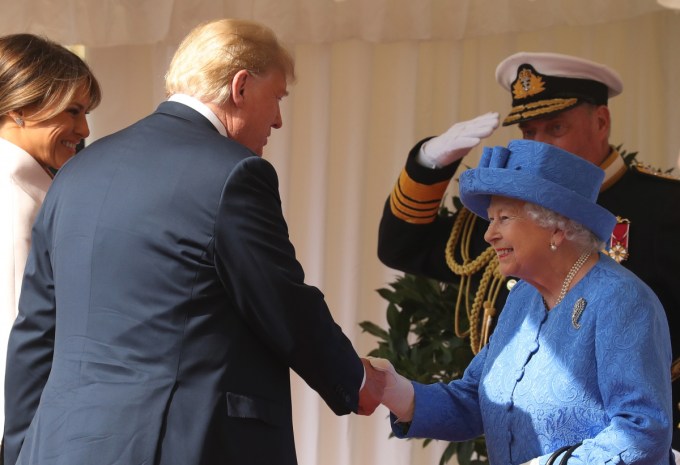 President Trump greets the Queen during a visit in July 2018. 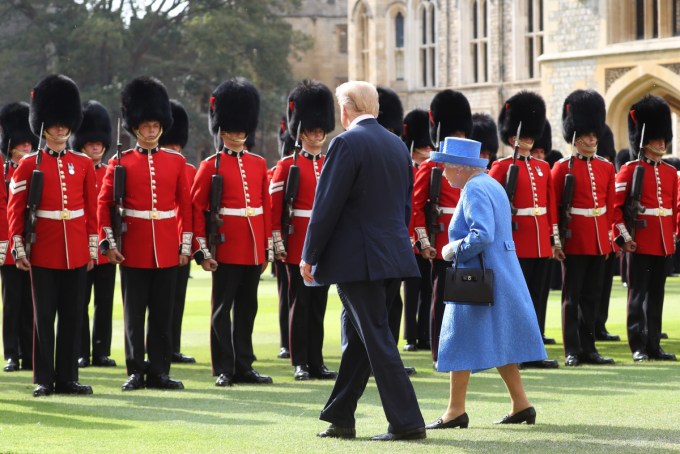 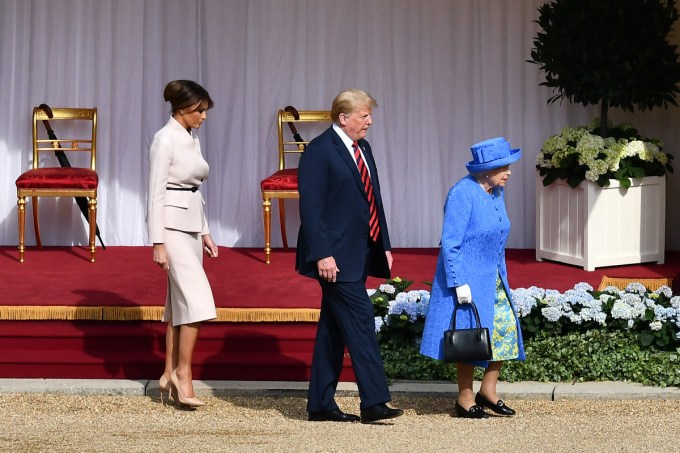 President Trump and the First Lady greets the Queen during a visit in July 2018. 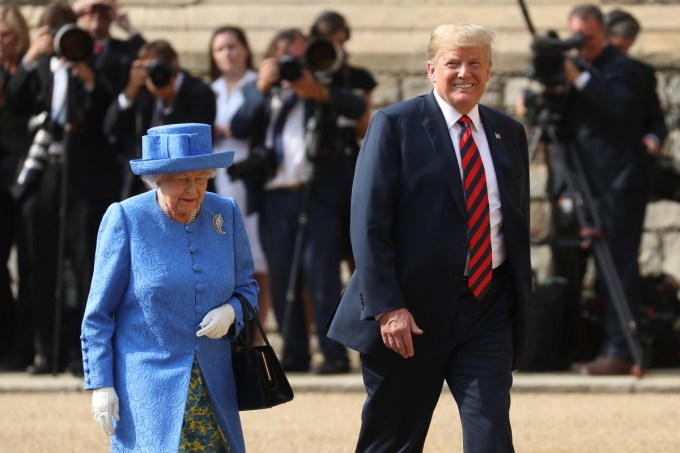 President Trump greets the Queen during a visit in July 2018.

Whatever unfolds over tea, the pair are likely to be mindful that they’ll cross paths three more times during the official state visit, beginning that evening at a lavish state banquet – cue tiaras, but not for the Duchess of Sussex, who’s still on maternity leave after giving birth to baby Archie on May 6.

Count on the Duchess of Cambridge, however, to deliver royal glamour, with Prince William and other public figures also in attendance. Both the Queen and Mr Trump are expected to give speeches.

Royal watchers will be keenly observing the Queen’s choice of outfit – especially her brooch.

Last year her choice to wear a decorative pin given to her by the Obamas set tongues wagging about its hidden meaning, amid theories the monarch used her brooch collection to send secret messages about how she felt about guests.

The day after the banquet, Mr Trump will host a breakfast for UK and US business leaders with the Duke of York and outgoing British Prime Minister Theresa May.

He’ll also hold talks with Ms May at No 10 Downing Street, attend a joint media conference, and host a dinner at the Regent’s Park residence of the US ambassador, which Charles and Camilla will also attend.

On June 5, the Trumps will commemorate the 75th anniversary of the June 6 D-Day landings, joining the Queen and the dutiful Prince of Wales in Portsmouth for an official event alongside D-Day veterans, drawing to a close the controversial state visit which for two years seemed unlikely to eventuate.

Mr Trump was invited for a state visit – an offer only the Queen can extend – shortly after being sworn in as president in 2017, but it was repeatedly delayed, reportedly due to fears over anti-Trump protests.

Those fears seemed warranted in July 2018, when Mr Trump met with the Queen for a “working” visit.

More than 250,000 protesters turned out for a “Stop Trump” march in London, where a six-metre effigy depicting the US President as a wailing baby floated over the crowds, and it’s set to make a comeback next week, confirmed protest organisers.

Mr Trump “is not in the same class,” as Bush and Obama, said London Mayor Sadiq Khan, who’s been the target of Mr Trump’s wrath in the past.

“Of course, we should have a close relationship with the President of the United States,” he told British radio. “But we shouldn’t be rolling out the red carpet.”