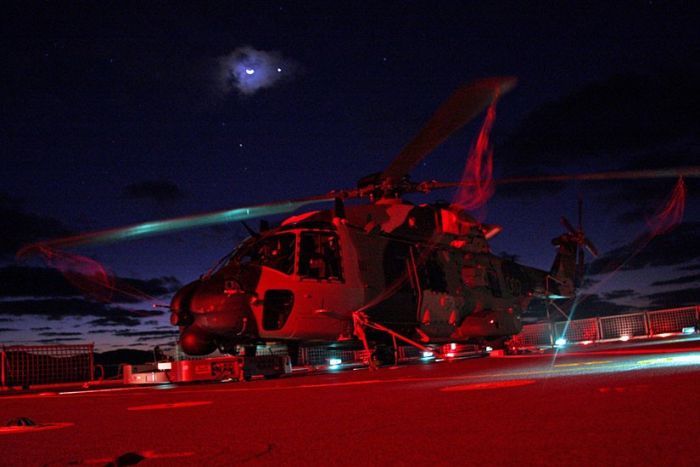 Australian navy pilots flying high over the disputed South China Sea were forced to make a precautionary landing after their helicopters were attacked by lasers emanating from passing fishing boats, military officials have confirmed.

The ABC reported that the Australian navy was closely followed by the Chinese military in a recent transit of the South China Sea.

Australian military officials believe the series of laser attacks on Navy helicopters came from Chinese maritime militia vessels, but this has not yet been formally confirmed.

In an anecdotal account posted on the website The Strategist, scholar Euan Graham reported the laser beams appeared to be coming from passing fishing vessels while he was on board the flagship HMAS Canberra.

“Was this startled fishermen reacting to the unexpected? Or was it the sort of coordinated harassment more suggestive of China’s maritime militia? It’s hard to say for sure, but similar incidents have occurred in the western Pacific,” he wrote on the website, which is run by the Australian Strategic Policy Institute, an independent, non-partisan think tank based in Canberra.

Mr Graham said his vessel was being trailed by a Chinese warship during its voyage from Vietnam to Singapore.

China denied that its forces targeted the military aircraft.

The South China sea is a vital commercial gateway for international shipping but claims of territorial sovereignty over islands and smaller features have been a longstanding source of tension and distrust in the region.

China, Taiwan, Philippines, Malaysia, Brunei and Vietnam all have competing claims and the US is invested in upholding the rules-based order in the region.

The US and its allies insist on the right to sail and fly anywhere in the area is permitted under international law, despite China’s differing interpretation of such guidelines.

The US military recently sent two navy ships through the Taiwan Strait and earlier in May a US-led coalition of navy ships sailed through the South China Sea in what is yet another sign of growing tensions in the region.

Mr Graham said that while Australia’s bridge-to-bridge communications with the Chinese during its voyage were courteous, the Chinese requested Australian warships notify them in advance of any corrections to their course.

That was something the Australian navy was “not about to concede while exercising its high-seas freedoms,” Mr Graham wrote.

He wrote that the constant presence of Chinese vessels shadowing foreign ships appeared to indicate that the Chinese fleet had grown large enough to allow it to have vessels lying in wait for just such orders.

He said their trailing actions also appeared to show that China’s over-the-horizon surveillance capability was also maturing, supported by technology based at points such as Fiery Cross Reef in the contested Spratly island group, where China has built military installations and an airstrip atop coral reefs.

Mr Graham, who is executive director of La Trobe Asia at La Trobe University in Australia, was one of several academics invited to observe Australia’s engagement exercise Indo-Pacific Endeavour 2019.