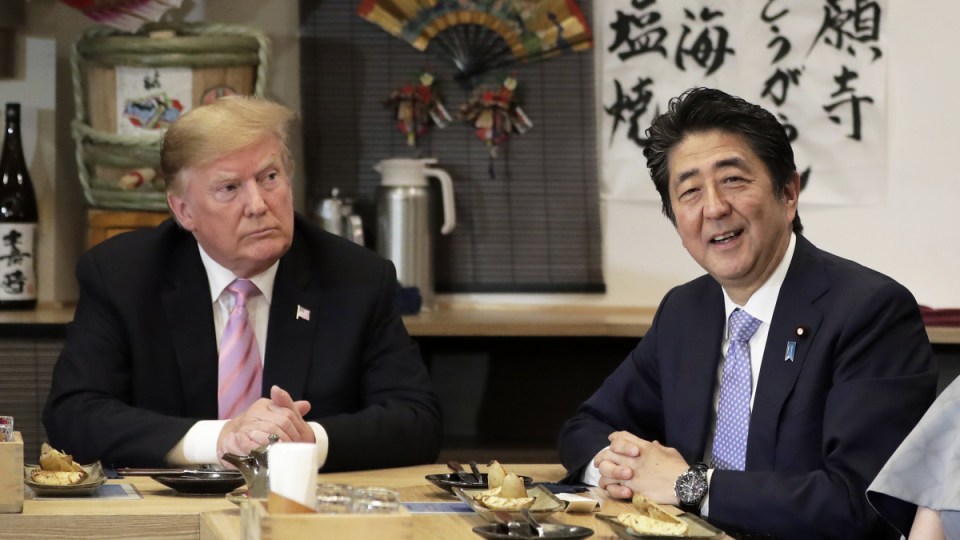 As Donald Trump was courted with golf, cheeseburgers and a historic visit to a sumo tournament, the US President marked his state visit to Japan by siding with North Korea.

Mr Trump kicked off the first full day of the state visit by playing down North Korea’s recent tests of short-range ballistic missiles, undercutting declarations by both Prime Minister Shinzo Abe and the President’s own national security adviser that the launches violated United Nations resolutions.

“North Korea fired off some small weapons, which disturbed some of my people, and others, but not me,” Mr. Trump wrote on Twitter from his hotel in Tokyo.

Japanese officials are very worried about the “small weapons” Mr Trump dismissed, which could strike Japan and are often pointed in its direction.

North Korea’s state-run news agency issued a blistering attack last week on Mr Biden, who has been critical of the reclusive communist state in the past.

“I think they agree in their assessment of former vice president Joe Biden,” Mr Sanders said of two leaders from Japan.

Mr Trump was later given the red carpet treatment at Japan’s Imperial Palace, where he made history by becoming the first world leader to meet with the new emperor of Japan.

Emperor Naruhito ascended to the throne on May 1, opening what is called the era of “Reiwa,” or “beautiful harmony.”

Mr Trump and first lady Melania kicked off the formal visit with greetings with Naruhito and Empress Masako.

Mr Trump’s talks with Mr Abe are likely to be centred upon trade and North Korea. Trump has repeatedly criticised Japan for its chronic trade surplus with the US, threatening to slap tariffs on Japanese cars and car parts.

But he claimed on Sunday that “great progress” had been made in trade talks.

“Great progress being made in our Trade Negotiations with Japan. Agriculture and beef heavily in play,” Trump tweeted, having previously urged Abe to open the country’s automotive and agriculture markets.

On Sunday, Mr Trump and Mr Abe played golf and watched a sumo wrestling match at the Ryogoku Kokugi-kan, where the president presented a special US-made trophy to rank-and-file wrestler Asanoyama, the winner of the Summer Grand Sumo Tournament in Tokyo.

The President, who is the first American to participate in the tournament, read a certificate awarding Asanoyama the cup in honour of his “outstanding achievement”.

He then hoisted the hefty cup, which the White House said stands 137cm tall and weighs 27 to 32 kilograms, into Asanoyama’s arms with the help of an official.

Asanoyama was also presented with the Prime Minister’s and Emperor’s Trophies.

Watching the wrestlers, Mr Trump sat in a low-back chair, breaking the custom of sitting cross-legged on a mat.

The Japan Sumo Association instituted some safety precautions because of Mr Trump, including halving the number of same-day tickets sold. Ticket holders also had their bags checked at the entrance, and canned and bottled drinks were banned.

The throwing of zabuton cushions that participants sit on – something that’s traditionally done to express disappointment – also was banned.