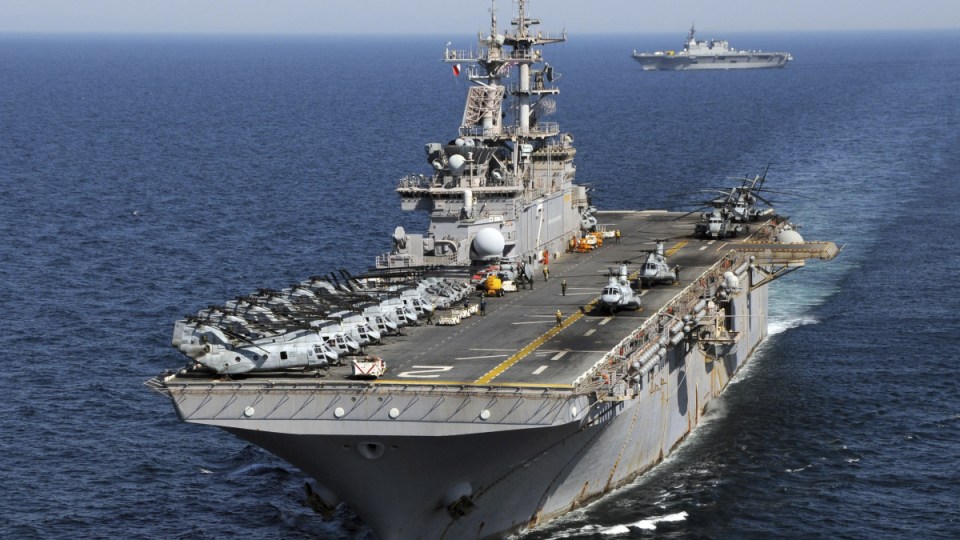 The US has sent warships to the Middle East as a warning to Iran. Photo: Getty

The United States will send 1500 extra troops and 12 fighter jets to boost defences in the Middle East amid escalating tensions with Iran.

It follows several weeks of mounting aggression from both nations, fuelled by suspicious tanker bombings in the region and a series of fiery exchanges on social media.

Saudi Arabia said two of its oil tankers had recently been damaged in mysterious circumstances in the Persian Gulf, and the United Arab Emirates said last week that four commercial vessels had been sabotaged near the Gulf of Oman.

Tensions surged again on Friday when the United States’ department of defence publicly blamed Iran for attacking oil tankers near the United Arab Emirates, as well as a rocket attack in Iraq.

Earlier, US President Donald Trump had declared Iran would face destruction if it threatened the US, tweeting that if Tehran wanted to fight it would be the country’s “official end”.

If Iran wants to fight, that will be the official end of Iran. Never threaten the United States again!

He also blamed predecessor Barack Obama for helping the oil rich country become “the largest state sponsor of terrorism in the world”.

Iran’s foreign minister Mohammad Javad Zarif responded on Twitter by accusing the US president of having been “goaded” into “genocidal taunts”.

But on Friday Mr Trump abruptly softened his tone, even suggesting he would be open to negotiations with the Islamic Republic.

He told reporters that the 1500 extra troops heading to the Middle East would perform a “mostly protective” role as part of a response to what he described as a threat from Iran.

“Right now, I don’t think Iran wants to fight, and I certainly don’t think they want to fight with us,” he said.

Pentagon officials said the proposed troop reinforcements were not a response to any new threat from Iran but aimed at strengthening security for existing forces.

They said the troops would be defensive forces and discussions included additional Patriot missile batteries, more ships and increased monitoring.

This week officials said the missiles have been taken off the boats near Iran’s shore, but other maritime threats continue.

Many in Congress are skeptical of the administration’s approach to Iran, questioning whether it is responding to significant new Iranian threats or escalating a situation that could lead to war.

Adding fuel to the flames was Mr Trump’s recent decision to clear the sale of billions of dollars’ worth of weapons to Saudi Arabia, citing ongoing tensions with Iran.

He did so by invoking a rarely used aspect of federal law to push through the $US8 billion deal, which would usually need to be approved by Congress.

He said tensions with Iran amounted to a national emergency.

The move has angered those who fear the weapons may be used against civilians.

Why the growing tensions?

The Trump administration suspects Iran is planning an attack on US targets, though few details have been released publicly.

In response to this perceived threat, the US has moved military reinforcements to the region and cut back on personnel in neighbouring Iraq.

Iran, meanwhile, believes the US wants a regime change either by way of economic pressure (Mr Trump reinstated US sanctions) or military force.

Iran has indicated it would consider restarting some activities related to its nuclear program if it didn’t receive financial help from Europe.