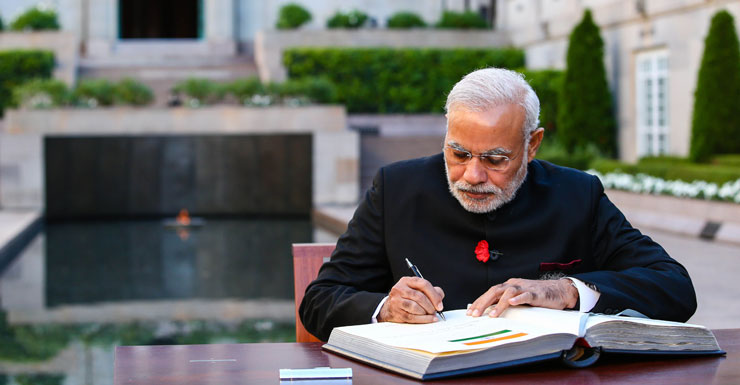 In a resounding election victory, Narendra Modi has convincingly won his second five-year term, making it the first time a non-Congress prime minister has returned to power in the Indian political history.

With the final rounds of counting still underway, the Bharatiya Janata Party (BJP)-led National Democratic Alliance (NDA) has crossed the majority mark of 272 and is leading in nearly 350 of the 542 seats that went to the polls, official data from the Election Commission showed.

More history was made as BJP won the first single-party majority of any party since 1984.

Following his election victory speech in which he promised to unite the nation, Mr Modi received a congratulatory message from his Pakistani counterpart Imran Khan, with hopes of restoring their strained relationship.

Responding to Mr Khan’s message, Mr Modi said that he has always “given primacy to peace and development in our region.”

I warmly express my gratitude for your good wishes. I have always given primacy to peace and development in our region. https://t.co/b01EjbcEAw

Us President Trump also took to Twitter to congratulate Mr Modi for the landslide victory, saying he was looking forward to working him.

“Great things are in store for the US-India partnership with the return of PM Modi at the helm,” Mr Trump wrote.

Congratulations to Prime Minister @NarendraModi and his BJP party on their BIG election victory! Great things are in store for the US-India partnership with the return of PM Modi at the helm. I look forward to continuing our important work together!

Mr Modi said his win is a “guarantee of a bright future for the common people of this country.”

“This is not Modi’s victory, this is the victory of the hopes and dreams of the struggling people of the country.

“This is the win for the women who have been waiting for toilets.

“This is a win for the farmers of this country who work hard to fill the stomachs of the people of the country.”

He ended his victory speech by saying the people should “accept this election with love”.

Australia’s Prime Minister Scott Morrison was one of the first international leader to applaud Mr Modi, saying he looked forward to meeting the leader of the world’s most populous democracy in the near future.

Thank you India! The faith placed in our alliance is humbling and gives us strength to work even harder to fulfil people's aspirations.

I salute every BJP Karyakarta for their determination, perseverance & hardwork. They went home to home, elaborating on our development agenda.

“Together we will build a strong and inclusive India,” Mr Modi earlier tweeted.

He will be under pressure to provide work opportunities for the tens of millions of young people coming on to the job market in the next few years and to boost depressed farm incomes.

But making good on his promise of unity will be difficult as the BJP campaign was often divisive, and members of the minority Muslim community expressed fears that they were being treated as second-class citizens.

His pledge to take a strong stand against a separatist movement in the Muslim-majority Kashmir region has added to tensions with nuclear-armed rival Pakistan.

Members of his party now want him to take a harder line on national security, as well as build a Hindu temple on the site of a mosque that was demolished by a Hindu mob in Ayodhya in 1992.

Congratulations @narendramodi on your historic re-election as Prime Minister of India. Australia and India enjoy a strong, vibrant and strategic partnership, and our India Economic Strategy will take our ties to a new level. I look forward to meeting again soon.

“I want Modi to finish terrorism from Kashmir (and) make Pakistan bite the dust again and again,” said Shekhar Chahal, a BJP worker from New Delhi.

“I am confident that Modi will also make the temple in Ayodhya.”

Cheering supporters set off firecrackers and showered the mastermind of the campaign, BJP President Amit Shah, with petals as he arrived at party headquarters in New Delhi.

“It’s a stamp of approval by voters on the honest and decisive leadership of Prime Minister Modi,” said Nalin S Kohli, a BJP spokesman.
Congress leaders were sombre.

“Why despite a weak economy people preferred the BJP is something we have to understand,” said Salman Soz, a party spokesman.

“People have given them a second chance. I hope they use it well.”

‘What a hit’: Albanese on attack after dire wages data
Inquiry into mother’s convictions over deaths of four children
Viagogo loses appeal over $7 million penalty
Sydney home sprayed with bullets in gang violence
‘Admit what the hell is going on’: Biden wants US to face White Supremacy problem
Device detonated, man arrested in Brisbane sieges
US navy sails Taiwan Strait amid tensions with China
Today's Stories

Narendra Modi returned as India’s PM in a landslide victory