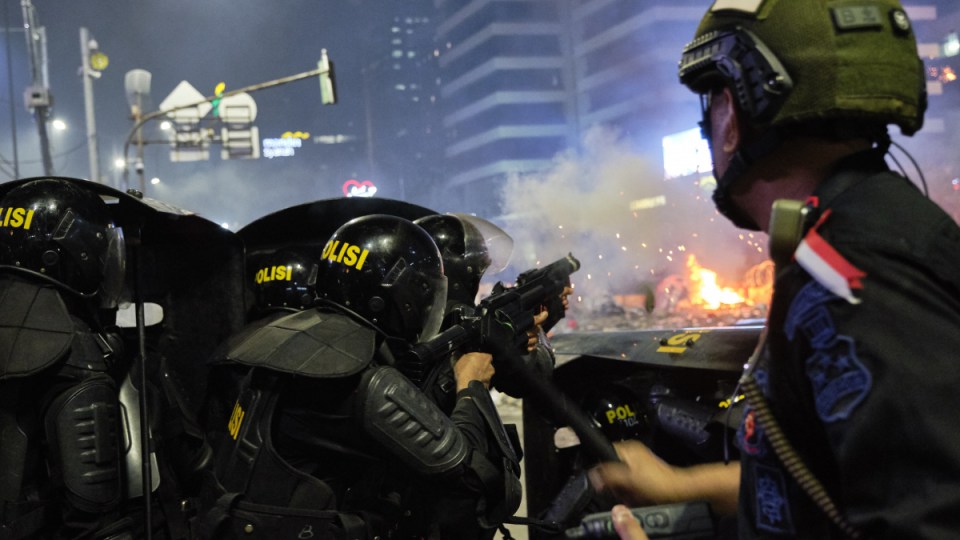 Calm has returned to the streets of Jakarta after a second night of clashes between security forces and protesters over the outcome of last month’s election, which handed Indonesian President Joko Widodo a second term.

Many of the protesters appeared to have come from outside Jakarta and police found envelopes containing money on some of the people they searched, national police spokesman Muhamad Iqbal said.

“This is not a spontaneous incident, this is something by design. There are indications that the mobs are paid and bent on causing chaos,” he said.

Downtown areas of the capital became a battlefield of tear gas, rubber bullets, rocks and firecrackers overnight, with protesters tearing up slabs of pavement, destroying signs and setting fire to food stalls.

However, their numbers thinned as the night wore on and police spokesman Dedi Praseyto said the last remaining protesters had dispersed by 7am.

Roads that were quiet on Wednesday as office workers stayed away from the city centre were abuzz with rush-hour traffic. Government workers in orange overalls swept debris off city streets.

The ABC reports its TV crew was set upon by a mob and had to be saved by unarmed Indonesian soldiers who ushered them to safety in a nearby hotel.

Mr Widodo won more than 85 million of 154 million votes cast but former general Mr Prabowo alleged “massive cheating and irregularities” and refused to concede defeat. The election supervisory agency has said there was no evidence of systematic cheating and observers said the poll was free and fair.

A crowd of protesters duly swelled outside the supervisory agency’s headquarters on Wednesday, some carrying wooden poles and some with toothpaste smeared around their eyes to mitigate the effects of tear gas.

Many left, but as night fell others hurled firecrackers and other objects and set fires as they tried to breach barbed wire separating them from police. Police responded with tear gas, rubber bullets and a water cannon.

Mr Probowo, in a video posted on his Twitter account before midnight on Wednesday, urged his supporters to leave peacefully.

Mr Prabowo’s camp said it planned to contest the result of the election – which gave Widodo a 55.5 per cent share of votes – in the Constitutional Court on Thursday. Mr Prabowo also launched an unsuccessful legal challenge after Mr Widodo defeated him in the 2014 election.

Analysts say Mr Widodo’s double-digit margin of victory means the opposition does not have a strong case to claim rigging but he may be able to count on continued agitation over the election result by Islamist supporters.