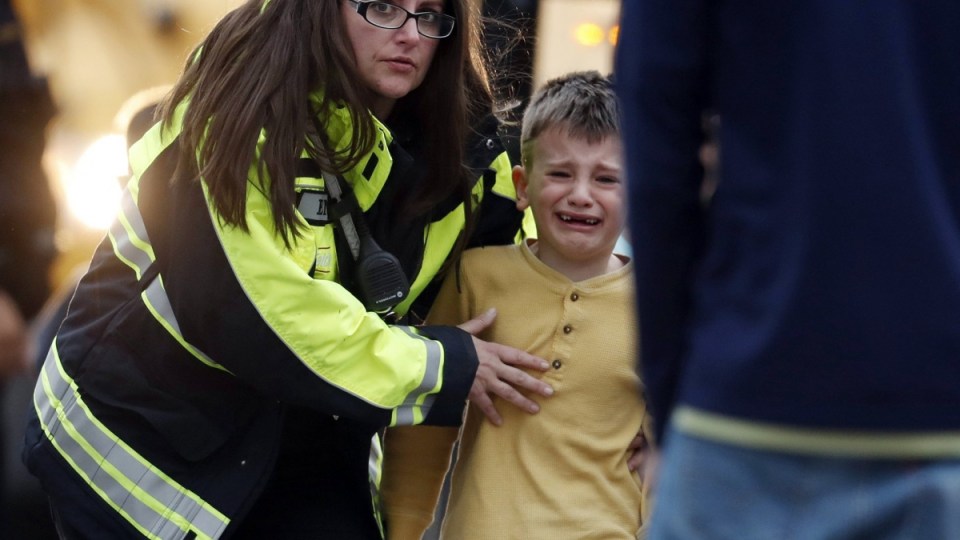 Two students armed with guns have burst into a science and technology school in the US state of Colorado and opened fire, wounding seven and killing one of their schoolmates before being taken into custody.

Local police said an 18-year-old male student was killed in the rampage at the Science, Technology, Engineering and Math School at Highlands Ranch, a Denver suburb.

Several victims were in critical condition at local hospitals and in surgery.

“Two individuals walked into the STEM school, got deep inside the school, and engaged students in two separate locations,” Douglas County Sheriff Tony Spurlock said at a briefing on Tuesday.

The suspects were identified only as students of the school, which serves students from kindergarten through to 12th grade.

Deputies from the Douglas County Sheriff’s office responded to reports of gunfire at the school on Monday afternoon, local time.

Mr Spurlock said deputies arrived at the STEM school within two minutes of the first reports, and “engaged the suspects”.

“As officers were arriving at the school, they could still hear gunshots,” Douglas County Undersheriff Holly Nicholson-Kluth said.

#UPDATE At least one student has died in school shooting that sent 8 to the hospital #stemshooting https://t.co/bpDeCRwR0C

Student Christian Paulson told television station KMGH that he was in study hall when he saw kids running and shouting, “School shooter”.

“And I’m like, what? Is this real or fake? And then I just went after them,” he said. “Apparently, this is all real. And I tried to run with my life, but I’m out of breath.”

A man who gave his name as Fernando Montoya said his 17-year-old son, a junior at STEM, was shot three times, and one of his friends was also wounded.

Mr Montoya said his son, who was later released from a hospital, told him that one shooter walked into his classroom and opened fire with a gun.

One shooter was already in the classroom, the younger son told his father.

“He said a guy pulled a pistol out of a guitar case and started to shoot,” Mr Montoya told ABC affiliate Denver 7.

As the incident unfolded, medical helicopters landed and took off outside the school, while snipers took up position on nearby roofs. SWAT team officers with rifles secured the area as ambulances and police officers arrived.

Stunned kindergarten pupils and weeping high school students could be seen walking down the steps of a building designated as a “reunification centre”.

Most were holding their parents’ hands.

A student who was not identified told Denver station KUSA-TV outside the school that the violence had left him “a bit shaky” and “scared”, but “glad that I didn’t get hurt”.

The shooting came one week to the day after a 22-year-old gunman opened fire on the Charlotte campus of the University of North Carolina, killing two people and wounding four others before the gunman was disarmed and arrested.

It also came less than a month after the 20th anniversary of the Columbine High School massacre, in which two students killed 13 people before committing suicide in what remains one of the deadliest school shootings in US history.

The Colorado school, which combines elementary, middle and high school on one campus, has 1850 students.

There was no immediate information about the ages or identities of the victims or the suspects. However, The Denver Post reported that the alleged shooters were students of the school – one a juvenile and the other an adult.

They were said to have used at least one handgun but other weapons were unknown.

#ColoradoShooting Man explains how he helped one of the shot teenagers. STEM School Highland Ranch pic.twitter.com/7Hg8oyeP9O

Local television showed dozens of police and fire vehicles surrounding the school as deputies conducted a room-by-room search of the campus.

The Denver Post reported that all schools in the area were placed on lockdown while police and fire crews responded to the scene.

The White House offered a message of condolence.

“Our prayers are with the victims, family members, and all those affected by today’s shooting,” spokesman Judd Deere said.

“The White House has been in communication with state and local officials, and the President has been briefed and continues to monitor the ongoing situation.”