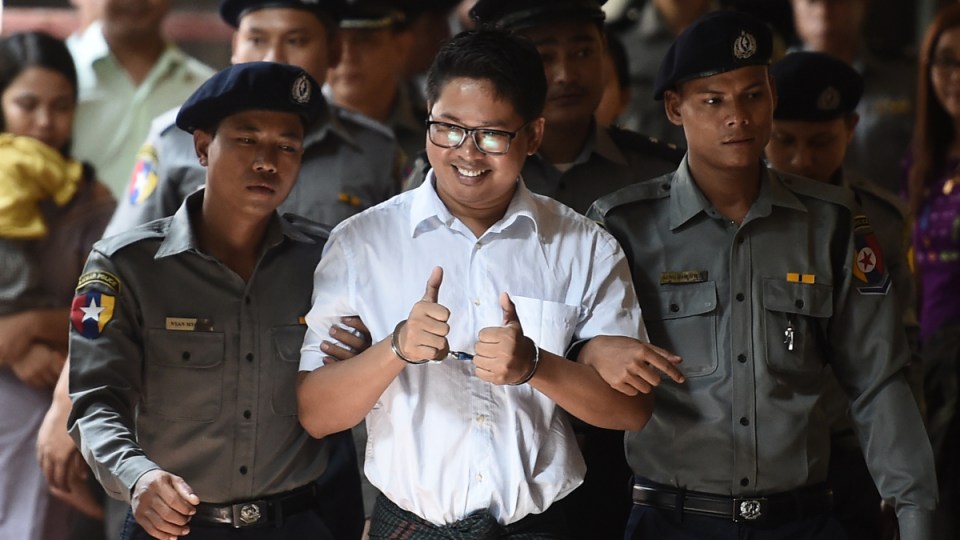 Reuters journalist Wa Lone arrives at court for a hearing in September 2018. He and colleague Kyaw Soe Oo were jailed for seven years. Photo: Getty

Two Reuters journalists jailed in Myanmar for breaking the country’s Official Secrets Act have walked free from prison after more than 500 days behind bars, witnesses say.

The two reporters, Wa Lone, 33, and Kyaw Soe Oo, 29, were convicted in September and sentenced to seven years in jail, in a case that raised questions about Myanmar’s progress toward democracy and sparked an outcry from diplomats and human rights advocates.

The office of President Win Myint said Myanmar would release a total of 6520 prisoners in an amnesty. The two journalists are among them.

It is customary in Myanmar for authorities to free prisoners around the time of the traditional New Year, which began on April 17.

Reuters has consistently said its two journalists had committed no crime, and has been calling for their release. In April, the two men lost their final appeal against their conviction and sentence.

Before their arrest in December 2017, Wa Lone and Kyaw Soe Oo had been working on an investigation into the army crackdown on Myanmar’s Rohingya population. The UN estimates more than 730,000 Rohingya have fled to Bangladesh as a result of the crackdown, which it has labelled ethnic cleansing.

The pair won the Pulitzer Prize for international reporting in May for their report.

Journalists among those freed in mass Myanmar prisoner amnesty