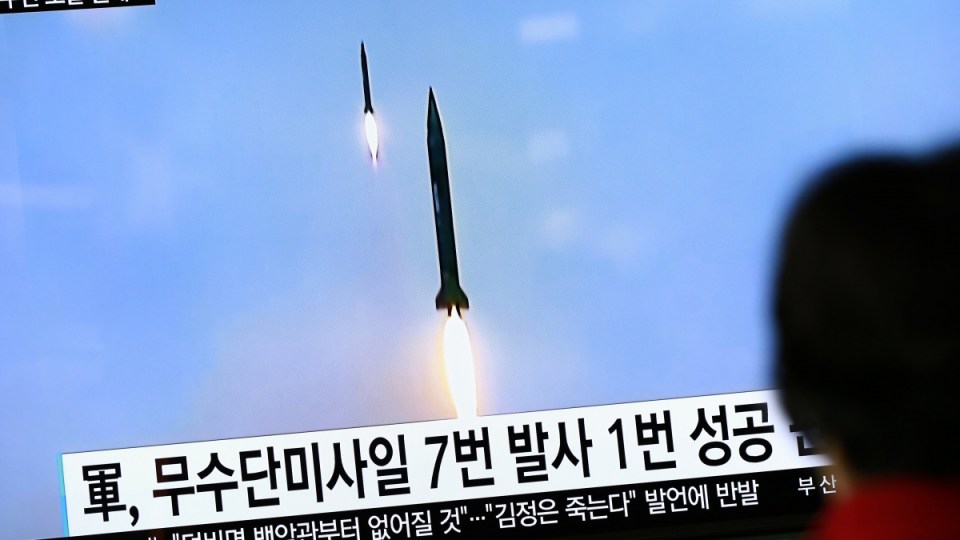 According to the Yonhap News Agency based in Seoul, North Korea “fired a missile from its east coast town of Wonsan in the eastern direction at 9.06 am (10am AEST) today (Saturday),” the JCS said in a release.

US and South Korean authorities were “analysing details of the missile,” it added.

The missiles flew between 70km and up to 200km.

The missile launch comes as denuclearisation talks between the US and North Korea ended abruptly during a second summit between the two leaders Donald Trump and Kim Jong-un in February.

The launch is the first since the North fired an intercontinental ballistic missile (ICBM) in November 2017, before declaring the construction of its nuclear force complete and extending an international olive branch.

Leader Kim Jong-un vowed to cease testing nuclear weapons or ICBMs, but the North has conducted other weapons tests.

The missile firing has added to the pressure it has exerted on Washington in talks on ending the North’s nuclear program.

“It also seems clear that North Korea is angry over what appears to be a lack of flexibility in the Trump administration’s position on relieving sanctions, sticking to a policy of ‘maximum pressure’,” said Harry Kazianis at the Center for the National Interest, a US think tank.

The short-range missile testing is the second public weapons test since the failed February summit. The first in April was reportedly a new type of tactical guided weapon.

The country’s state media Korean Central News Agency (KCNA) did not describe exactly what the weapon was on that occasion, including whether it was a missile or another type of weapon, but “tactical” implies a short-range weapon, as opposed to the long-range ballistic missiles that have been seen as a threat to the United States.

Nevertheless, the missile had a “peculiar mode of guiding flight” and “a powerful warhead”, KCNA said.

“The development and completion of this weapons system will be a great historic event in strengthening the combat capability of the People’s Army,” Mr Kim said, according to KCNA.

Japan’s Defence Ministry said the missiles didn’t reach anywhere near the country’s coast, and there was no security threat.

Japan is thought to be keen to avoid any harsh response as Prime Minister Shinzo Abe seeks to secure his own summit with Mr Kim.