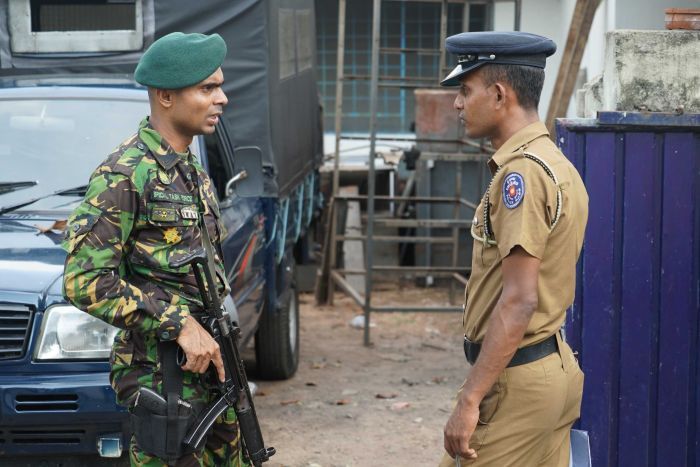 It is believed the Easter Sunday bombings were masterminded in the Ibrahim home in Colombo. Photo: ABC

The pregnant wife of a Sri Lanka bomber detonated a suicide vest when police raided the affluent family’s home in the wake of the terror attacks, killing her own children.

Another of the suicide bombers behind the deadly string of attacks that killed 359 people and injured 500 on Easter Sunday studied in Australia before returning to settle in Sri Lanka.

Sri Lanka’s deputy defence minister Ruwan Wijewardene told a press conference most of the suicide bombers were well-educated and from wealthy families.

Some had law degrees, and all were Sri Lankan, he added.

Two brothers at the centre of the plot were the sons of a wealthy spice merchant, and their sprawling white house is one of the most ostentatious in the suburb where they lived.

One of them, Inshaf Ibrahim, a copper factory owner in his 30s, is believed to have been the mastermind of the bomb plot.

He detonated his explosive device at the busy breakfast buffet of the luxury Shangri-La hotel, a source close to the family said.

The family’s Colombo home was raided by police shortly afterwards.

Mr Wijewardene said that as police arrived, the pregnant wife of one of the brothers detonated a suicide jacket, killing herself and her two children as well as three police officers.

Ilham Ibrahim openly expressed extremist ideologies and had been involved in meetings of National Tawheed Jamaath, a local Islamist group suspected of involvement in planning the attacks, according to the source close to the family.

His entrepreneur brother, Inshaf, was outwardly more moderate in his views, and was known to be generous with donations to his staff and struggling local households, the source said.

He was married to the daughter of a wealthy jewellery manufacturer.

The brothers’ father, Mohamed Ibrahim, was arrested as police investigated those behind the attacks, police said.

Mr Ibrahim, a wealthy spice trader and pillar of the business community, had six sons and three daughters. He was admired by many who knew him.

“He was famous in the area for helping the poor with food and money. It’s unthinkable his children could have done that,” neighbour Fathima Fazla said.

“Because of what they have done, all Muslims are treated as suspects.”

Sri Lanka’s Muslim community — which accounts for 10 per cent of its population — is on edge.

Many Muslim refugees from Pakistan living near Negombo — where a church was blown up — have boarded buses to escape the threat of retaliation.

Farah Jameel, a refugee living in the area, said her family had been chased out by angry locals.

“They are hitting us,” she said.

“Even our landlord is not letting us live here, she is saying to get out of here and go wherever you want to go.”

Muslims living near the Ibrahim family expressed their sorrow that their neighbours were involved in the terror plot.

“Everyone is thinking, what will happen the next moment?

“Even when I sleep I don’t know whether I’ll get up the next morning.”

The failure to act on detailed intelligence pointing to the planned attacks has led to feuds at the highest levels of government, with Sri Lankan President Maithrapala Sirisena asking for the country’s defence secretary and police chief to step down.

“I didn’t know it was going to be scaled up to this,” he said.

Authorities also ignored warnings from the country’s Muslim leaders in January, about an extremist cleric who is believed to have planned the Easter Sunday attacks.

Arrests, interrogations and controlled detonations are still continuing around Sri Lanka, with authorities saying they also plan to beef up security around airports and for airlines.

Australian, UK, US and UAE agencies are helping with investigations.

“Within a couple of days, we will have total control,” Mr Wijewardene said.

The attacks have already had a devastating effect on Sri Lanka’s economy, with mass cancellations of bookings at hotels.

The Colombo Shangri-La hotel, which was bombed, has shut until further notice.

Many hotel staff are not turning up to work, scared that their workplaces will be targeted.

The increased security presence around major centres and night time curfews are continuing.

But there is concern whether the funding, as well as the manpower and training to sustain this degree of security, will be available.

But for now, sweeping emergency powers for the military is the new normal.