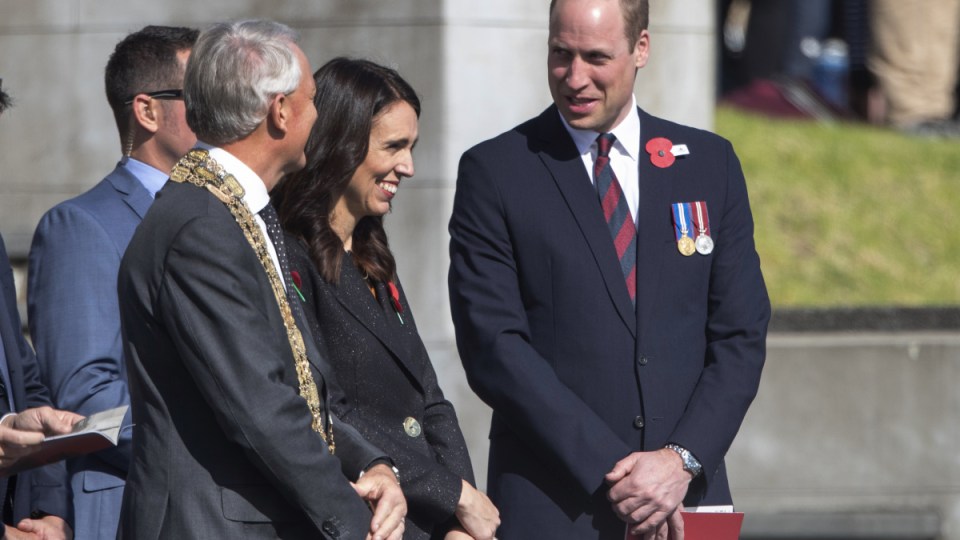 The future King is in New Zealand to pay his respects to the Christchurch victims. Photo: AP

Prince William has paid tribute to Australian and New Zealand soldiers at an Anzac Day service in Auckland as he prepares to visit the survivors of the Christchurch mosque attacks.

Dressed in a dark suit and wearing medals, the Duke of Cambridge on Thursday began his two-day visit to New Zealand by laying a wreath at the civic service at Auckland’s War Memorial Museum.

He stood alongside Prime Minister Jacinda Ardern during the event as the public lined the square and quietly watched.

The March 15 terror attack has loomed over this year’s commemorations in New Zealand.

Dozens of armed police officers stood guard during the hymns and speeches, trucks and buses blocked roads around the site and lookouts kept watch from the museum’s roof.

Numerous other events were cancelled or consolidated ahead of the day, amid lingering security fears.

While William did not speak, Ardern in an emotional speech earlier told those gathered at dawn that the event was a reminder of shared values after the terror attack.

“Let us recommit to always remembering our shared humanity, that there is more that united us than divides us,” she said.

“Our sense of independence is as strong as our sense of responsibility to each other and not just as nation states but as human beings.”

While visiting terror-struck Christchurch will now be the focus for the remainder of the Duke’s trip and events are expected to take a significantly more sombre tone than most royal visits, those attending the Anzac service were pleased to have his support.

“It’s great that [the royal family] are here being supportive,” says Samantha O’Neill, whose husband Carlin is in the air force.

But with the trip kept relatively low-key, others attending were surprised to learn of the William’s attendance.

He will shortly travel to Christchurch to meet with first responders and spend his second day in the country speaking with those still injured and members of the city’s Muslim community.

Organisers have also announced a last-minute walkabout to let the public see the Prince.

It’s not the first time tragedy has brought William to Christchurch.

He visited the city following the deadly 2011 earthquake and last visited with wife Catherine – who won’t be joining him this week – in 2014.

The Duchess of Cambridge will instead attend a commemoration and thanksgiving service in London on Thursday, continuing a 103-year tradition.