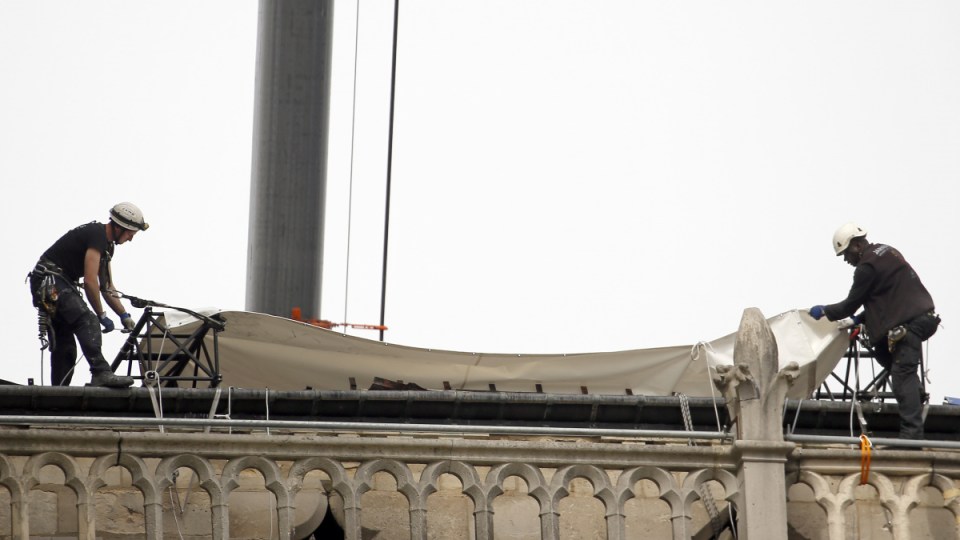 Professional mountain climbers have been hired to install synthetic, waterproof tarps over the gutted, exposed exterior of Notre Dame Cathedral, as authorities race to prevent further damage ahead of storms that are rolling towards Paris.

The looming bad weather threatens to further damage the 850-year-old cathedral whose roof was destroyed by the April 15 blaze, leaving the church to the mercy of the elements.

Architect-in-chief Philippe Villeneuve said he had to rush the installation of the protective covers starting on Tuesday.

“The climbers, since it will be climbers who will do that, and the scaffolders, are ready,” Mr Villeneuve told BFMTV.

“The beams are there, the tarpaulin on its way … The highest priority is to protect the cathedral from the rain to come.”

Heavy rain is forecast for Paris from early on Wednesday (local time).

The tarpaulins will provide cover in the short-term, but will eventually be replaced with a sturdier temporary roof that will remain in place throughout the work to restore Notre Dame.

Ahead of the looming bad weather and the tarpaulins’ installation, some of Notre Dame’s remaining statues were removed by crane. Later, workers began dragging the tarpaulins over vulnerable parts of the fire-damaged structure.

Parts of the historic cathedral, including its partially-destroyed vaulted ceiling, had already been soaked with water after firefighters desperately fought the blaze for more than 12 hours that day.

Hundreds of millions of dollars have already been pledged from around the world to help with rebuilding the church. French President Emmanuel Macron has said he wants it open again within five years – in time for the 2024 Paris Olympic Games.