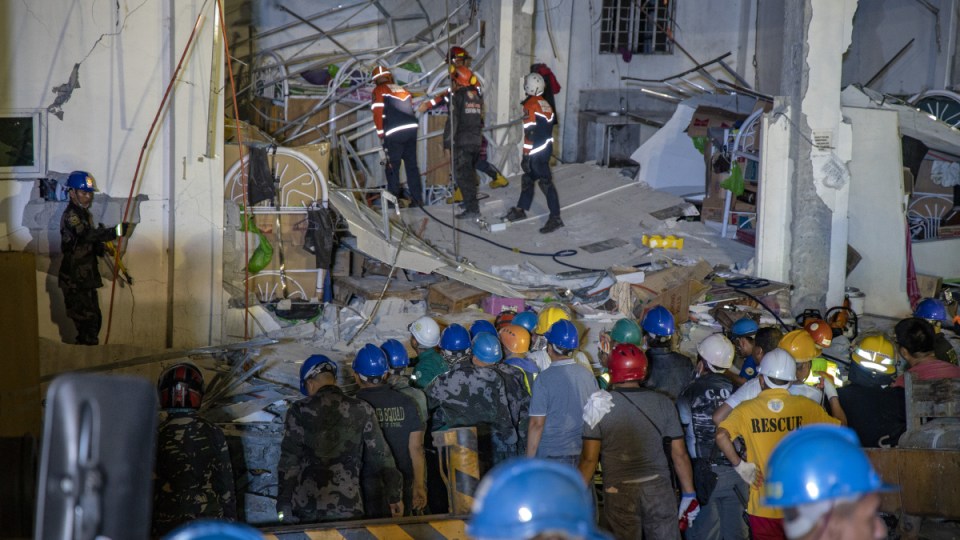 Rescuers search for survivors trapped in the debris of a four-storey commercial building at Porac, Philippines. Photo: Getty

A second earthquake has hit the Philippines as rescue teams searched for signs of life beneath the rubble of a collapsed four-storey commercial building after a strong earthquake shook the country’s biggest island a day earlier.

The US Geological Survey said an earthquake with a magnitude of 6.5 struck in Samar in the southern Philippines on Tuesday afternoon.

There were no immediate reports of destruction there, but the national seismology agency said damage could be expected from what it recorded as a 6.2 magnitude quake.

The death toll from the first quake rose to 15.

Heavy lifting equipment and search dogs were used as dozens of firefighters, military and civilian rescue teams raced to shift lumps of concrete in a commercial area of Porac, about 110 kilometres north of Manila, where a 6.1 magnitude earthquake damaged several buildings on Monday.

Two people were rescued there on Tuesday, adding to seven found alive and four found dead overnight in the mix of rubble and mangled metal that caved in on a ground-floor supermarket in the worst recorded incident.

Most deaths were confined to parts of Pampanga province, where the governor said investigations would be held to determine why only certain buildings were damaged while others were intact.

After Luzon quake, Visayas is shaken by a magnitude 6.2 tremor. Here are some items you should pack in case disaster strikes. Keep safe https://t.co/sDo55hwVGt pic.twitter.com/1LMLHDpRft

The Philippines is prone to natural disasters and is located on the seismically active Pacific “Ring of Fire”, a horse shoe-shaped band of volcanoes and fault lines that arcs round the edge of the Pacific Ocean.

The earthquake was felt strongly in key business areas of Manila, with residential and office buildings evacuated after being shaken for several minutes. Train services were halted and roads and sidewalks were clogged by the sudden exodus of workers.

The government declared Tuesday a holiday for civil servants in Metro Manila to allow for safety inspections of buildings.

The international airport at Clark, a former US military base in Pampanga, remained closed for repairs, while parts of one corner of a historic church in the province collapsed.

Earlier, extraordinary vision posted to social media shows a rooftop pool emptying over the sides of a Manila high-rise as the city is rocked by a magnitude 6.1 earthquake.

The quake struck the Philippines’ main island of Luzon on Monday, bringing down a four-storey commercial building.

The quake hit 60 kilometres north-west of the capital Manila on Monday afternoon, disrupting air, rail and road transport and causing some damage to buildings and infrastructure.

Heavy lifting equipment and search dogs were brought in as dozens of firefighters, military and civilian rescue teams raced to shift piles of concrete in the town of Porac.

The 6.3 magnitude #Earthquake spilled the water of the swimming pool in Anchor Skysuites, a residential skyscraper at the Binondo district in #Manila, #Philippines #EarthquakeManila #EarthquakePH #LindolPH pic.twitter.com/vBzb148m8i

During Monday night, seven people were rescued and four dead bodies were pulled out of the rubble of the commercial building, which had caved in on a ground-floor supermarket, officials said.

“The rescue is ongoing, they are still hearing a sound, no one can say how many were still trapped,” Pampanga provincial governor Lilia Pineda said in a radio interview.

“They can be heard crying in pain … It won’t be easy to rescue them.”

The quake, which struck at 5pm local time on Monday, was initially reported as being of 6.3 magnitude and later revised down to 6.1 magnitude, the US Geological Survey and Philippines seismology authorities said.

Pampanga’s international airport at Clark, a former US military base, was closed and scores of flights were cancelled after damage.

Rescue teams in Manila were preparing to reinforce efforts to reach people trapped in Pampanga.

The government urged people to be calm as rumours of greater death and destruction gained traction online.

“We urge them to refrain from spreading disinformation in social media that may cause undue alarm, panic and stress,” presidential spokesman Salvador Panelo said.

The earthquake hit shortly after 5pm local time in Manila and caused tall buildings to sway for several minutes in the main business districts.

“We got nervous, we got dizzy. I ran downstairs with three kids,” domestic worker Arlene Puno said.

Elevated rail services were halted and workers were evacuated from offices and condominiums, sending a flood of people onto footpaths and into bus queues and adding more chaos to Manila’s already congested roads.