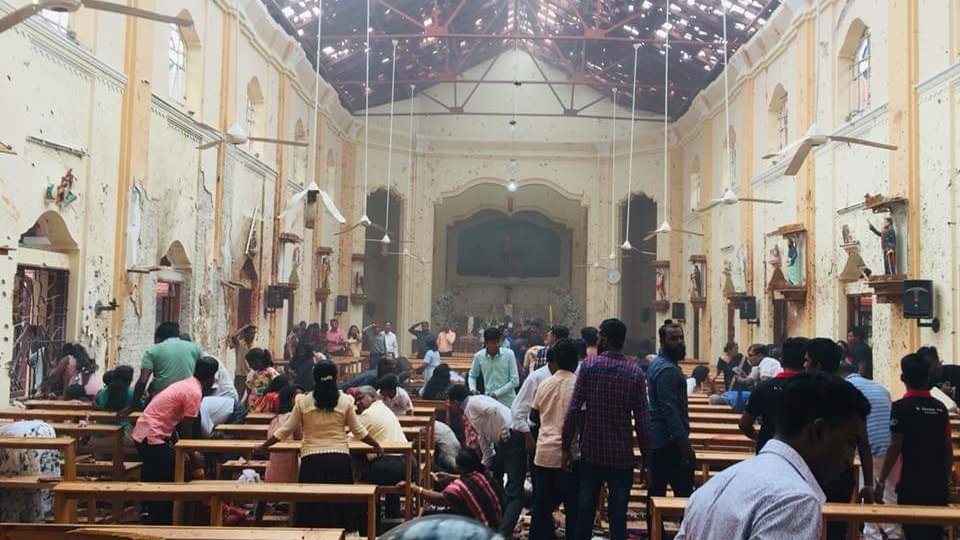 The church appeared to have its roof blown off by the power of the blast. Photo: Facebook

Two Australians have been identified among the 290 people killed in Sri Lanka’s horrific Easter church and hotel bomb blasts.

Prime Minister Scott Morrison told a media gathering on Monday afternoon that the deceased – one of which was a dual national – were from the same family.

They lived in Sri Lanka.

Australian media reported later on Monday that the Australian Sinhalese community is in mourning after the news that Manik Suriaaratchi and her 10-year-old daughter Alexandria were killed when a bomb went off inside the church at Negombo.

Ms Suriaaratchi was the managing director and founder of Omega Global, an international asset management firm based in Sri Lanka.

Ms Suriaaratchi also helped establish a lab to prevent the spread of mosquito-borne diseases, such as zika and yellow fever in Sri Lanka.

Mr Morrison also said two other dual-national Australians – women in their late 20s and mid-50s – had been among the injured.

One suffered a shrapnel wound, while the other suffered a broken leg in the blasts.

The news comes as police in Sri Lanka are interrogating dozens of suspects, as the death toll from the terror attacks rose to 290 by Monday morning.

More than 450 people across the country are being treated for injuries sustained in the eight explosions, while local and international families learn of the deaths of their relatives, many of whom were Christians celebrating and worshipping on Easter Sunday.

Another bomb device has since been found near the airport in the capital Colombo, and was destroyed before it could cause harm.

The dead included three police officers, who died when a bomb went off as they raided a house looking for the suspected terrorists.

Australian tourists were caught up in the devastation, with authorities confirming one Aussie was among the injured.

“There were people screaming and dead bodies all around,” Australian man Sam told 3AW radio.

“Kids crying, kids on the ground … I don’t know if they were dead or not.”

Sam said he and a friend were having breakfast at the Shangri-La Hotel when two blasts went off, causing “absolute carnage”.

They had seen two men wearing backpacks seconds before the explosions, he said.

Colombo resident Bhanuka Harischandra told AAP how he saw bodies being dragged out of the bombed sites.

The 24-year-old was heading in to Shangri-La Hotel for a meeting when it was bombed on Sunday.

“It was panic mode … there was blood everywhere,” he said.

Meanwhile, the Sri Lankan government has confirmed it had “prior information” on the attacks, raising questions about what action was taken to prevent the devastation.

It has been revealed intelligence sources had been told 10 days earlier of possible attacks by radical Muslims, prompting Prime Minister Ranil Wickremesinghe to question why he and other ministers were not informed.

Sri Lanka’s Minister for Telecommunications, Foreign Employment and Sports, Harin Fernando, tweeted on Sunday night that intelligence officers had knowledge of the attacks but there was a “delay in action”.

Some intelligence officers were aware of this incidence. Therefore there was a delay in action. What my father heard was also from an intelligence officer. Serious action need to be taken as to why this warning was ignored. I was in Badulla last night pic.twitter.com/ssJyItJF1x

The initial bombs targeted the Christian minority, and tourists, exploding almost simultaneously during Easter services at churches on Sunday morning in Colombo’s Kochchikade district, the Catholic-majority town of Negombo and the eastern town of Batticaloa.

Additional blasts ripped through three high-end hotels in Colombo, including the Shangri-La, Cinnamon Grand and Kingsbury Hotel, as well as the Tropical Inn Guest House near the Dehiwala Zoo, south of Colombo.

The final explosion occurred in a house in the Dematagoda area of Colombo on Sunday afternoon (local time) when police went to question suspects.

It’s believed the officers had been responding to a tip-off.

The New York Times reported on Monday afternoon that there were 24 people in custody over the attacks.

Up to 32 of the dead were foreigners, including five British people, two of whom had dual US citizenship, and three Indians, according to officials in those countries.

There were no immediate claims of responsibility, however Sri Lankan government officials have condemned the co-ordinated attacks as acts of terror.

Attention is turning to an Islamist group; a minister earlier said it was a terrorist attack by religious extremists.

PM Wickremsinghe acknowledged the government had some “prior information of the attack” though ministers were not told.

He said there wasn’t an adequate response and there needed to be an inquiry into how the information was used.

He also said the government needs to look at the international links of a local militant group.

The Sri Lankan government declared a temporary social media ban and a curfew after the string of explosions.

The Times of India also reported that Sri Lanka’s police chief last week issued a nationwide alert that suicide bombers had planned to hit “prominent churches” and “the Indian high commission in Colombo”.

The police chief had cited radical Muslim group National Thowheeth Jama’ath (NTJ), which came to attention last year after it was linked to the vandalism of Buddhist statues, The Times reported.

St Sebastian’s Church in Negombo posted pictures of destruction inside the church on its Facebook page, showing blood on pews and the floor, and requested help from the public.

More than 50 people are believed to have been killed at St Sebastian’s alone, a police official told Reuters, with pictures showing the bedlam under the destroyed roof.

The explosions have rocked a country that had put an end to its civil war between Tamil separatists and government forced 10 years ago.

The archbishop of Sri Lanka, Cardinal Malcolm Ranjith, has urged the government to identity the attackers and “punish them mercilessly because only animals can behave like that”.

“I condemn to the utmost of my capacity this act that has caused so much death and suffering to the people,” he said.

The Prime Minister called a national security council meeting at his home for later in the day on Sunday.

“I strongly condemn the cowardly attacks on our people today. I call upon all Sri Lankans during this tragic time to remain united and strong,” he said in a tweet.

I strongly condemn the cowardly attacks on our people today. I call upon all Sri Lankans during this tragic time to remain united and strong. Please avoid propagating unverified reports and speculation. The government is taking immediate steps to contain this situation.

Sri Lankan Christians make up 7.6 per cent of the predominantly Buddhist country’s total population of 22.4 million.

An estimated 82 per cent of Sri Lankan Christians belong to the Roman Catholic Church.

Last year, there were 86 verified incidents of discrimination, threats and violence against Christians, according to the National Christian Evangelical Alliance of Sri Lanka (NCEASL), which represents more than 200 churches and other Christian organisations.

This year, the NCEASL recorded 26 such incidents.

US vice president Mike Pence described the atrocity as an “attack on Christianity and religious freedom everywhere” and said he and President Donald Trump were monitoring the situation.

.@POTUS and I are monitoring the horrific attacks on those celebrating Easter in Sri Lanka. Our hearts & prayers are with the victims & their families. This atrocity is an attack on Christianity & religious freedom everywhere. No one should ever be in fear in a house of worship.

The respective prime ministers of India and Pakistan are among the world leaders who have condemned the attacks.

“As Easter Sunday draws to a conclusion here in Australia, our heart goes out to those Christians and all of those other innocents who have been slaughtered today in this horrific terrorist attack,” Mr Morrison said.

“We still don’t know who was responsible for this or what their motivation was, but we do know that innocent lives have been stolen once again, and our heartfelt sympathies go out to all of those who are bereaved tonight, us included, as we just share this sorrow.”

I am deeply shocked and saddened by the targeted attacks in places of worship and celebration on Easter Sunday in Sri Lanka. I have spoken with our High Commissioner and our officials are working with Sri Lankan agencies at this difficult time. https://t.co/VL4FdlK8Xo

In a statement, the Australian government’s Department of Foreign Affairs and Trade said the Australian High Commission in Colombo was making urgent inquiries with local authorities to determine the welfare of any Australians affected.

Australians concerned about the welfare of family and friends in the area are urged to contact them directly.

Two Australians among the 290 killed in Sri Lanka blasts