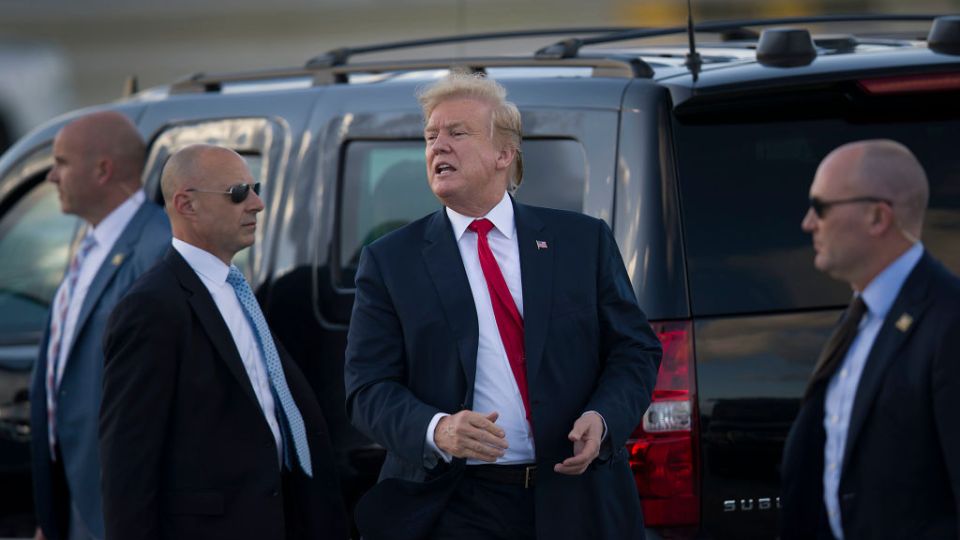 Donald Trump talks with supporters after arriving on Air Force One at the Palm Beach International Airport to spend Easter weekend at his Mar-a-Lago resort. Photo: Getty

The Democrats have issued a subpoena for the full Mueller report into Russian interference in the 2016 USA presidential election.

It comes as US Senator Elizabeth Warren became the first Democratic 2020 presidential candidate to call for President Donald Trump’s impeachment.

Special counsel Robert Mueller’s redacted report found no evidence of a conspiracy between Russia and the Trump campaign and made no verdict on obstruction of justice.

Mueller did find, however, that Trump made numerous attempts to interfere with the investigation but was largely foiled by those around him.

Mr Trump has been tweeting about the “Crazy Mueller Report” calling it an “Illegally Started Hoax” and describing statements about him as “total bullshit”.

….big, fat, waste of time, energy and money – $30,000,000 to be exact. It is now finally time to turn the tables and bring justice to some very sick and dangerous people who have committed very serious crimes, perhaps even Spying or Treason. This should never happen again!

Robert S. Mueller III revealed a frantic, months-long effort by President Donald Trump to thwart the investigation into Russia’s 2016 election interference, cataloging in a report released on Thursday (US time) the attempts by Mr Trump to escape an inquiry that imperilled his presidency from the start.

The much-anticipated report laid out how a team of prosecutors working for Mr Mueller, the special counsel, wrestled with whether the President’s actions added up to an indictable offence of obstruction of justice for a sitting president. They ultimately decided not to charge Mr Trump, citing numerous legal and factual constraints, but pointedly declined to exonerate him.

“If we had confidence after a thorough investigation of the facts that the President clearly did not commit obstruction of justice, we would so state,” Mr Mueller’s investigators wrote. “Based on the facts and the applicable legal standards, however, we are unable to reach that judgment.”

Mr Mueller inherited a sweeping inquiry 23 months ago into whether Mr Trump or any of his aides had coordinated with the Russian government’s campaign to sabotage the presidential election. The report found numerous contacts between Trump campaign advisers and Russians in the months before and after the election — meetings in pursuit of business deals, policy initiatives and political dirt about Hillary Clinton — but said there was “insufficient evidence” to establish that there had been a criminal conspiracy.

“The Mueller Report is perhaps the single most humiliating thing that has ever happened to the White House Press in the history of this Country. They know they lied…Many reporters lied about Russia Collusion and so much more. Clapper & Brennan, all lies” @TuckerCarlson

While the report does not find that the president or his campaign aides had committed any crimes in their contacts with Russians, it lays bare how Mr Trump was elected with the help of a foreign power. When a federal inquiry was started to investigate the Russian effort, he took numerous steps to try to undermine it.

The special counsel found that Mr Trump had the authority to make many of his most controversial decisions, including the firing of James Comey as FBI director, by virtue of the powers the Constitution grants him. At the same time, it is a far more damning portrayal of his behaviour than the one presented last month in a four-page letter released last month by Attorney General William Barr.

“The incidents were often carried out through one-on-one meetings in which the president sought to use his official power outside of usual channels,” the report said.

“These actions ranged from efforts to remove the special counsel and to reverse the effect of the attorney general’s recusal; to the attempted use of official power to limit the scope of the investigation; to direct and indirect contacts with witnesses with the potential to influence their testimony. Viewing the acts collectively can help to illuminate their significance.”

In his letter, Mr Barr announced that — while Mr Mueller had made no judgment about whether Mr Trump had obstructed justice — he had decided the President had not.

Mr Barr defended this decision in a news conference Thursday morning (US time), and said that some of Mr Trump’s actions were understandable given the “context” of his situation.

“There is substantial evidence to show that the President was frustrated and angered by a sincere belief that the investigation was undermining his presidency, propelled by his political opponents and fuelled by illegal leaks,” he said.

The report is a sometimes gripping account of a presidency consumed by a sprawling investigation, and of a president seized by paranoia about what it might unearth.

Immediately after learning that a special counsel had been appointed to lead the Russia investigation, the report said, Mr Trump became distraught and slumped in his chair.

“Oh my God. This is terrible,” he said. “This is the end of my presidency.”

Last month’s release of Mr Mueller’s primary conclusions seemed to blunt any momentum on Capitol Hill to initiate impeachment proceedings against Mr Trump, and it appeared unlikely that the far more detailed accounting of the special counsel’s work would change that dynamic.

But Thursday, top Democratic lawmakers seized on the report’s findings and suggested that the issue of impeachment was not settled. At the very least, Mr Mueller’s report seems certain to give Democratic lawmakers — and the many Democratic presidential candidates — ample political fodder for attacks on the president until November 2020, when Mr Trump will stand for re-election.

The release is the culmination of an investigation that consumed the national political conversation for nearly two years and was freighted with the outsized expectations of Mr Trump’s most fervent critics.

Mr Mueller achieved a cult status among some Americans obsessed with the prospect that he might deliver a report that would imperil the Trump presidency — an image fuelled by his general refusal to give public signals about the direction of his investigation.

Mr Mueller and his staff seemed monkish and enigmatic, choosing to speak only in court appearances and highly detailed indictments of Russian intelligence operatives or some of the President’s advisers.

Some Americans invested so much hope in the Mr Mueller investigation that they made plans to hold rallies in predetermined locations if Mr Trump fired the special counsel and terminated the investigation.

He never did. Instead, Mr Mueller and his team were able to complete an investigation that amassed information from thousands of subpoenas, hundreds of search warrants and evidence turned over from more than a dozen foreign governments.

A timeline of the Mueller investigation

The Mueller investigation began in May 2017, but its origins go back nearly a year earlier. The FBI opened the original inquiry into possible ties between the Trump campaign and Russia in July 2016, in the midst of a heated presidential election contest that, the world now knows, Moscow made a concerted effort to sabotage.

Determining the scope of the Russian interference campaign was a centerpiece of the Mueller investigation, and will likely be one of its enduring legacies. His report leaves no doubt that it was the Russian government that orchestrated the effort, and that many of Trump’s aides welcomed it — even if they did not actively coordinate with Moscow.

At the very least, in the face of repeated Russian efforts to make contact with Trump’s advisers, none of them thought to contact the FBI.

When Mr Mueller began his work, there were still prominent voices at both ends of the political spectrum openly debating whether the hacking and leaking of emails — and the fake news that spread like a wildfire on social media in the months before the election — was the work of Russia, China, stateless hackers, or, as Mr Trump once liked to say, “someone sitting on their bed that weighs 400 pounds”.

Most of those voices of doubt fell silent after the special counsel’s team last year secured two indictments against a total of 25 Russian military intelligence operatives and experts in social media manipulation. The indictments gave exquisite details about the entirety of the Russian operation — how Russians paid unsuspecting Americans to stage pro-Trump rallies in battleground states, how Russian hackers penetrated the personal email account of Ms Clinton’s campaign chairman and how a pair of Russian women took a scouting trip to the United States two years before the election to gather information for the planned assault.

Mr Mueller and his team took over the FBI investigation days after Trump fired Mr Comey and after senior law enforcement officials had opened a parallel investigation into whether the president had obstructed justice in his moves that appeared meant to derail the Russia inquiry.

Mr Trump long denounced the inquiry as a politically motivated witch hunt. But since it began, a half-dozen former Trump aides have been indicted or convicted of crimes, most of them for lying to Congress or federal investigators.

‘This is the end of my presidency’: Mueller reveals Trump’s efforts to thwart Russia probe