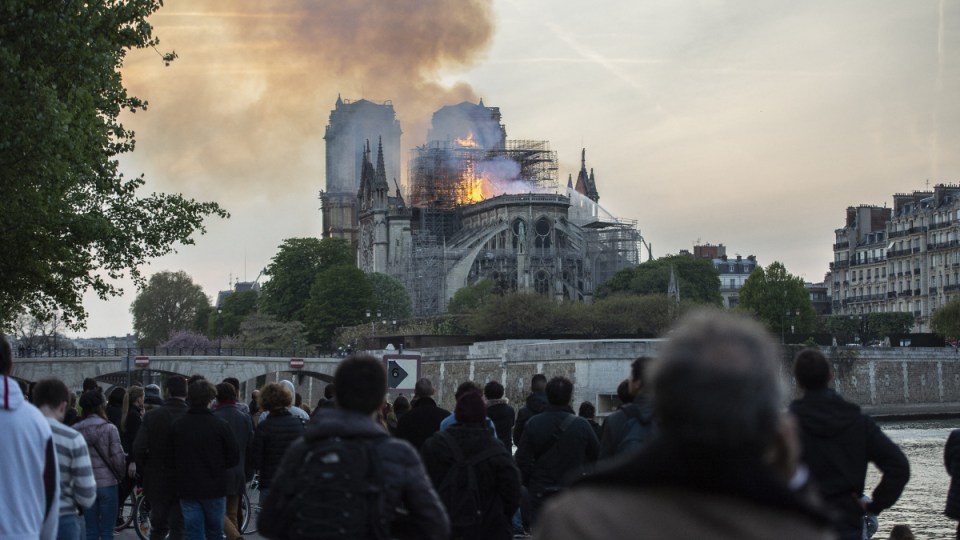 Hundreds of millions of dollars have been pledged as part of the effort to rebuild the fire-ravaged Notre Dame Cathedral.

Rather than focusing on what was lost in the devastating fire only hours earlier, billionaires and corporations had already pledged huge figures to help restore the world-famous landmark on the banks of the Seine River.

Francois-Henri Pinault, who is best known as the husband of actor Salma Hayek and the CEO behind French luxury fashion group Kering –which includes Gucci, Yves Saint Laurent, Balenciaga, Alexander McQueen and Bottega Veneta among its brands – pledged €100 million euros.

“This tragedy is striking all the French people, and beyond that, all those attached to spiritual values,” Mr Pinault said.

“Faced with this tragedy, everyone wishes to give life back to this jewel of our heritage as soon as possible.”

Earlier on Tuesday, Prime Minister Scott Morrison scotched the idea of Australian taxpayers helping to foot the bill for the rebuild, saying the French and the Catholic Church can pay for it themselves.

Mr Morrison dismissed a suggestion by his predecessor Malcolm Turnbull that the government should establish a charitable fund for people who wanted to donate to restoration efforts.

“I’m sure that President [Emmanuel] Macron is able to deal with this – as is the Catholic Church – and, if individual Australians want to do something, well, it’s a free country – they can do whatever they like,” he told reporters in the Victorian Surf Coast town of Torquay.

Mr Shorten noted the “brooding, gothic cathedral” had been an important landmark in the days before GPS when he visited Paris as a young backpacker, and again during early morning runs on a more recent visit.

“I think we, all of us who’ve enjoyed that architecture, that history, we too should perhaps rally around and help Paris and Notre Dame.”

The massive fire gutted and destroyed the roof of Notre Dame, but firefighters say they have saved the shell of the stone structure from collapse.

Unfortunately, Notre Dame’s 90-metre medieval spire could not be saved and crashed to the ground, drawing gasps and moans of disbelief from onlookers.

Thankfully, the cathedral’s medieval stone vaults may have saved the structure from complete devastation – just as it had survived revolution, two world wars and other threats since being built 850 years ago.

Dr Robert Bork, an architectural historian at the University of Iowa, told the ABC that the vaults acted as a buffer for the fire after it burned through wooden structures.

“The vaults are designed to be in dialogue with the buttressing system of the building … and if [Notre Dame] didn’t have them, the buttresses would have just had brick walls and in cases where you just have a timber roof building and the roof burns off, frequently those walls will collapse,” Dr Bork said.

The New York Times reports the fire appears to have been an accident, with Paris prosecutor Rémy Heitz saying: “Nothing at this stage suggests a voluntary act”.

Mr Heitz said that nearly 50 investigators were working to determine the cause of the fire, but that “it will be a long and complex investigation”.

No fire was found after the first alarm was triggered at 6.20pm. But a fire was discovered in the wooden framework of the attic when a second alarm sounded at 6.43pm.

Emergency officials inspected the structural integrity of the building on Tuesday, hopeful it will not collapse.

Heartfelt tributes have flowed from around the world after flames ripped through the historic landmark on Tuesday morning, Australian time.

The news of the cathedral fire surfaced just as one of Islam’s holiest sites also suffered fire damage in Jerusalem almost simultaneously.

Footage showing smoke and fire emerging from the revered Al-Aqsa Mosque compound in the structure known as the Marwani Prayer Room, or Solomon’s Stables, could be seen on social media.

The Palestine News Agency reported that “the fire broke out in the guard’s room outside the roof of the Marwani Prayer Room, and the fire brigade of the Islamic Waqf handled the matter successfully”.

Back in Paris, fire chief Jean-Claude Gallet believed the two towers of Notre Dame had been saved.

“We now consider that the main structure of Notre Dame has been saved and preserved.”

While the blaze has been brought under control, fire crews worked  into the night (Paris time) to cool down the cathedral’s interior.

No deaths have been reported, but two police officers and one firefighter were injured.

Mr Macron said the cathedral was a huge part of France.

“Notre Dame is our history, our literature, part of our psyche, the place of all our great events, our epidemics, our wars, our liberations, the epicentre of our lives,” he said.

“Let’s be proud, because we built this cathedral more than 800 years ago, we’ve built it and, throughout the centuries, let it grow and improved it. So I solemnly say tonight: we will rebuild it together.”

The fire broke out just minutes after the cathedral, which celebrated its 850th jubilee in 2013, closed to the public.

Firefighters said they cleared the area around Notre Dame and evacuated surrounding buildings.

It is deemed one of the world’s most visited landmarks and is said to attract about 30,000 people every day.

Church spokesman Andre Finot told French media the entire timber interior, which dates back to the 12th century, had been engulfed in flames.

“Everything is burning. Nothing will remain from the frame,” Mr Finot said.

#NotreDame: 'The roof has entirely collapsed, there are flames coming out the back of the cathedral as if it was a torch'@charli, Journalist at France 24, at the scene of the fire. pic.twitter.com/2B0IrMiDcL

Smoke could be seen billowing out from the top of the gothic cathedral, as flames leapt out beside its two bell towers, a Reuters witness said.

The peak of the cathedral has been undergoing a 6 million-Euro ($6.8 million) renovation, with some sections under scaffolding. French media quoted the Paris fire brigade as saying the fire is “potentially linked” to the renovation work.

Just last week, 16 bronze religious statues were removed to be cleaned and allow the renovation to go on. It was reportedly the first time in more than a century they had been moved.

US President Donald Trump said the incident in Paris was “horrible to watch” and offered suggestions for how first responders should tackle the massive fire.

“Perhaps flying water tankers could be used to put it out,” Mr Trump tweeted, adding “Must act quickly!”

Vice President Mike Pence and first lady Melania Trump also took to Twitter to express their devastation at the fire.

“Notre Dame is an iconic symbol of faith to people all over the world — and it is heartbreaking to see a house of God in flames. Our thoughts and prayers are with the firefighters on the scene and all the people of Paris,” Mr Pence said.

Mrs Trump said she was “praying for everyone’s safety”.

“My heart breaks for the people of Paris after seeing the fire at Notre Dame Cathedral,” she tweeted.

Notre Dame is a centre of the Catholic faith, but has also been a target of political upheaval in its long history.

It was ransacked by rioting Protestant Huguenots in the 16th century, pillaged again during the French Revolution of the 1790s and left in a state of semi-neglect.

Victor Hugo used the cathedral as a setting for his 1831 novel, The Hunchback of Notre-Dame. Quasimodo, the main character, is feared by Parisians because of his deformity but finds sanctuary in the cathedral and is employed as a bell-ringer.

Hugo’s 1831 work led to a revived interest in the cathedral and a major – partly botched – restoration that began in 1844.