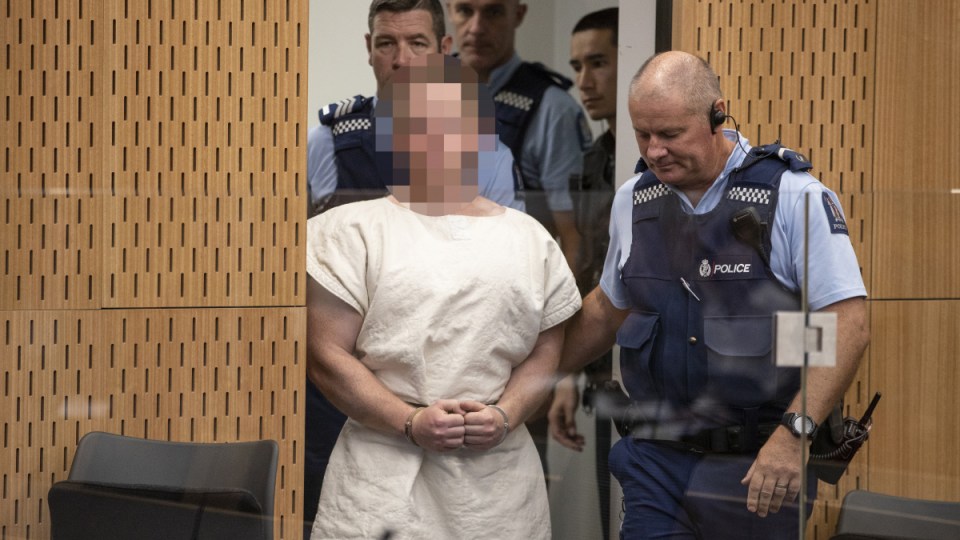 A Christchurch court has ordered the Australian man arrested after the shooting attack on two of the city’s mosques three weeks ago to undergo mental health tests before his case proceeds.

Brenton Harrison Tarrant, 28, appeared via videolink from Auckland at the High Court in Christchurch at 10am on Friday morning (local time) where 50 counts of murder and 39 counts of attempted murder were laid.

A silent and largely motionless Tarrant appeared on a large screen in the courtroom, a small cell showing in the background.

The courtroom’s public gallery was packed by dozens of friends and families of the victims, some who stared quietly at the defendant throughout.

During the half-hour hearing Justice Cameron Mander ordered Tarrant undergo two assessments to determine whether he may be mentally impaired, legally insane or fit to stand trial.  This is a routine step during many New Zealand trials.

He also ordered the names be suppressed of those Tarrant is accused of attempting to kill.

Tarrant remains in custody and will return to court on June 14.

On March 15, Tarrant was arrested within half an hour of the terror attacks but was formally charged with only a single count of murder before his first court appearance on March 16.

Police on Thursday confirmed they had laid 50 counts of murder and 39 of attempted murder.

The largely procedural hearing was also expected to confirm whether Mr Tarrant, as reported, intended to represent himself at trial.

However, on Thursday night Auckland-based defence lawyers Shane Tait and Jonathon Hudson said they agreed to represent him, according to New Zealand media.

Mr Tait told the court on Friday he planned to seek a psychiatric assessment of his client, which could take up to three months, Fairfax NZ reported.

“I can appreciate the court’s concern of delay, but there are more pressing concerns of fair trial,” Tait told the court.

The prospect had raised concerns the self-labelled white supremacist could use the legal process to espouse extremist views.

Despite labelling the shooting an act of terrorism, authorities had not said whether the former NSW resident would be the first person charged under New Zealand’s anti-terror laws before his appearance.

The country’s terrorism legislation has in the past proved unwieldy and complex. Legal experts have also warned terror charges might complicate the prosecution for no material difference in outcome if Tarrant is convicted.

“Other charges are still under consideration,” police said on Thursday.

Mr Tarrant is being held in New Zealand’s only maximum-security prison in Auckland. He has had no access to television, radio, newspapers or visitors.

According to New Zealand media, Mr Tarrant lodged a formal complaint about that lack of access to outside media.

“He is being managed in accordance with the provisions set out in the Corrections Act 2004 and our international obligations for the treatment of prisoners,” a Corrections spokesperson said last week.

Meanwhile, Australia’s Home Affairs secretary Michael Pezzullo has told a Senate hearing that security agencies had no information to suggest  Mr Tarrant should have been placed on a watchlist or prevented from leaving the country.

Mr Pezzullo, who is responsible for most of the country’s security and intelligence edifice, said Mr Tarrant had spent just 45 days in Australia in the past few years.

“There was no reason to restrict his movement because nothing had come to attention … to suggest that he was on a pathway to violence,” Mr Pezzullo told the budget estimates hearing in Canberra.

“There was nothing in any of our systems that would have suggested that either this person’s travel be restricted, or that he otherwise be the subject of law enforcement attention, up to and including arrest.”

Tarrant had travelled extensively since 2010 before settling in the southern New Zealand city of Dunedin.

In response to the shooting, New Zealand politicians have almost unanimously been pushing tightened gun laws through parliament in recent days.

A ban on military-style semi-automatic rifles, like those used in the attack, is expected to be in place by the end of next week.